The 20 Best Modern Vampire Movies, 1979 to the Present 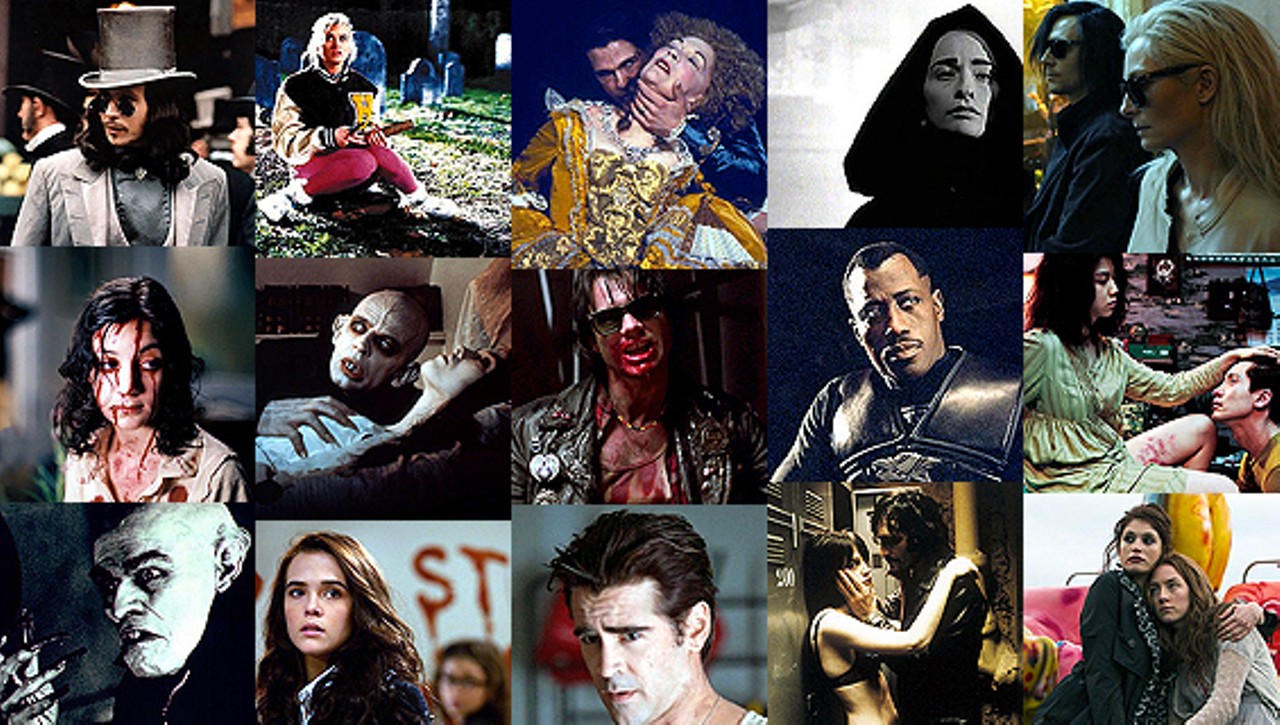 For every failure, there are numerous modern vampire movies that manage to plumb and toy with the creature's mythology in imaginative ways. The breadth of the directors featured here -- from French auteur Claire Denis to Germany's Werner Herzog to American mavericks Jim Jarmusch and Francis Ford Coppola -- speaks to the wide variety of voices that have tackled the genre with such ingenuity in recent decades.

20. Vamps (2012)
At times winningly dopey but still easily forgotten, Amy Heckerling's undead-BFFs comedy Vamps sends up our pop-cultural fascination with bloodsucking but is itself a bit stiff with rigor mortis. "Remember: We said we'd keep up with the times, even if they aren't as good as the '80s," Stacy (Krysten Ritter), her coffin lined with pinups of Michael J. Fox and Matt Dillon, admonishes Goody (Alicia Silverstone). In staying current, the vampiresses constantly -- and to diminishing effect -- point out the vapidity of Jersey Shore and iEverything. -- Melissa Anderson

19. The Twilight Saga: Breaking Dawn -- Part 2 (2002)
The five flicks in the Twilight franchise started silly, but kept getting better. The grand finale, Breaking Dawn -- Part 2, is a goofy masterpiece that's two parts Douglas Sirk to one part violent mayhem, climaxing with a vampires-versus-vampires-versus-werewolves battle that's so over the top, audiences at the premiere screamed themselves senseless. -- Amy Nicholson

18. Fright Night (2011)
Senior Charlie Brewster finally has it all going on: He's running with the popular crowd and dating the most coveted girl in his high school. In fact, he's so cool he's even dissing his best friend. But trouble arrives when Jerry moves in next door. He seems like a great guy at first, but there's something not quite right -- but everyone, including Charlie's mom, doesn't notice. After observing some very strange activity, Charlie comes to an unmistakable conclusion: Jerry is a vampire preying on the neighborhood. Unable to convince anyone, Charlie has to find a way to get rid of the monster himself.

17. Vampire Academy (2014)
Consider this: Director Mark Waters helmed Mean Girls, and screenwriter Daniel Waters penned Heathers. People dismiss films about teen girls, as though that audience's agonies and fears and passions are forever lesser than those of a grown man in tights. But the Waters brothers' work can't be tossed aside. Like their earlier comedies, Vampire Academy nimbly balances teen paranoia with real threats (here, the deadly Strigoi clan of bloodsuckers, who want to chew up the school). And it knows that friendship -- not romance -- is a 17-year-old girl's true obsession. Best friendship can be all-consuming, even dangerous. It can explode. But after the debris settles, it'll still rank first. -- Amy Nicholson

16. Thirst (2009)
Finally, there's a vampire movie worthy of the title The Hunger -- even if it arrives under the more potable name Thirst. Carnal appetite, not a parched palate, is the accelerant that fuels this perverse, prankish, and merrily anti-clerical exercise in bloodletting from Park Chan-wook, the South Korean director whose films function like the moral-retribution mechanisms in the Saw movies -- traps with no way out but a permanently scarring exit. ¶ Vampirism would seem an unusually...genteel diversion for Park, best known for the "Vengeance Trilogy," which reached its apex with the Jacobean cruelties of 2003's devious Oldboy. Starting with 2002's byzantine kidnapping-gone-awry saga Sympathy for Mr. Vengeance, the former film critic and onetime philosophy student has made his subject (and method) the self-destroying machinery of violence. Once somebody throws a switch, the unstoppable gears of his plots mangle the guiltless and the guilty alike. -- Jim Ridley 15. Blade II (2002)
Taken in some twelve years after its release, Village Voice film editor Alan Scherstuhl writes that this Wesley Snipes vehicle is a "splatter marvel," but our 2002 review by Mark Holcomb characterizes it differently: "Returning to pulp territory after The Devil's Backbone, Mexican director Guillermo del Toro cribs from his earlier work in an attempt to breathe life in Blade II, a sequel to the 1998 Marvel Comics-inspired potboiler. The results rely more on Backbone's gothic pulchritude and Mimic's patent silliness than the whip-smart revisionism of Cronos, and whereas that 1992 film slyly steered the vampire genre into new terrain, the appallingly violent Blade II only wrestles it to the ground and sits on its head." 14. The Monster Squad (1987)
From our 1987 review: "Kids. Why did it have to be kids? I can take a lot, but I can't bear any more E.T./Goonies/Stand By Me summer movies -- like The Monster Squad, which pits a band of kids against an alliance of our favorite monsters. The kids are members of a treehouse monster club (except Phoebe, the requisite five-year-old); the monsters are trying to take over the world; you can guess who wins. Cute, precocious children make my blood run cold. ¶ The Monster Squad had the potential to be a good Hardy Boys Meet Frankenstein spoof. Not since the '50s have Dracula, Frankenstein, Wolfman, Gill-Man, and the Mummy been seen in the same place. One would hope to see fireworks from such a crew, but all we get are fizzles. Dracula is a wimp, Frankenstein has a crush on Phoebe, Wolfman is a furball, Gill-Man gets blown away by one little bullet, and Mummy dearest is an unraveled dolt." -- Melanie Pitts

13. Shadow of the Vampire (2000)
Premised on the notion that F.W. Murnau's silent horror classic Nosferatu was actually a documentary, Shadow of the Vampire manages to turn a highly dubious concept into a subtle and deliciously mordant comedy. ¶ The movie, directed by E. Elias Merhige from Steven Katz's script, joins Jim Shepard's 1998 novel, Nosferatu, as the second recent fiction to feature the German filmmaker as a tormented protagonist. But, unlike Shepard, Katz has only a casual interest in the historical Murnau. His protagonist has been reinvented for the movie as an overbearing Herr Doktor and heterosexual of the s persuasion. Of course, this, as well as numerous other liberties, anachronisms, and historical inaccuracies (Sergei Eisenstein invoked as a "master" of the medium three years before he made his first film), is minor compared to the movie's insistence that Max Schreck, the Reinhardt actor who played the indelibly feral Count Orlock, was actually a centuries-old Carpathian vampire typecast by a filmmaker driven to go beyond "artifice." -- J. Hoberman

12. Buffy the Vampire Slayer (1992)
From our 1992 review: "Somewhere between heaven and hell lies Buffy the Vampire Slayer. Fran Rubel Kuzui's campy little vampire treat isn't quite the "bogus corn" the title implies, but it's no Heathers either. Unlike that other SoCal dark ride, Buffy won't redefine the cynical teen comedy subgenre, even with Paul Reubens's hilarious role as a blood-sucker on a "bad hair day" or Donald Sutherland as the deadpan slayer trainer. But someone had to follow Catwoman and Sharon Stone, and Buffy, played by Kristy Swanson, got the job. Cheerleader turned dewy feminist avenger, Buffy's secret weapon against the undead is her PMS. Of course, she dreamed a different future -- as Christian Slater's sweetheart and a buyer. You know, like, 'Buyer. Buying. To buy?' to quote our heroine. But once convinced of her birthright as the latest in a long line of stake wielders, she pursues the Big One -- I mean vampire pooh-bah Rutger Hauer -- with a woman's pragmatism." -- Marpeesa Dawn Outlaw