See also: The 25 Worst People of 2012
Scroll down to view images

Ron Nielson wanted to do something extra scary for the kids on Halloween. He decided it would be totally spooky - not to mention hilarious - to burn a cross at his Palm Bay, Florida home.

Yet Nielson's uproarious "prank" -- his words -- went awry when he doused the cross with gas and accidentally set himself aflame, destroying his comedic timing. Medics airlifted him to an Orlando hospital, where he was treated for second-degree burns over half of his body, and doctors struggled to get the punch line.

The 50-year-old is expected to try something more tasteful next year, like hanging an innocent sharecropper from a light pole.

Bill Wisth is 6-foot-6 and weighs 350 pounds. He also really likes fish. These salient facts made him a regular at the all-you-can-eat fish fry at Chuck's Place, a family restaurant in Thiensville, Wisconsin.

But his devotion to Chuck's turned tragic one evening last spring. Wisth had already pounded twenty pieces of deep-fried goodness, yet still hankered for more. A waitress told him they'd run out. She offered to substitute a more expensive fish, but Wisth was rightfully outraged. The restaurant advertised all-you-can-eat, and he could still eat! He left in a huff, refusing to pay his bill.

Vengeance was his when he began picketing Chuck's with a sign reading "False advertising." Wisth was soon hailed as the Nelson Mandela of Thiensville. If his fight proved in vain, Golden Corral might restrict customers to 17 helpings of cole slaw. The implications were grave.

Yet Wisth's soaring star took a downward trajectory after the media interviewed a waitress. It turns out that Chuck's owner let Wisth run a tab when he couldn't pay for his meals. Worse, on the night in question, he was caught sneaking fish to his dining companion who hadn't ordered the special, a breach of all-you-can-eat etiquette so egregious it was like hitting on your aunt at the after-party for grandma's funeral.

Wisth was exposed as a mooch and an ingrate. Thiensville soon shifted its allegiance to a more deserving hero: The guy trying to remove the traffic camera on Maple Street.

The first sign that Michael Cook might not be suited for the St. Clair County, Illinois Circuit Court came last spring. He and fellow judge Joseph Christ were vacationing at the Cook family hunting lodge north of St. Louis when police were summoned.

They arrived to find Christ, a father of six, dead in a bathroom. It seems he failed to read the fine print on a sizeable package of cocaine, which warned that excessive use may piss off your heart, causing it to launch a work stoppage.

Having a dead judge in your bathroom tends to arouse the curiosity of the feds, who started investigating. But that didn't temper Cook's own fondness for powdered happiness. He was later arrested on heroin and gun charges after leaving the home of accused drug trafficker Sean McGilvery. (Cook had dismissed a case against McGilvery two years earlier. No word on whether this entitled him to a house discount.)

The judge resigned and was whisked to treatment in Minnesota. He's pleaded guilty in exchange for 18 months in prison.

Ernesto Yanez was a cop in Port Isabel, Texas before resigning to pursue a more lucrative profession: burglary. But the former lawman took some unusual lumps during his rookie season.

There was one small problem with this diversionary tactic: Manzanares didn't appreciate being ratted out, especially since he was Yanez's accomplice. So he in turn ratted out Yanez, allowing police to solve the burglary without lifting a doughnut. Yanez's burglary business is now for sale, though it has yet to find an interested buyer.

Allyssa Pack was spending a delightful afternoon at Twin Hills Park in Crestview, Florida with a young child and an unidentified man, enjoying the natural splendor. On this day, however, said nature included a trio of geese. They kept following Pack around, perhaps trying to mooch some bread crumbs because they hadn't taken personal responsibility and gotten jobs.

Pack thought it a teachable moment. She taunted the geese by saying, "I'll beat you so hard you won't even know it." Her friend filmed the scene on his cell phone.

As you might expect from unemployed water fowl, the geese didn't speak English. So Pack resorted to the international language of kicking them in the head as the young child laughed in the background.

"Did you get me kicking?" she asked her camera man, dancing before her adversaries like Manny Pacquiao. "I have now kicked all three of these geese in the face."

She knew her performance would make a wonderful educational video for the National Forest Service or the Ted Cruz presidential campaign. So it was loaded to Facebook.

But instead of celebrating her tough love, viewers began ratting Pack out to the cops. She was charged with animal cruelty and rocking a Macaulay Culkin hairdo in public. 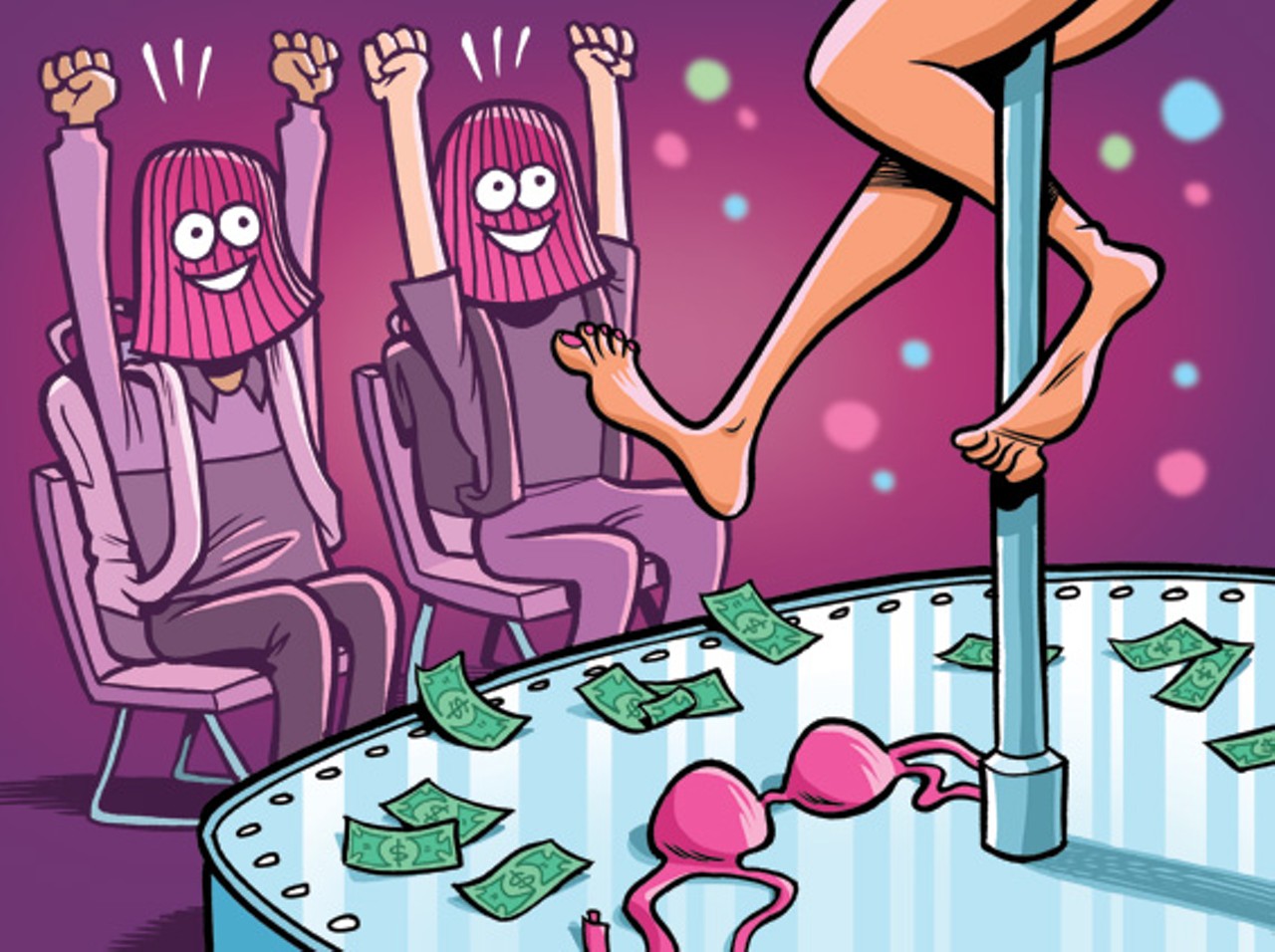 Today's lesson, boy and girls: Stay in school, even if you're only pursuing a community college degree in kidnapping.

One evening, a man was standing outside his Los Angeles home when the two gangbangers decided he'd make a fine if unwilling chauffer. They forced him to drive them on a few errands before reaching their final destination, Bare Elegance, a strip joint favorably reviewed by criminals on Yelp.

Our heroes let their chauffer go. He naturally called police. But since Ortiz and Maldonado failed to bone up on the getaway section of their kidnapping studies, they were still at the strip joint when the cops arrived.

The pair was arrested for kidnapping, robbery, and setting a poor example for America's youth.

It was the last day of school. Fourth grade teacher Maria Caya was slated to take her young charges to a Janesville, Wisconsin bowling alley to celebrate. So she prudently began drinking at 6 a.m. to get a jump on the festivities. Good teachers are always prepared.

Though eight other school employees attended the field trip, no one noticed that the 50-year-old educator had slightly overshot her intake capacity. Until she passed out at the bowling alley. With a blood-alcohol level of 0.27. Enough to fuel a Viking ship for three months.

Caya was accused of violating district policy on holding your liquor during field trips. She was paid $18,000 in exchange for her resignation.

The officers patiently explained that pleasuring one's self in front of kids is generally frowned upon in Arizona. It took some doing, but Dean finally got the gist of their argument, conceding that he could have chosen a better locale to polish his manly sword.

"I guess I could have gone underneath the bridge overhang," he sheepishly admitted. He was charged with indecent exposure and possession of narcotics.

Delray Beach, Florida chiropractor Matthew Supran was watching his son's hockey game when a 14-year-old opposing player elbowed his boy in the face. A ref ruled the hit non-malicious, giving the kid a five-minute penalty under hockey's sentencing guidelines of assault.

Yet Supran had neglected to teach his son the game's prescribed response for an elbow to the face: a succession of retaliatory punches. Clearly he sucked as a Hockey Dad.

So the 230-pound Supran ran onto the ice, punched the teen offender in the face, then grabbed his helmet and slammed his head into the boards in a naked attempt to compensate for bad parenting. He was arrested on charges of child abuse.