The best aspect of St. Louis' music scene is its refusal to be neatly summarized. A city this rich in musical diversity will never be defined by one sound but by the reverberations of many.

And by many, we mean very many. Even Homespun, our weekly column that reviews local music, can't catch everything. Records by Pokey LaFarge, Foxing and the Bottle Rockets found national (and sometimes international) audiences; solid LPs by acts like CaveofswordS and Beth Bombara showed refinement and consistency.

But of the fifty-odd local releases reviewed this year, these were the ten that dug in deepest — from promising debuts to welcome returns and plenty of solid, restless creativity in between.

American Wrestlers, American Wrestlers
When Gary McClure, a 34-year-old native of Scotland, moved to St. Louis, he began making lo-fi home recordings with little more than a cheap guitar and a drum-machine app on his iPhone. He had formerly played in the London-based Working for a Nuclear Free City and wanted to make a record purely on his own.

"I thought, 'Well, if I could write what I wanted to, what would it be?'" says McClure. "I think that's what I was writing when I wrote this new record. When I was twelve I heard bands like Smashing Pumpkins, Nirvana, Soundgarden, Pearl Jam and that was my thing. That's how I learned to write songs — from those guys, from obsessing over those records."

While the hallmarks of grunge are not the dominant strain on the American Wrestlers debut, the guitar-driven, direct-to-tape energy shows equal parts tunefulness and DIY invention. Lead single "I Can Do No Wrong" rides on fuzzy bass and a metronomic 4/4 beat, but McClure's multi-tracked guitars whip and weave around his sweet, expressive vocals. If the recordings are slightly rough around the edges, the pop hooks and smart dynamics are irrepressible.

Arshad Goods, Black Sunday
Arshad Goods' refusal to be put in a box goes beyond his rhymes; the rich sonics and stuttering beats on the debut album from the University City native range from hard-hitting trap music to funky Soulquarian vibes. One of Goods' strengths is his willingness not only to bounce around styles and subgenres of hip-hop with comfort, but to subvert expectations and change directions within the track. The Quiet Storm jam "Mary Go Round" is as close as the album gets to a slow grind (aided in no small part by Aloha Mi'Sho's breathy vocals), but Goods drops a spitfire verse where most emcees would keep it smooth. That he ends the track with an emasculating voicemail message from his paramour is further proof that these songs thrive on conflict and tension, and they never play it straight. 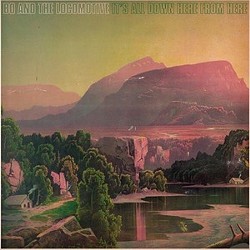 Bo & the Locomotive's It's All Down Here from Here

Bo & the Locomotive, It's All Down Here from Here
As if to bless Bo & the Locomotive's new record with an opening prayer, "There Is a Time" proves that a band accustomed to guitar-addled, nervy rock songs can be spare and spacious with little more than piano and over-driven organ. After that hazy, nearly lo-fi opener, "Never Afraid" kicks the record into a different sonic space.

Part of the beauty of Bo & the Locomotive has always been in the group's synergy — namely, that four lovable knuckleheads who were decent but hardly mind-blowing instrumentalists could make such sturdy, robust rock songs. An insistent analog synth line is perhaps the biggest tell of producer David Beeman's influence on the record, reminiscent of his work with Née and Old Lights, while Bo Bulawsky's oft-laconic vocals and slow-burn songwriting feel purely kinetic.

Normally, there's little flash or dynamic range in Bo & the Locomotive's sound — the songs sidle into a mid-range space that would be blasé were the band not so locked-in or the singer less committed to telling his sideways narratives. Bulawsky's delivery is charming and detached alongside the pleasing grain of his voice, but the tools he deploys here — the knife-sharp movements of "In the Water" or the surprising tenderness of the domestically inclined "Cook" — suggest depth instead of distance.

The Educated Guess, The Educated Guess
If bandleader Charlie Brumley's earlier songs channeled Springsteen's penchant for symphonic, cinematic scope through the confines of a four-piece rock band, this self-titled LP takes the Boss' source materials and coats the tracks in technicolor brilliance. Brumley has always counted Phil Spector and Brian Wilson as inspirations, but with an army behind him — 42 musicians, including string and brass sections, as well as a chorus, are listed in the liner notes — the Educated Guess has now constructed its own Wall of Sound.

Along with those California pop signifiers, traces of Burt Bacharach, Motown and Philly Soul sneak through, and the girl-group harmonies of the Honeys serve as trebley angels on the shoulder of Brumley's plaintive, somewhat limited tenor voice. From a sheer compositional standpoint, there's been nothing to parallel the Educated Guess in the local pop and rock communities; these songs are precisely arranged and played with gusto and soul, and the scope of this self-titled album is both skillfully assured and musically ambitious.