The Chocolate Pig Has Great Desserts, But Could Use More Innovation 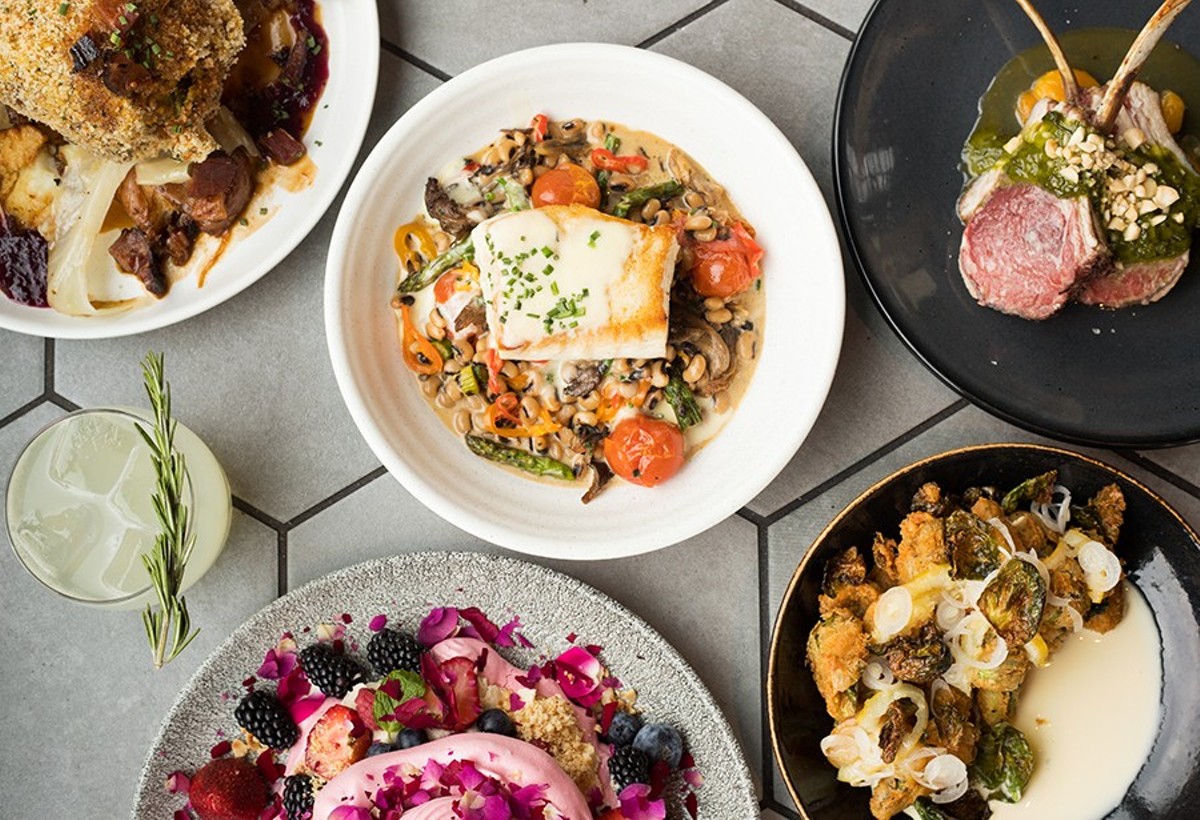 In the office buildings above the Chocolate Pig, entrepreneurs, startup founders and business leaders buzz about, bringing to life the innovations that are helping to transform St. Louis into a modern economy. The surrounding area is, after all, called the Cortex Innovation District, so the focus is on pushing our expectations of how things can be.

It's fitting that something like the "Peanut Butter Bomb" is being served on the ground floor of Cortex's Innovation Hall. Not merely a dessert, the dish is a total sensory experience unlike any other in town. A dark chocolate sphere the size of a softball is surrounded by peanut butter cookie crumbles and liquid-nitrogen-treated berries, a process that freeze-dries the berries so that they dissolve on the tongue like a whole-fruit version of Dippin' Dots. And that's only part of the show; the drama comes courtesy of a warm berry sauce that is slowly poured over the chocolate ball, melting away the shell to reveal a cool peanut butter mousse with more cookie crumbles and nitrogen berries. Molten and frozen, silken and crispy, the "Peanut Butter Bomb" forces you to hold several conflicting phenomena in your mind at once, an experience that is utterly unique and positively thrilling.

You'd expect such pastry prowess from the Chocolate Pig, the latest restaurant from the 23 City Blocks Hospitality Group. Its sister company, after all, is the revered local chocolatier Bissinger's. However, sweets are only part of the story here.

Seeking a restaurant that would fit its ethos, Cortex had issued a request for proposals, and asked 23 City Blocks to consider responding. The company had little time to put together a proposal, but that proved to be no problem. After 23 City Blocks closed its Central West End eatery Handcrafted by Bissinger's, managing partner Kate Turner had been tossing around the idea of opening another restaurant. She even had the name on standby. As she and her team sketched out what "the Chocolate Pig" meant to them, they homed in on an elevated comfort-food concept that would revolve around nose-to-tail cooking while also honoring its relationship with its chocolate-focused sister company.

MABEL SUEN
There is both traditional dining and a pastry bar where people can watch desserts being made.

After Cortex awarded 23 City Blocks the restaurant space, its team began searching for the people to bring their ideas to life. On the savory side, they found Patrick Russell, who had demonstrated his passion for farm-to-table cooking at Field & Main in Marshall, Virginia. For the sweets, they called upon Tyler Davis, who had made a name for himself as the pastry chef at Element and a contestant on the Food Network's Halloween Baking Championship.

They also enlisted Brett Clark of the local interior design firm Savvy Surrounding Style to create a space that felt flowing and round. To that end, there are no 90-degree angles in the restaurant; walls are curved, multi-dimensional and appear almost fluid, like ribbons of blonde wood. In the dining room, that light-colored wood forms the tables and chairs; dark taupe leather covers the banquettes. The separate bar and lounge area, filled with high-top tables, has a similar neutral-toned aesthetic. A pastry bar allows diners to belly up to the pastry show kitchen and watch as the magic is made.

Chef Russell's savory selections have their moments of magic as well. The restaurant's runaway hit, the chicken-fried Brussels sprouts, are positively addictive thanks to their thick coating of peppery breading. The deep-fried veggies sit atop a layer of creamy buttermilk dressing. They are accented with pickled onions and confit lemons, which both temper the salt and spice of the breading, adding intriguing complexity to what is otherwise a plate of pure comfort.

Russell elevates the humble deviled egg by adding pieces of smoked chicken, tangy St. Louis-style barbecue sauce and piquant sweet peppers to the usual mayo-mustard filling. The additions give the dish both savory depth and brightness, while crispy chicken skins provide texture — something all too often lacking in this picnic staple.

After such rich appetizers, the beet ceviche is a welcome plate of refreshment. The pink-colored cubes, identical in appearance to raw tuna, are dressed in lime and garlic, infusing every bite with brightness. Slivers of pickled jalapeño tingle the tongue with heat, waking the palate. The dish provides welcome balance to the otherwise decadent first courses.

The most successful entree is the pork chop, a massive hunk of meat that is flawlessly cooked, its flesh the color of pink rose petals. The pork is lightly glazed in miso and mustard, which enhance the meat without covering it up. And though pairing pork with candied sweet potatoes and braised collard greens isn't exactly groundbreaking, the satisfying sweetness of both show why it's such a classic combination of flavors.

For all of its successes, the savory side of the menu has a few areas that need improvement. The seared diver scallops, for instance, were cooked well and thoughtfully served alongside butternut squash puree and a pumpkin relish that brought out the shellfish's natural sweetness. I just wished for a larger portion. A roasted half-chicken, however, was under-seasoned and overcooked, and the accompanying jus lie (a thickened pan sauce) was salty. You'd think one would correct for the other, but they failed to integrate into a cohesive seasoning level.

My least favorite dish, however, was the "Bacon Flight," a trio of beef, lamb and pork bacon, each served with various accoutrements. Each version was chewy, bordering on jerky, but the garnishes were an even bigger problem. The beef bacon came with sweet soy sauce and was garnished with a "quick" kimchi that delivered no heat and barely registered. The pork bacon was drizzled with a sherry and coffee gastrique, though again, the flavors got lost. As for the olive, tomato and caper tapenade accompanying the lamb, I would have preferred a lackluster impact to the salty, almost puttanesca-like flavor. It exacerbated the gaminess of the concentrated lamb flavor in a way that was unpleasant. In the middle of all this, an herbed white chocolate sauce pooled in the center of the plate. Perhaps it would have worked in the absence of other condiments — in the same way that some get enjoyment from putting bacon on doughnuts — but when presented in concert with everything else, it was too much.

The "Milk and Cereal" dessert proved a much better marriage of sweet and savory. Luxurious dulce de leche cream is surrounded by caramelized pork rinds that mimic the crunch you get from cereal. Two dollops of malted milk ice cream bob in the dulce de leche sauce, and, as an added touch of whimsy, caramelized bananas complete the plate — a nod to adding sliced bananas to your morning bowl of cereal.

Another reimagining of the familiar is the restaurant's version of a candy bar. Here, maple bacon ice cream is coated in dark chocolate that has been segmented to look like a thick chocolate bar. When you break open the exterior shell, the ice cream flows out, mingling with the crumble of hazelnuts and toffee and dollops of caramel sauce. It's a show stopper.

I found myself consistently dazzled by every single thing that came out of that pastry kitchen, not only because these offerings tasted nice, but because they were creative, unexpected and unlike most of what's available on dessert menus at other local restaurants. Enjoying these sweet treats in an equally unique setting felt natural and, more to the point, in keeping with the spirit of Cortex.

MABEL SUEN
The restaurant is located in the Cortex district.

However, there was something off about the overall dining experience. Sure, there were a few missteps on the savory side of the menu, but the food was, for the most part, good — and on some occasions, really good. The problem was not in the execution; it was that the savory concept did not seem to fit with the overall ethos of innovation that is supposedly the restaurant's driving force. There was nothing on the menu that I haven't been seeing at every other area gastropub/farm-to-table/nose-to-tail/seasonal American restaurant the last few years. The menu seemed to belong more to a circa-2013 comfort food/whiskey bar outfitted with reclaimed wood and Edison lightbulbs than in a community and restaurant aiming for the future. The name even says as much, evoking the handful of porcine-named places that have sprung up around town over the years.

Chef Russell knows how to cook, so I have hope that, once the concept matures, the Chocolate Pig will find its voice under his capable hands. After all, in Cortex, potential inspiration is everywhere.