The Drawing Board Creates Masterpieces of Dive-Bar Food 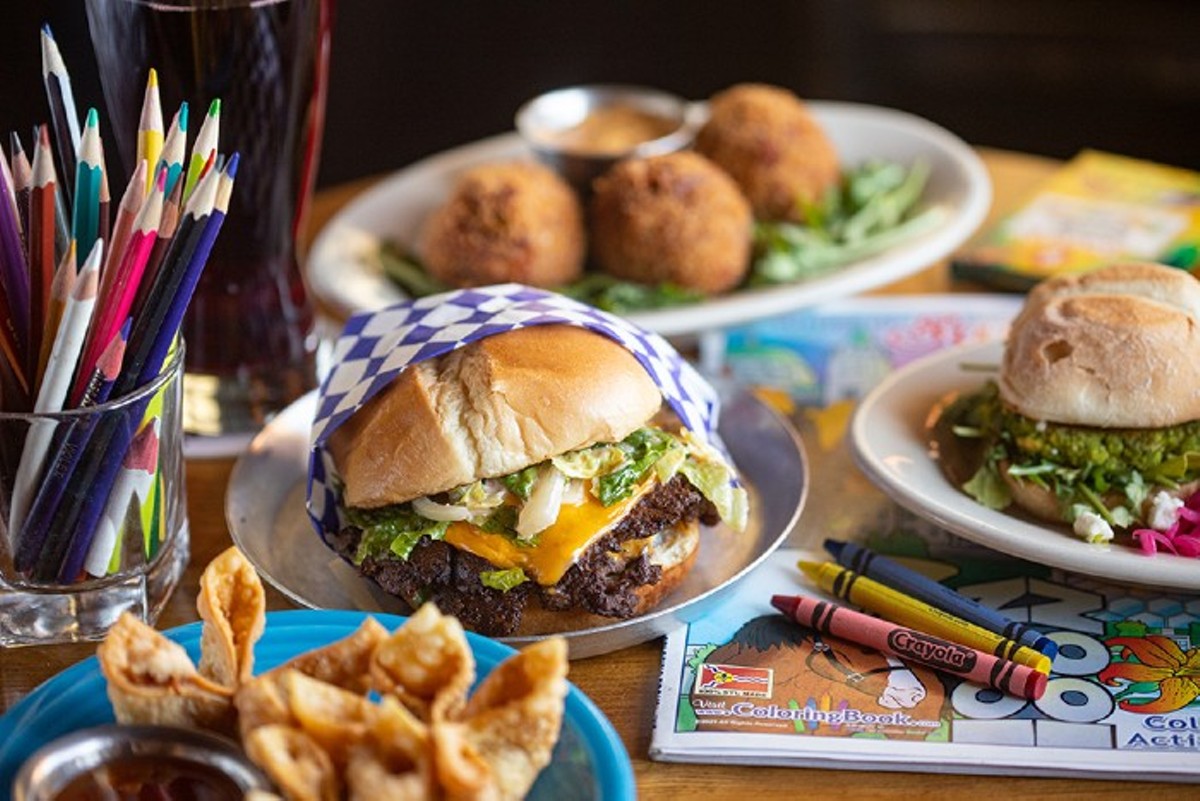 When you first step inside the Drawing Board, there is nothing to make you think you are anywhere but a typical south St. Louis dive. The old, dark wood bar that looks exactly the same as when long-gone brewery staffers and metalworkers bellied up mid shift for a draught Falstaff, the low tin ceiling, painted over to cover decades of unfiltered cigarette smoke stain, and the pool table, illuminated by a vintage beige-and-orange Tiffany-style lamp, paint a picture of the quintessential southside watering hole.

That initial impression begins to fade, however, as you take a closer look. Though Stag and PBR are on offer, the bar is stocked with craft beers, good whiskey, wine and adult seltzers. Chalkboards dot the space, beckoning guests to give in to their inner artist as a Bob Ross rerun plays on the corner television. Refinished wood floors give the space polish; a painting of Jimi Hendrix and a massive mural of the St. Louis skyline give it sparkle. Then there's the crab Rangoon, a dish you order to satisfy your need for deep-fried bar food. You find yourself shocked when its contents consist of actual lump crabmeat. If you needed any further convincing that this was a different sort of dive, that Rangoon does the trick.

Those unexpected, more elevated touches are exactly what Paul and Matt Wamser and Alexa Camp had in mind when they took over the space this past January. Prior to that, the corner building that sits off of Chippewa Street near Gravois Road operated as Ryder's Tavern, a south-city gathering spot known for its welcoming atmosphere but, outside of a regular burger special, not necessarily its culinary offerings.

When Ryder's succumbed to pandemic-related challenges in May 2020, the Wamser brothers saw it as an opportunity to finally open the bar they'd often talked about running. The move made sense; Paul owned the building and was in need of either a tenant or income from the space, and Matt had extensive experience in the food and beverage industry. They loved the idea of Ryder's neighborhood-bar model, but they wanted to put their own spin on it through thoughtful details, such as music, art and food.

For that last component, Matt reached out to his longtime friend and former colleague, Alexa Camp. While working together at Urban Chestnut's Midtown location, the two became great friends and developed a mutual respect for one another's professional abilities. When it came time to figure out the menu for the Drawing Board, Matt knew there was no one he would rather have take charge than Camp. He and Paul brought her in last December and gave her free rein to work out her vision.

For Camp, who has worked everywhere from the Corner Pub and Grill to the first iteration of Quincy Street Bistro, approachability and comfort were the most important factors she considered when developing the Drawing Board's menu. As she will often note, the offerings are not all that different from what you would see at any other bar or chain restaurant, but they have special touches and an eye to quality that make them special. Just as the crab Rangoon is homemade and filled with real crabmeat, other dishes are equally elevated from what you think you would get at a southside bar. Jambalaya balls, for instance, are a delightful play on arancini. The golden-fried, mandarin-orange-sized fritters have a crunchy exterior; when pierced with a fork, they reveal steaming, flawlessly cooked jasmine rice flecked with chicken, andouille, peppers and onions that evoke all of the flavors of the classic Cajun dish. Though excellent on its own, a side of remoulade sauce adds a zesty punch to this outstanding snack.

Camp's knack for NOLA-style cooking is also evident in the red beans and rice, a warm, satisfying side dish enriched with smoked pork for a rich, savory flavor that's like chili with a Louisiana inflection. If you have a craving for that quintessential cold-weather dish, the red beans and rice will satisfy it, but if you are there on one of the days Camp makes her chicken chili, you'll want to seize the moment. She uses smoked chicken, which gives the chili depth you don't often find in a poultry-based version. There's no better dish to enjoy while sitting around the fire pit on the Drawing Board's dog-friendly back patio.

The Drawing Board offers a handful of sandwiches, including an excellent smash burger, which is a holdover from the Ryder's Tavern days (chef Tony Collida, currently chef and owner of Grand Pied, is the one who gets credit for this creation). The patty's edges are perfectly lacy, just as you'd expect of the style; molten American cheese seeps into every crack in the patty, creating a decadent wonder that is balanced out with a slaw of shredded romaine, onion, dill pickles and curried bread-and-butter pickles tossed in Thousand Island dressing. Called "Medart style" after a long-shuttered burger restaurant of the same name, the topping is billed as optional, though there really isn't any question whether you should add it.

Camp takes every opportunity to showcase her meat-smoking abilities, of which we are all beneficiaries. A traditional Philly cheesesteak features thinly shaved smoked strip loin smothered in bell peppers, onions and a velvety housemade cheese whiz, all tucked into a fluffy hoagie roll. The earthiness of the smoke permeates the entire sandwich, making it more complex than the usual Philly. Even the grilled cheese is special. Instead of the standard orange cheddar or American, Camp uses white cheddar and herbed goat cheese to give it a pungent punch. It pairs beautifully with an optional filling of herbed wild mushrooms, which turns this into the sort of grilled cheese you'd expect to find on the lunch menu at an upscale bistro rather than a working-class tavern.

If Camp will become known for one thing, however, it's the Gooey Babies, her stunning, individually portioned take on gooey butter cake. The muffin-shaped treats are fluffy, cake-like and notably less cloying than the traditional version of the St. Louis staple; one could even call them a gooey butter souffle that even your gooey-butter-averse out-of-town friends will enjoy. You wouldn't expect to find perhaps the city's best version of its official dessert at a south St. Louis corner bar, just as you'd be surprised to see real crab or a thrilling riff on arancini on its menu. That the Wamser brothers and Camp have figured out how to perfectly thread that needle without losing the bar's essential character is what makes the Drawing Board such a special place.