The Fault in His Stars: Nolan's Interstellar may be grand, but it doesn't connect 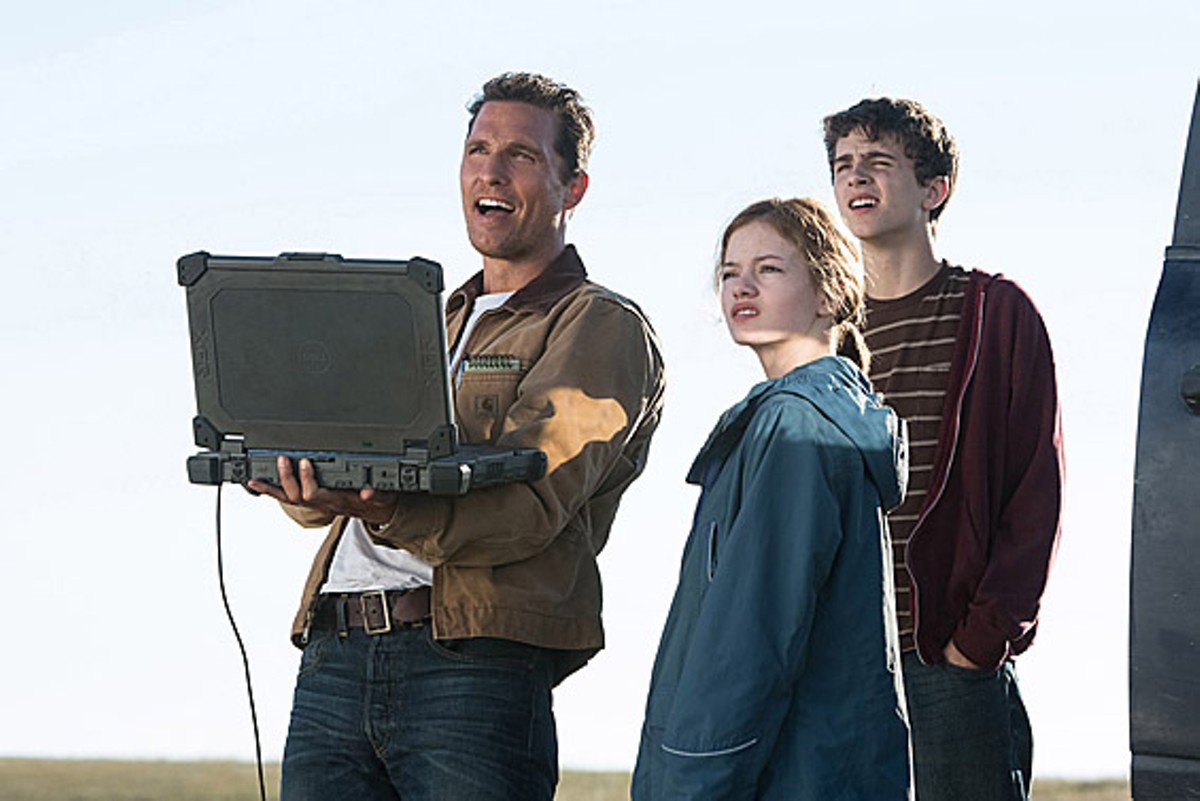 The Fault in His Stars: Nolan's Interstellar may be grand, but it doesn't connect

There's so much space in Christopher Nolan's nearly three-hour intergalactic extravaganza Interstellar that there's almost no room for people. This is a gigantosaurus movie entertainment, set partly in outer space and partly in a futuristic dustbowl America where humans are in danger of dying out, and Nolan — who cowrote the script with his brother, Jonathan — has front-loaded it with big themes and even bigger visuals. Interstellar is supposedly all about what it means to be human, but it's supersized in case we really are so out of touch that we need to have everything blown up IMAX-big. "We used to look up at the sky and wonder at our place in the stars," says Matthew McConaughey's farmer-astronaut-dreamer in one of his many, many proclamations about life, family and the cosmos. "Now we just look down and worry about our place in the dirt." But even the dirt in Interstellar looks spectacularly art-directed.

Nolan opens the movie with faux-documentary commentary from old folks settin' a spell and reflecting on their youth in a dying, dust-choked world. One woman — recognizable as Ellen Burstyn — says that her father was a farmer, "like everybody else back then." In the world of this woman's childhood, there's a surfeit of engineers and not enough people to grow food. Which means that men of science have been forced into the more menial (though not less important) job of coaxing life out of dry dirt.

McConaughey's Cooper is one of these guys, though he can never disavow his science-geek roots. One of his two kids (played by Timothée Chalamet as a youngster, but he'll grow up to be Casey Affleck) isn't doing well in school; he'll be placed as a farmer, instead of being one of the lucky few to advance to engineering school. But Cooper's daughter, twelve-year-old Murph (Mackenzie Foy, who will eventually morph into a petulant, one-note Jessica Chastain), soaks up her dad's sciencey musings.

Cooper will end up leaving Murph, and Earth: A seemingly random — but not really — chain of events leads him to a secret space station where an old professor of his, Michael Caine's Dr. Brand, is planning a mission. Though NASA was dismantled long ago — space travel for exploration's sake was long ago deemed frivolous by the government — Dr. Brand and his team, chief among them his daughter, Amelia (Anne Hathaway), believe that the only hope for mankind lies in the stars. Luckily, Brand has located a wormhole leading to another galaxy, which may contain at least one inhabitable planet. And so Cooper, along with Amelia and two other crew members (played by Wes Bentley and David Gyasi), head into space in search of dust-free air and unspoiled water.

Cooper and his colleagues encounter frozen worlds and watery ones, and the dangers they face are both existential and specific. The universe Nolan has invented for them, drawn from both science (the movie is partly inspired by the work of theoretical physicist Kip Thorne) and movie dreams (paging Stanley Kubrick), is vast, awe-inspiring and terrifying. In an early scene, the crew chatter and pick at one another inside the cabin, but thanks to crackerjack cutting, camerawork and sound design, we can float on the outside, where it's deafeningly quiet — the planes of the ship hang delicately in the breach of nothingness. This vessel is so gorgeously alone; for a moment, Nolan captures the idea of space as a source of both wonder and despair.

But if Nolan is so godlike, you'd think he'd be better with actors. They don't stand a shooting star's chance in Interstellar. (Hans Zimmer's droney, churchy organ score, the worst kind of Zimmermusik, doesn't help.) Hathaway's big moment — her only moment, really — is a quavery speech about true love; she emotes like gangbusters as her eyes pool with Fantine-like tears. In the past few years, McConaughey has reinvented himself into a marvel of spark and fire and subtlety. What he does here isn't acting; it's superacting. There's no other way to stand up to the manmade-monument quality of this material. In what should be McConaughey's most moving scene — he faces the reality that his children have aged by 23 years, while he's only a few hours older — Nolan trains the camera on the actor's face so we can take the measure of his free-falling tears. We can see McConaughey working the strings. He's like the Magic Mike version of male vulnerability, turning it all on for show.

Nolan does have a seemingly inexhaustible store of extravagant ideas. As in Inception, with that dream vision of Paris folding in on itself — a wonderful, inventive image that stands out against the rest of that movie's bland trickery — he comes up with one extraordinary visual idea in Interstellar: Cooper finds himself in a corrugated passageway whose walls appear to be made of strands of light — or are they books on a shelf? The metaphor is lovely, a suggestion that books — all paper, glue, ink, and string, so old-fashioned and so touchingly fragile — still hold incomparable power. Their rays reach out to us like sunbeams.

In all of Nolan's films, human connection is such a noble idea that it's beyond the grasp of flesh-and-blood people. Nothing in Interstellar is ever ragged or raw or dirty (though there is, admittedly, a lot of dust). Characters gabble on about taking risks, about needing one another, but they never leap toward anything so dangerous as intimacy. "Rage against the dying of the light!" Nolan urges us, and he himself burns through a great deal of electricity and gas to keep his spectacle glowing for as long as possible. He has so much invested in showing us. He just doesn't want to get close enough to touch us. Space suits him just fine. 