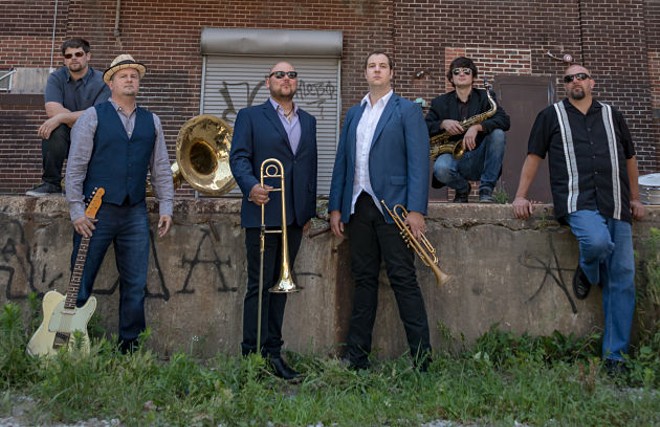 When the Funky Butt Brass Band formed ten years ago, the group was as interested in preserving tradition as it was perverting it. In channeling New Orleans' storied second-line brass bands, the horn-heavy group could summon the ghosts of the Crescent City while maintaining its own weird brand of mayhem — you're as likely to hear an Allen Toussaint cut as you are a Bee Gees medley at an FBBB show.

So it is in that spirit that Funky Butt has approached the Christmas season; the band has taken over Off Broadway for nine years running for memorable, irreverent and regularly sold-out holiday shows dubbed the Holiday Brasstravaganza. Those shows have now sprung two Christmas albums, and the band's newest release, A Funky Butt Family Christmas, recreates some of that magic by inviting some of its regular guest vocalists and instrumentalists along for the ride, including Brian Owens, Steve Ewing and Roland Johnson.

"We wanted the first holiday record [2011's Shiny Christmas Balls] to be a showcase for what the band could do musically and vocally. But we were having so much fun playing with these amazing guest artists at our holiday shows, we wanted to capture that in the studio," says guitarist and singer Tim Halpin. "So on A Funky Butt Family Christmas, we're essentially the backing band for some of St. Louis' finest artists, people we're lucky enough to call our musical family."

Trumpet player Adam Hucke notes that the band's first Christmas album, while musically dexterous, was a bit arch in its approach to the material — the title track "Shiny Christmas Balls" and its ripping, holiday-fried remake of Ozzy Osbourne's "Crazy Train" are a hoot, but not exactly designed for egg-nog toasts with Grandma. "I think our new Christmas album captures a sound of sincerity that many Christmas songs and albums lack," says Hucke.

In collecting these songs, FBBB and their guests have done a solid recreation of some of the better soul and R&B Christmas comps of yore. Owens, a gospel-trained singer whose national star continues to rise with the release of this year's Soul of Ferguson, shows his range on a percolating cover of "Rudolph the Red-Nosed Reindeer" done in the style of the Temptations' air-tight arrangement. Roland Johnson, a soul serenader whose 2016 album of originals Imagine This offered a new look at a longtime talent, takes on the Otis Redding-popularized "Merry Christmas Baby."

According to Halpin, the tracks on Family Christmas were forged over the last few years' worth of Christmas shows, and here the FBBB players serve as a crack backing band for the guest vocalists.

"These are all songs our guests have performed at one point or another at our shows," says Halpin. "Several people over the years have sung the Donny Hathaway tune 'This Christmas' with us, but we thought Steve Ewing was the guy to record it. And nobody nails the Darlene Love tune 'Christmas (Baby Please Come Home)' like Emily Wallace. She brought the house down with it last year, so it was a must to include when we went into the studio."

Along with some of the holiday hits come a few surprises; Dave Grelle contributes his rendition of Tchaikovsky's classic on his boogie-woogie-fied "The Nutrocker" that showcases the group's chops. The eight-track album closes with "Because It's Christmas," an original composition from a few years back that features a few of the guest vocalists offering a hopeful and heartfelt message.

As FBBB preps for this year's slew of Brasstravaganza shows (which have come to include a kids' matinee alongside the Friday and Saturday night sets), the band is bringing back some well-loved traditions: Founding members Matt Brinkmann (sousaphone) and Ben Reece (saxophone) will be back onstage alongside many of the vocalists from Family Christmas and guests including Bob Bennett (as a saxophone-wielding Santa Claus), the Urge's Jerry Jost on guitar and local fixture Typewriter Tim providing an invocation with a scene-setting Christmas story.

"The holiday shows seem to have become a kind of 'can't miss' event over the past eight years, which is a real thrill for us, and every year we see familiar faces and a whole bunch of new ones in the audience," says Halpin. "We try to bring back a mix of familiar guests who have been with us a while and include some new ones to keep things interesting."

"Every year we learn a few new songs and have a couple different guests," says Hucke. "Thankfully it's not too difficult to come up with new ideas to make it fun for us ... and of course there are certain traditions that the audience loves and probably expects us to keep as part of the show."