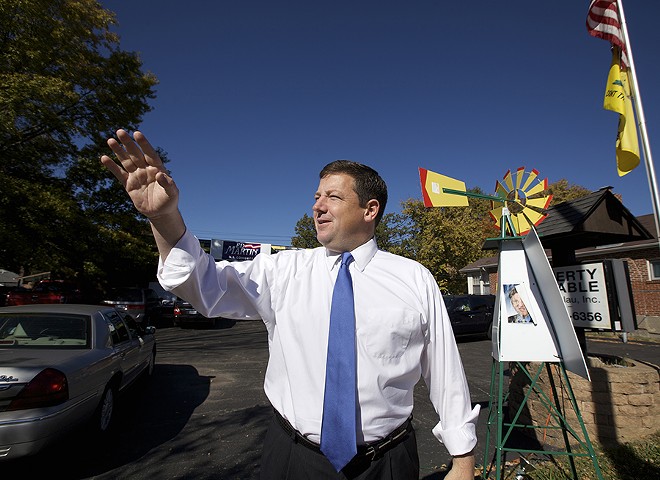 PHOTO BY JENNIFER SILVERBERG
Ed Martin continues to hold himself out as Schlafly's hand-chosen successor.
Martin maintained control of both Eagle Forum entities for four months after the vote to fire him, but within weeks of Schlafly's death, his allies finally went too far. And when a staffer blew the whistle, they found themselves in real trouble with the court.

Through her job at Eagle Forum, Elizabeth Miller had long had a ringside seat for the strife. She'd actually helped Martin send the email blasts targeting the board, at his directive.

But after September 26, according to an affidavit Miller would later file in court, she was under "constant pressure" to turn over passwords for the organization's mailing lists and email to Roger Schlafly. Doing so, he told her, would "prevent the plaintiffs in the lawsuit from obtaining any 'of our information.'"

"Roger told me that he and John Schlafly were willing to go to jail before providing any information in the lawsuit," Miller said in the affidavit.

At John Schlafly's directive, Miller reported, she had transferred ownership of eagleforum.org from the Eagle Forum to an entity controlled by the Schlafly brothers, Eagle Trust Fund. The website's listed contact was changed to John Schlafly. And then, at his demand, she did so for 59 other domain names owned by Eagle Forum.

It wasn't just the brazen transfer of assets during a supposed period of "status quo." Miller's testimony also suggested that Martin's allies had been dishonest about being unable to access the mailing lists, at a time they were under court order to produce them. She suggested they were right there on her computer.

Armed with Miller's affidavit, the board members filed an emergency motion. This time, they had the judge's ear.

The matter, Judge John B. Barberis Jr. wrote on October 20, was now "an emergency" posing "an immediate threat to the status quo."

He concluded, "The Court finds that Martin and John Schlafly have proven themselves ... to be unwilling and/or incapable of using their positions to serve the best interest of Eagle Forum and to cooperate with Plaintiffs in connection with the management and operation of Eagle Forum."

Judge Barberis ordered all Eagle Forum property — bank accounts, websites, email lists and more — to be turned over within 48 hours. And he decreed that neither Martin nor John Schlafly nor "those acting in active concert or participation with them" would be permitted to access Eagle Forum property without the board's written authorization. Martin, he wrote, was "hereby suspended from his office and all his duties as president of Eagle Forum ..."

It was a huge victory for the board members. For the first time since April, they, not Martin, were in control. And while they had to continue to set aside money for Martin's salary, it wasn't going into his bank account. The judge ruled that it be held in abeyance until the matter could be sorted out further.

But for all the directness of the judge's order, it wasn't over. Not yet.

The keys to the website were supposed to be turned over in 48 hours. But fourteen hours after the judge's ruling, visitors to the Eagle Forum website were instead redirected to a website controlled by at least one Schlafly brother — which featured a curious blog post blasting the judge.

"I do not know too much about Judge Barberis, except that he is the lowest rated judge in Illinois," the post read. "He is busy doing fundraisers for his campaign in an election next month to be a judge on a higher court."

The post then tried to reframe the ruling as anti-Trump.

"The judge ordered that all pro-Trump articles posted on www.eagleforum.org since April 10, 2016 be removed," it continued. "...I have never heard of any political advocacy organization being ordered not to express opinions on a web site. Not in the USA, anyway. I thought that the First Amendment prohibited that sort of thing."

The court order never once mentions Trump's name. Yes, Judge Barberis ordered that recent updates to the website be removed — but only to restore the status quo under the original restraining order. Any deletion of Trump-related content was incidental.

That didn't stop a right-wing website from running with the story.

"Even after her death conservative icon Phyllis Schlafly is still being attacked by the left, #NeverTrumpers and activist judges," the Gateway Pundit reported. "Illinois Judge John B. Barberis has ordered Eagle Forum (Schlafly's website) to remove all pro-Trump articles posted after April 10, 2016. Phyllis Schlafly was an early Donald Trump supporter. This week an activist Illinois judge ordered Eagle Forum to remove all pro-Trump articles after April 10, 2016. Unreal."

Judge Barberis' ruling was a huge setback for Martin and his backers, and it wasn't to be their last.

Just days before that ruling, Martin's loyalists had opened a third stage of attack — this one in federal court. In a lawsuit filed against the 501c4's board of directors, they argued that Schlafly's likeness did not belong to the Eagle Forum — that she had signed it over, as well as assets including the organization's mailing lists, to a trust. And that trust was controlled by Bruce and John Schlafly.

That case is still pending, but it got off to a rocky start for the Schlafly brothers. Last month, Judge John A. Ross declined to issue a restraining order or take other rapid action. The brothers, he said, had not presented evidence showing they were likely to prevail.

The women who found themselves locked in mortal combat with Martin are now regrouping. Their attorney, Erik Solverud of Spencer Fane, says they have still not gotten full access to the website or email list, despite the judge's order. A full month later, Martin was still appearing on Fox News as "president of Eagle Forum."

"This level of disregard is shocking but altogether not surprising," Solverud says. "Because Plaintiffs control the Eagle Forum Board, Mr. Martin's only strategy seems to be delaying and defying the orders of the Madison County Court. I have truly never seen anything like this." (Martin denies that and notes that he is trying to get Solverud's firm removed from the case.)

The board members are trying, at long last, to look to the future. Way back in April, they set up a presidential search committee, but were stymied by their lack of control of the organization's bank accounts. Now they again have the ability to spend, and they're eager to hire a new leader. "What we'd like to do is move on," says Eunie Smith.

And what of Ed Martin? For as hard as he's fought to keep control of Eagle Forum, today he insists it's just one piece of Schlafly's empire. Sure, it's the organization with the name recognition, but Schlafly was "a serial entrepreneur," he says, listing other entities she founded. He plans to continue her work with or without the Eagle Forum.

And it's not just her work, either.

On November 3, as the postscript to a message from Schlafly blasted out to an email list he still controls, Martin attached a coy note.

"Exciting news for after the election," Martin wrote. "Last week, Maj. Gen. Jack Singlaub, US Army (ret.) asked me to step up to lead America's Future, Inc. which is our nation's oldest conservative organization. I accepted and will be working with him to highlight our important work. Click on this link to find out more!"

Clicking the link reveals an organization with a long history, albeit one largely unknown to today's conservatives. The St. Louis non-profit boasts numerous radio programs and pamphlets. Its secretary, until this summer, was none other than Phyllis Schlafly.

But perhaps more important than its output is its balance sheet. America's Future Inc. has assets totaling $2.6 million, according to its most recent tax return – and annual expenses of just $59,000.

And its president, Jack Singlaub?