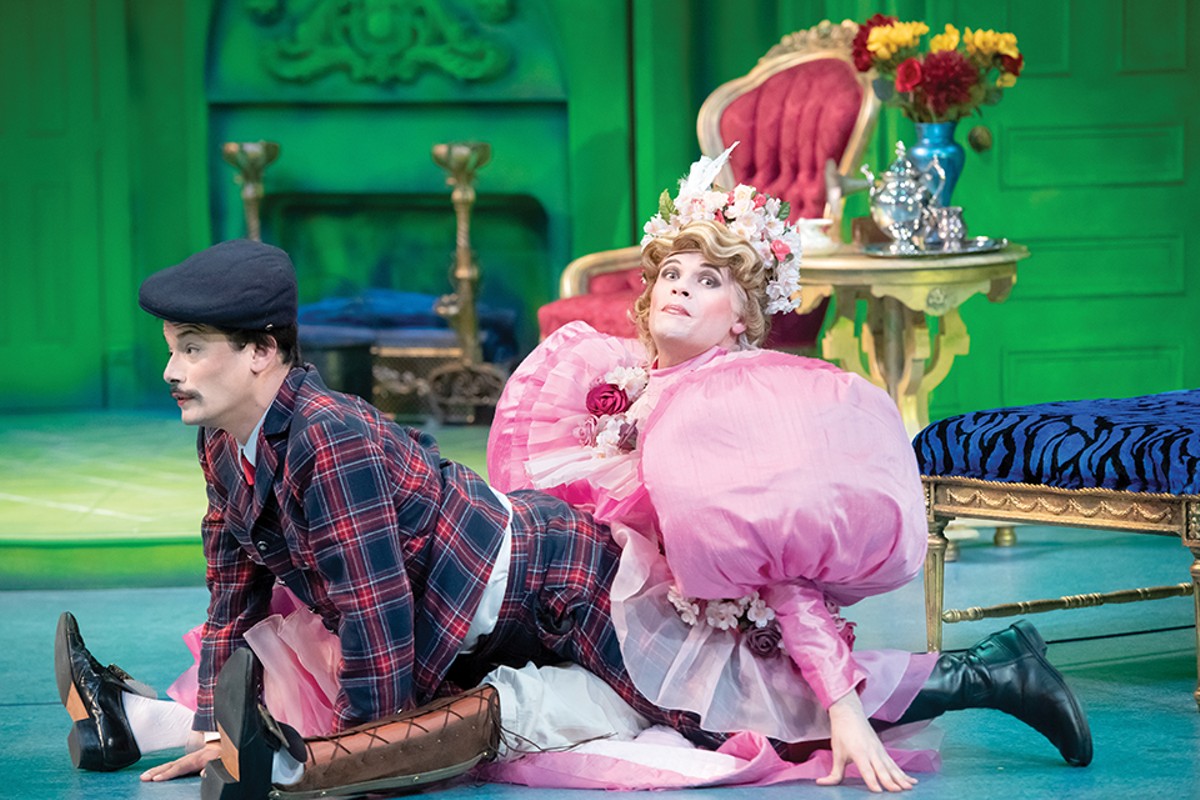 Lord Edgar and Lady Enid (Esteban Andres Cruz and Tommy Everett Russell) do get in some awkward situations.

The Mystery of Irma Vep

Lord Edgar, the diminutive but mighty nobleman and recreational Egyptologist has recently remarried, three years after the death of his beloved wife and son. The new bride is the handsome Lady Enid, an actor of no small renown who's finding life at the country estate Mandercrest to be a little lonely. The stately pile that is her new home is haunted by a wolf in the night, whose howling drowns out the wind from the moors, and that distasteful Nicodemus the swineherd creeps around the house trying get a good look at her. It doesn't help Lady Enid's state of mind that the only other woman present is the maid, Jane, who is openly hostile to Enid from behind her mustache.

Yeah, about that mustache. Lord Edgar and Jane are both played by Esteban Andres Cruz, while Lady Enid and Nicodemus are played by Tommy Everett Russell. Every character in the play is performed by these two men, who change outfits and demeanors quicker than you would think possible. Both men are also pretty handy with a costumed dummy and a hasty exit. The Mystery of Irma Vep, currently being produced by the Repertory Theatre St. Louis, is a mostly successful campy comedy that's at its best when Cruz and Russell are both on stage indulging in gleefully ridiculous antics. It loses its momentum when the actor onstage has to carry the load while the other is racing around behind the scenes to get in position for the next entrance, a hindrance no doubt exacerbated by the size of the Loretto-Hilton Center's Mainstage Theatre. With a running time of two hours, the comedy occasionally sags rather than sings.

Still, when they're on, Cruz and Russell are on. Charles Ludlam's script pays homage to Hitchcock's Rebecca, Victorian melodramas and the horror films of Hammer Studios. Indeed, scenic designer Michael Locher has created an imposing manse with a steep staircase, a parlour with a fireplace and several exits. Above it all looms a portrait of Irma (unfortunately visible only from one side of the theater) surrounded by red roses and surmounted by a massive, grinning skull. Lighting designer Marie Yokoyama douses it all in eerie green and menacing red lights, and her stylized lightning bolts are impeccable.

Cruz's Lord Edgar is a man of action who stalks the moors in search of that damned wolf and is fond of a dramatic pose and a wide stance but still releases a coquettish squeal when Lady Enid hoists him up in the air and spins. Russell's Enid has the charming wiles of a girl-detective, who subtly grills Jane for information about Edgar's first wife (Irma) and son. According to Jane, Edgar believes the wolf killed his small family, hence the hunting. Jane implies that she believes it may not be so clean-cut a mystery, which spurs on Enid's investigation. Before the play ends we'll all go to Egypt, revive a long-dead mummy and witness one character transform body part by body part into a werewolf right before our eyes. (Russell performs this metamorphosis with guile, panache and a magician's sense of misdirection. It's one of the best moments in the play.)

Despite the antics happening onstage, the play ends on a serious, albeit hopeful note. Charles Ludlum wrote The Mystery of Irma Vep during the 1980s AIDS crisis, and he himself succumbed to the disease. In the play's final moments, Lord Edgar and Lady Enid ascend the staircase to their bedroom, discussing the ancient Egyptians' bid for immortality. All the while, they slowly draw closer to that leering skull atop the set. Make fun while you can, for we all take that walk some day.

Jump to comments
« Three Tall Women Is a Tough, Beautifully Performed Drama   |   Head Over Heels Marries the Go-Go’s Pop-Punk with a Queenly Trio of Love Stories »