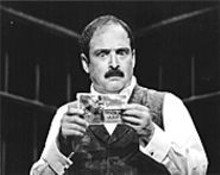 As just about everyone who loves film comedy knows, The Producers tells the story of slimy Broadway producer Max Bialystock, who tries to get rich quick by convincing wealthy old ladies to invest in a musical that he is certain will flop. Zero Mostel created the role in Mel Brooks' riotous 1967 movie, and Nathan Lane played the part in last year's smash-hit Broadway musical adaptation by Brooks and Thomas Meehan. Lewis J. Stadlen heads the national company, which opens a three-week engagement at the Fox Theatre on December 10.

"Lewis gets all the moments and all the laughs," says the soft-spoken Meehan, "but the brilliance of his performance is that he found the character on his own. St. Louis audiences need not worry that they'll be seeing a Nathan Lane clone. Lewis's Max is a complete original."

Speaking of complete originals, as Brooks' collaborator, Meehan has been privy to a side of him few people know. "The public Mel Brooks is not a shy person," Meehan says in wild understatement, "but the private Mel Brooks is also very funny all the time. You never know what's going to pop out of his mouth, but it's always the funniest thing you've ever heard. Yet he's also a serious, concentrated artist. I've only known a few people in my life who I could call a genius. Mel is at the top of that very short list."

Meehan's involvement with The Producers began in 1998. "I went out to Los Angeles to discuss a sequel to a movie Mel and I wrote together called Spaceballs," he recalls. "It turned out that MGM wanted the sequel to be an animated feature, but we had no interest in that. As I was leaving Mel's office to fly home, he said, 'There is this other thing -- I'm thinking of doing a musical of The Producers. Would you be interested in working on it with me?' It took me about a nanosecond to say yes."

As author of the book for the 1977 musical smash Annie, Meehan had the clout and the know-how to make Brooks (whose only other Broadway musical credit was a 1962 flop) sit still and listen. "We worked alone for almost two years before we showed The Producers to anyone else," Meehan says. "In the beginning, my biggest challenge was to persuade Mel to make changes from his original screenplay. It's a brilliant movie, but it's not a musical. In time, Mel got into the spirit of the thing, to say the least.

"Prior to Broadway, we tried out in Chicago. It was the dead of winter, so Mel bought us each a black, matching parka. We looked like two nuns as we walked the four blocks every day from the hotel to the theater. One day he said, 'This is the happiest I've been since I was nine years old.' He loved the entire experience."

So much so that he might try it again?

"We're working on a musical of Young Frankenstein, but we're taking our time," Meehan says. "After the success of The Producers, we don't want to rush into anything that might turn into a fiasco."