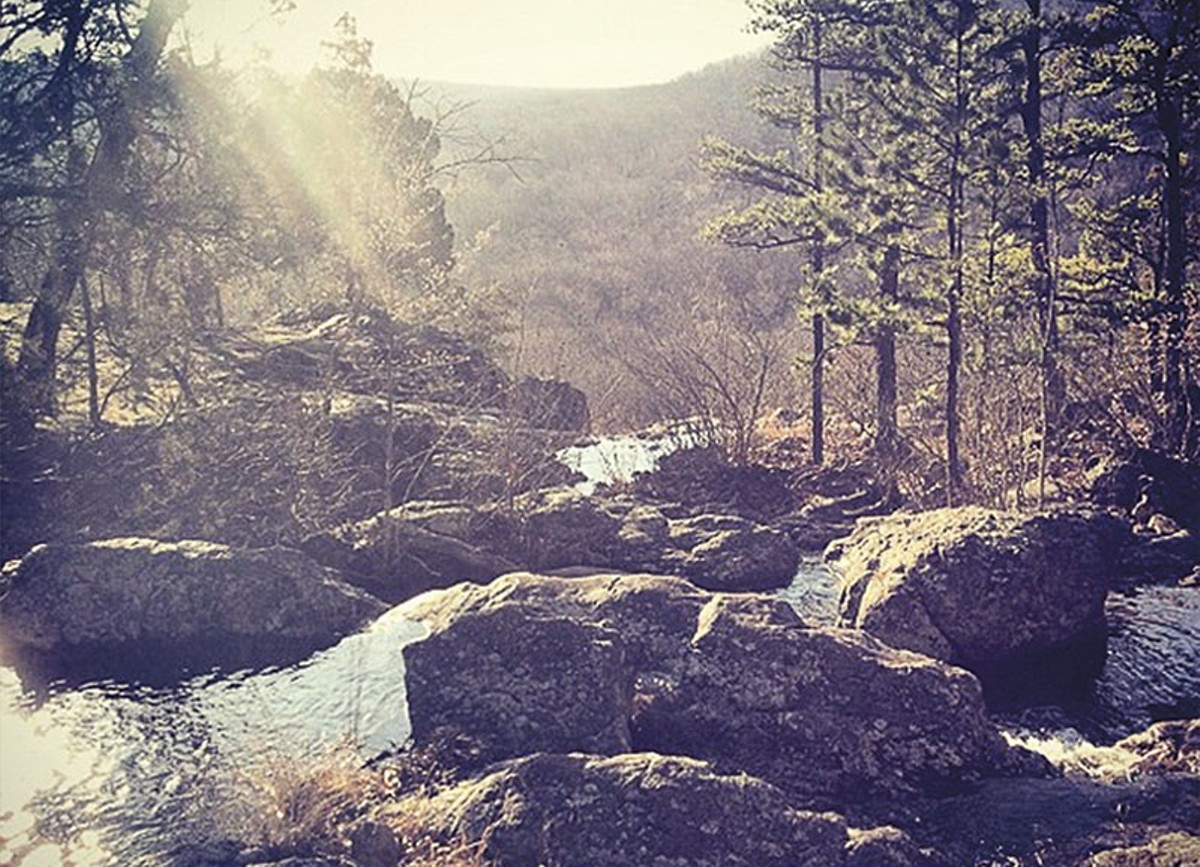 PHOTO BY KELLY GLUECK
Johnson's Shut-Ins, located just off the Ozark Trail, is a popular destination for families in the summer.

The so-called "Ozark mountains" of southern Missouri aren't mountains, and never were. Between one and four million years ago, this plateau rose and wrinkled. As streams carved out canyon-like valleys, rain and snowmelt seeped into the dolomite and limestone, crafting thousands of caves, sinkholes and springs.

In 1818, a 25-year-old New Yorker named Henry Rowe Schoolcraft walked these hills and took notes. He beheld much the same region that the Osage tribe and their predecessors had roamed for at least 9,000 years.

"Deer bounded on frequently before us," he wrote, noting how black bears hid in trees, elk wielded "enormous" antlers and wolves howled after dark. He climbed up to "stony precipices" and looked out on miles of pine, hickory and oak. Resting in caverns where his campfire light flickered on the rock walls, he pondered "the mysterious connection between the Creator of these stupendous works and ourselves."

This reverence for nature, soon to infuse romantics such as Henry David Thoreau and John Muir, would inspire the U.S. government to cordon off enclaves, such as Yellowstone and Yosemite, as national treasures.

But when the feds looked to the Ozarks a century later, it wasn't to preserve beauty. Quite the opposite: It was to heal a wound.

The first white settlers had come to the Ozarks from southern Appalachia in the early 1800s. Mostly of Scots-Irish stock, they initially claimed the fertile valleys. At mid-century, though, more folks came and settled on the slopes and ridges. The soil was rocky, but they found that if they just torched the forest and underbrush, they could let cattle and hogs range free. Fires roared regularly, denuding the earth.

The woodland absorbed another blow a few decades later, when logging firms harvested trees in massive numbers. By 1900, the Ozarks' virgin forests were gutted; by the Great Depression, the situation was bleak. Bankrupt families squatted on ground abandoned by lumber companies.

President Roosevelt's Forest Service concluded that almost eight million acres had fallen into waste, but if bought and managed scientifically, it could regrow. Missourians were suspicious of a government land grab, but also desperate. The state legislature enabled the purchases.

The handover was tense. Historian Will Sarvis wrote that hardy and self-reliant Ozarkers showed not only "low rates of formal education and literacy" but also "a warrior mentality that manifested itself in a tendency toward combativeness."

According to a Forest Service account, the squatters viewed the land purchases of the 1930s as "unwarranted government interference."

"It was not unheard of for a squatter or tenant to meet the threat of eviction with a rifle in his hand," the agency wrote. "Even a visit by Forest Service personnel could evoke a violent response."

And the Ozarkers clung to their custom of woods-burning. Seeking to set an example, the government prosecuted fire-starter Lynn Crocker in 1936. He got a six-month sentence, but not for starting the blaze; rather, he was convicted of breaking two of the federal officer's ribs during his arrest.

Within six years, Washington amassed 3.3 million acres into giant blocks. Four of them were christened the Mark Twain National Forest in 1939. (Other names floated: "Mozark," "Ne-ong-wah" and "Hill Billy.") The Civilian Conservation Corps planted trees, and the woods did grow back. Decades later, these wooded tracts would provide the islands of public land through which volunteers ran sections of the Ozark Trail.

But as the Forest Service gradually gained acceptance, a different federal agency landed with a jolt.

In the late 1950s, activists grew worried for the future of America's free-flowing rivers. So in 1964, Congress and President Johnson created the first federally protected riverine park: the Ozark National Scenic Riverways, a picturesque 134-mile stretch of the Current and its tributary, the Jack's Fork.

The legislation tasked the National Park Service with managing not just the water, but also 300 feet on each side — including 64,000 acres of private land. "Scenic easements" allowed private citizens to keep ownership near the riverbank, so long as they agreed not to develop it. Many landowners took the deal.

For those who resisted, the park service had a mandate to acquire. Early on, certain dishonest federal agents bullied landowners into accepting low-ball offers, Sarvis found. When holdouts wouldn't budge, the government used eminent domain, seizing more than 200 parcels.

The government's small budget and shortage of experts meant that appraisals came in low. Federal courts often remedied that by awarding Ozarkers higher amounts, but that was cold comfort. Resentment festered. Some residents responded with vandalism and arson.

"Native landowners," Sarvis wrote, "rather generally disparage the government as their enemy."

While this drama was still playing out, activists at the state level tried to push further: In 1969, they announced a petition drive for a ballot initiative to protect an additional 850 miles of 20 different Ozark streams. They proposed no land acquisition, just scenic easements.

The reaction was explosive. One opponent told a Post-Dispatch reporter that it was "not altogether impossible" that float-tripping canoeists might take a bullet in the head.

J.C. Yocum, a member of an opposition group in Crawford County, was quoted as acknowledging a possible compromise, but added, "It just seems to us that a bunch of outsiders, city people, have come down here in our backyards and tried to tell us how to run our land. We aren't going to let that happen."

An unnamed cattle rancher was more blunt. Referring to the chairman of the ballot initiative, Roger Taylor, he told the reporter: "If this thing passes, Taylor'll be the first one shot."

At 11:30 p.m. on April 27, 1970, a stick of dynamite exploded under Taylor's car, which was parked outside his St. Charles home. No one was injured, but the bomb destroyed the car's interior and shattered windows in his house. Another scenic rivers campaigner reportedly received a phone call soon promising, "You're next."

Two weeks later, the activists shut down their petition drive.