PHOTO BY KELLY GLUECK
Parts of the trail follow the Current River.

From the outset, the public-private Ozark Trail Council proceeded gingerly. They forswore eminent domain. Any landowner willing to participate, they felt, should himself dictate permissible use of his section — be it solely hiking or bicycling and horseback-riding as well.

The council didn't lobby small Ozark municipalities at all. They preferred direct chats with landowners — and a low profile.

"I'm nervous about user groups getting too publicly excited too soon about the Ozark Trail," Fred Lafser wrote in a February 1977 letter. "The last thing the landowners need to see is a proposal in the newspaper for a long trail for city recreationists."

Lafser wished to include Ozarkers in any decision-making. "It is essential that these people have a chance for input and a chance to hear the facts before they begin to hear rumors," he wrote.

The council showed no such hesitation when it came to public land. In fact, to push the trail closer to St. Louis, they tried to piggyback onto an unrelated federal project — but their plan backfired.

COURTESY OF THE OZARK TRAIL ASSOCIATION
Click in for a larger view of the trail.

In the late 1970s, the U.S. Army Corps of Engineers was planning to dam the Meramec River near Sullivan, about 65 miles southwest of St. Louis. The corps' primary goal was flood control, though the resulting 12,600-acre lake would have also been open for fishing, swimming and boating.

The Ozark Trail Council sought to insert the trail into the corps' master plan. The logic was laid out by Gerald Stokes of the federal Bureau of Outdoor Recreation in a letter he wrote to a fellow trail supporter.

If the dam gets built, he explained, the trail gets a green light along the Meramec. But even if the dam project collapses, perhaps the trail aspect could survive with the next owner. The Ozark Trail, he wrote, "should be completely compatible with the 'alternative,' no matter what that ends up being."

That was a miscalculation.

A zealous coalition of wilderness protectionists and property holders inside the footprint turned public opinion against the dam. They doubted its benefits and decried its costs: Not only would the lake inundate a scenic river valley and Onondaga Cave, but it had already displaced families in the flood zone, some via eminent domain.

In August 1978, a majority of voters rejected it.

That left the feds with 28,000 acres to unload. Most went to auction, but Congress conveyed more than 5,000 acres to the state of Missouri, along with two easements. One was a scenic easement along the Meramec of 300 feet on either side. The other — encouraged by the Ozark Trail Council — would in essence grant permission to run trail inside those ribbons of land.

In 1982, Missouri's General Assembly accepted the scenic easement, but barred the state from blazing the trail inside it. As former state parks director John Karel recalls it, area legislators had to placate constituents still resentful of the government seizures.

Fairly or not, the state's attempt to leverage the dam debacle to establish a trail, Karel says, "was seen as a very sneaky thing to do."

As it stands today, the 1982 law does not ban the Ozark Trail along the Meramec River. It appears to only bar the state from involving itself in such an effort there. Trail volunteers could make it happen, but they would have to obtain their own separate agreements with landholders.

Says Karel: "I think that's been a crippling blow to the completion of the Ozark Trail." 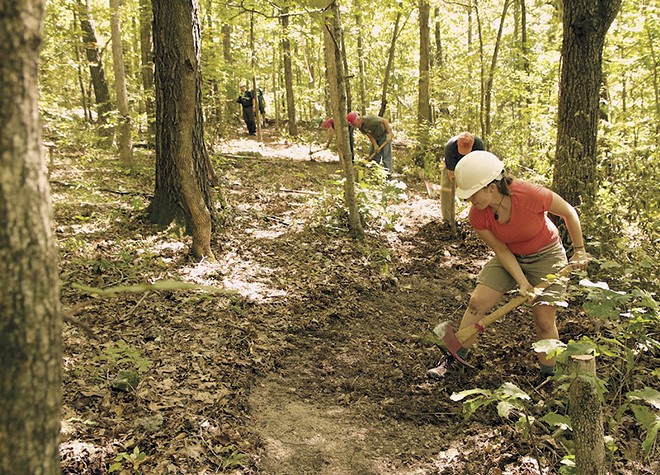 COURTESY OF THE OZARK TRAIL ASSOCIATION
Four "Mega" events each year draw numerous volunteers to work on the trail.

By the late 1990s, the Ozark Trail had broken the 200-mile mark, but some parts languished — including the corner of Mark Twain National Forest near Potosi, where Paul Nazarenko labored as a recreation technician.

"It was pretty much a brush patch," Nazarenko recalls. The trail council occasionally held meetings, he recalls, but didn't do much else.

So Nazarenko wasn't surprised in the summer of 1997 when a thirty-something St. Louisan named John Roth called. Roth complained that the Trace Creek section was overgrown. Nazarenko suggested he come in person to help him clean it up.

That Saturday, Roth showed up — in loafers, out of shape, an awkward city-slicker. But the two quickly became friends, and Roth kept returning. Within a few years, Roth had sold his computer consulting firm and began commuting daily to trail-build — just for fun.

"Building a trail is not brain surgery," Nazarenko recalls fondly, "but John used to treat it like that. He wanted it to pass the prettiest locations it could. We spent a lot of time arguing out there."

And then Roth dove deeper.

Even the nation's most prestigious through-trails — including the Pacific Crest and Appalachian — rely heavily on volunteer groups. Roth realized the Ozark Trail at the time had no such support.

So he linked up with John Donjoian, founder of the Gateway Off-Road Cyclists, a 501c3 in St. Louis that knew how to build trail and get grants. In March 2002, Roth and Donjoian met with the Ozark Trail Council to propose using that same model to set up an all-volunteer Ozark Trail Association.

"The land managers were thrilled," Donjoian recalls, "because they didn't have a budget to build trail. They barely had budget to take out the trash."

"He'd get you to do work that your spouse never could," says Kathie Brennan, the association's president. Roth was convinced that a steady trickle of helpers was ineffective. Better to lure a locust swarm of volunteers for a work weekend by promising free meals and camping. Charming and gregarious, Roth reveled in these events, called "megas," which sometimes drew more than 100 people from several states.

But tragedy struck on July 3, 2009. Roth was operating a tractor on his Crawford County farm when a tree fell, killing him.

After the initial outpouring of grief, the volunteers realized how much they'd depended on their founder. "We went into crisis mode," recalls Brennan. "We thought, 'Are we going to be able to get through this?'"

And yet they did. While the Appalachian Trail Association boasts 50 full-time staffers and a budget exceeding $8 million, the Ozarks version has only one such employee, and $133,000 annually to work with — most coming from government grants and private donors such as REI and the volunteers themselves.

Still, every year the Ozark Trail Association adds miles and raises funds with a 100-mile mountain bike race. Nearly the entire trail has been "adopted" by caretakers who clear their sections.

To understand why these people devote so much free time to a rocky footpath, one need look no further than the association's online forum, where hikers swap stories. They record encounters with hog-nosed snakes, feral hogs, baby raccoons, gangs of turkeys "exploding into the air" and moonlight serenades by an "owl choir."

They speak of strange sights: "Approaching each stand of pines gave an almost ominous feeling," wrote one contributor, "as if the trees were absorbing light instead of reflecting it."

The place names they mention, such as Devil's Run or Gunstock Hollow, suggest hidden histories. An entire section is named after the "karkaghne," an elusive cryptid said to prowl only the deepest woods, eating limestone and causing havoc.

Many hikers note on the forum how unexpectedly grueling the Ozark Trail can be. The highest peak is only 1,772 feet, but the constant up-and-down taxes legs, while the rocky terrain slows the pace. The association knows of fewer than 100 hikers who have conquered the "backbone," the continuous stretch of 230 miles from Crawford County to Oregon County.

Chiggers, ticks and spiderwebs terrorize summer hikers, who must also avoid poison ivy and bramble. The winter has its own perils: In January 2013, a father and two sons got lost on the Ozark Trail during a rainstorm in Reynolds County and died of hypothermia.

"A big part of why the Ozark Trail is important is that remoteness," says Donjoian. "You're out in the backcountry."

Of course, one man's backcountry can be another man's backyard. One forum contributor recalled a New Year's Eve along the trail: "We had long since settled into our tents and gone to sleep when the new year came in, but several shotgun blasts and the unmistakable sound of automatic weapons fire from the ridge above our camp reminded us that Missouri is home to all kinds of interesting culture."