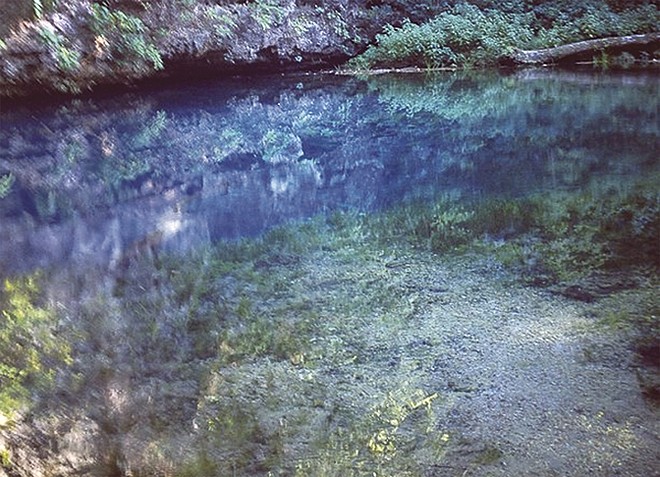 PHOTO BY KELLY GLUECK
Freshwater springs and landmarks such as Rocky Falls are just off the trail.

If the Ozark Trail ever becomes whole, it must bridge seven gaps of mostly private land. One such gap — about 25 miles as the crow flies — spans the hills between the hamlets of Thomasville in Oregon County and Pomona in Howell County.

The most scenic route would hug the Eleven Point River. But that might require passing through properties like Eleven Point Ranch, an 11,000-acre cattle and timber farm.

"I'm not dead-set one way or the other," says Nancy Shaw, whose family owns the farm. She fears that welcoming the trail would necessitate altering their fencing system, as well as interfere with how they rent out the property to hunters, which helps to pay the bills. "We live a quiet life, and to think you have all these people running around on your land. Are they going to be good stewards or not? We've had stuff stolen as it is."

Ken Kurtz, an Ozarks Trail Association board member, says fear of marauding hikers is common in the region — but misplaced.

"The truth is that hikers are more likely to pick up trash and haul it out than to leave it," Kurtz says.

This conception of hikers as eco-friendly tourists eager to plunk down dollars in small towns is one that the trail association actively promotes. It has resonated in south-central Ozark counties, which show some of the lowest median household incomes and highest unemployment rates in Missouri.

A finalized through-trail, backers believe, would lift the local economies it beads together. Perhaps the best analogy, they say, is the Katy Trail, the railroad-turned-bike-path that runs 237 miles across Missouri's midsection. According to a 2012 state study, the Katy Trail generates $18 million in revenue annually. It has boosted several towns in its path, including Augusta, Hermann and Rocheport.

There is no study that gauges the Ozark Trail's current impact. But the Ice Age Trail, a proposed 1,200-mile footpath across Minnesota and Wisconsin, is only partly complete, just like the Ozark Trail. A 2012 analysis concluded its combined 600 miles draw 1.2 million visitors each year, who inject about $113 million into statewide and local economies. A completed trail would surely have an even bigger impact.

Says Stuart Macdonald of the non-profit American Trails Association, "I think the most interest is in the 'brand name' trails that enable a multi-day journey."

PHOTO BY KELLY GLUECK
Clear markers guide hikers along the trail, even when it passes through private property.

In January 2016, the Ozark Trail Association presented its case at a workshop in the Arcadia Valley, where the towns of Ironton, Pilot Knob and Arcadia cluster among the hills of Iron County. The chamber of commerce was so impressed, it created a business owners' group to explore trail options.

Ironton mayor Robert Lourwood says he has personally lobbied landowners to sign off on a connector path to the Ozark Trail. He reports verbal commitments from four. "Even if hikers stay for just one night, buy two meals, go to the grocery store to buy provisions, it's worth it," Lourwood says. "I'm not looking for a grand solution; I'm looking for pieces of a puzzle."

Further southwest in Carter County, the Van Buren Chamber of Commerce has tried for years to lay a network of local trails. They want a path connecting their town center to Big Spring, one of the nation's largest springs, a tourist draw about five miles south of town. The chamber's hope was to get this path incorporated into the Ozark Trail.

Some stakeholders in that gap, however, don't want their land used as a conduit. Cattle farmer Gary Norris fears (among other things) that an easement would crater his property values.

"I can't think of a farmer around who'd be for this," Norris says. "Farming's hard enough if everything's going as well as it can be, but you put up other obstacles, it's even harder."

Adds merchant Mitch Terry, "We're not opposed to trails, we're opposed to them going through our front yard." After all, he says, the river has attracted "the party crowd" to Van Buren. "Makes you think maybe the trail will be like the river."

And for some locals, a rise in income is beside the point. Rebecca Landewe, a project manager in Van Buren with the non-profit Nature Conservancy, says that Ozark residents share a profound identification with the land.

"A lot of the reason people like living here is that you can be left alone," observes Landewe. "So the idea of inviting a bunch of strangers to walk across your property probably doesn't sit well."