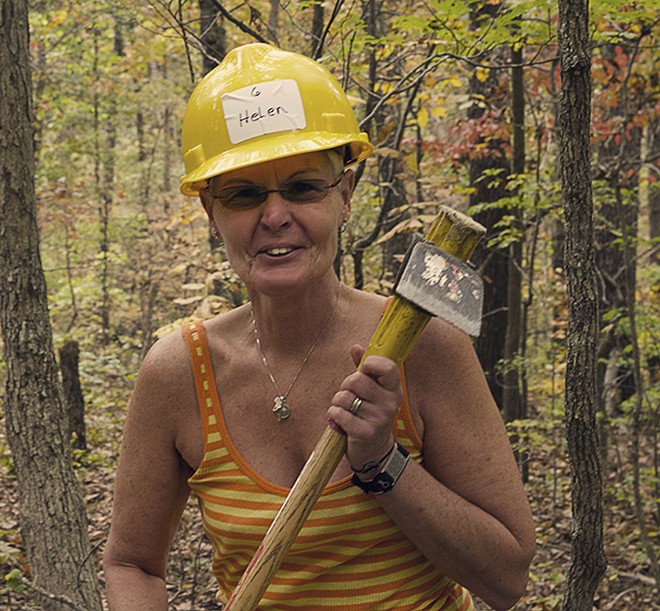 COURTESY OF THE OZARK TRAIL ASSOCIATION
Volunteers keep the trail clear and even lay new paths.

Growing up in Pacific, at the southwestern tip of St. Louis County, Steve Myers loved visiting Jensen's Point, a stone pavilion perched on a bluff with a panoramic view of the Meramec Valley. As a boy, Myers ate cheeseburgers there with his mom. Now he's an alderman who envisions his town below as a hiker's hub, offering access to both the polished network of St. Louis-area trails called the Great Rivers Greenway and the more rustic Ozark Trail.

Out of the seven gaps left to fill, this 39-mile stretch between Pacific and the Ozark Trail's northern terminus at Onondaga Cave State Park is the largest. But Myers insists on its feasibility — and believes a full through-trail will hold an allure that disjointed sections won't.

"There's a lot of pride in hiking the Appalachian Trail, for example," Myers says. "People may not hike the whole thing, but they can say they were on it."

If Myers is to fulfill his dream, he'll need allies. A year ago, he met with J.T. Hardy, city administrator of Sullivan, which lies in the gap. Hardy studied a map and discovered a way to bring the trail's northern terminus eleven miles northeast to his town's boundaries. He would just need to win over a half-dozen landowners, and establish a spur to Sullivan.

He would also have to rely on gravel roads as connectors. They are less scenic, so not ideal. But the Ozark Trail wouldn't be alone in resorting to this measure. The Ice Age Trail uses them too.

The result, Hardy believes, could benefit Sullivan. "To me it's totally conceivable to have it done, if someone wanted to spearhead it," Hardy says.

That "someone" has failed to surface in government for decades. Since the 1980s, no state agency or official has led the charge to completion — perhaps because so much of the trail winds through federal land. Or maybe they have more pressing problems. True, former Governor Jay Nixon did steer federal grants toward the Ozark Trail, and one of his last acts in office was to create three new state parks, including a namesake park in Reynolds County, accessible by the trail.

But Nixon apparently spent no political capital trying to extend it. And Governor Eric Greitens' office didn't respond to questions about whether he would prioritize it. It's likely not even on his radar. So today, in the trail's fortieth year, "there's a dearth of statutory authority," says former association president Roger Allison. No legislation protects or authorizes it.

And for the volunteers, completion is a long-range effort. They're still feeling their way forward.

"As trail guys, we're a little shy," Allison adds. "We don't usually go around asking people for easements. But who knows, we may be pleasantly surprised."

"At some point somebody will come along — a DNR director or a governor — and it will happen quickly," Lafser says. "But if nobody's supporting it, it will take a while."