The Rep's Mothers and Sons Tackles Heavy Subjects with Grace 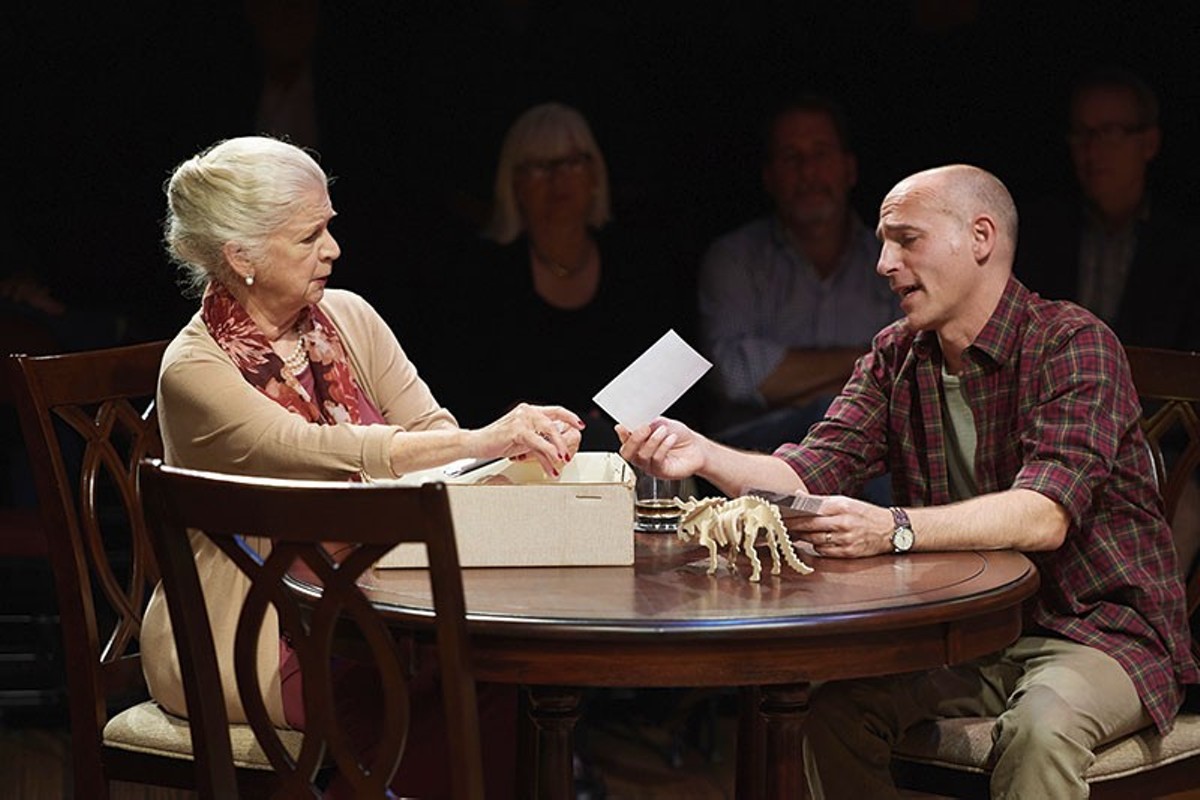 Presented by the Repertory Theatre of St. Louis at the Loretto-Hilton Center (130 Edgar Road; www.repstl.org) through November 13.

Terrence McNally's drama Mothers and Sons is about two forces that both shape our character, yet remain out of our control: the passage of time and our families. Set against an unexpected Christmas reunion between Cal (Harry Bouvy) and Katharine (Darrie Lawrence), the mother of his long-deceased lover, Mothers and Son touches on grief and regret, the slow advance of LGBT rights, the long shadow of the AIDS crisis and the complex nature of parental love. Surprisingly, McNally deals with all of these things in a little more than 90 minutes. Even more surprisingly, nothing feels rushed. Director Michael Evan Haney's staging of the show (now at the Repertory Theatre of St. Louis) is a richly layered feast for theater buffs. The story is compellingly told and the actors make it sing.

Cal and Katharine last saw each other twenty years ago at the memorial service for Andre, who was Katharine's estranged son and Cal's lover. Andre died of AIDS back when no one really knew what was killing all the gay men in New York, and the spot where they held his memorial is visible from the Central Park West apartment that Cal now shares with his husband Will (Michael Keyloun). On a playground in that same park, Cal and Will's son Bud (Simon Desilets) is currently playing on a swing set. All of this is conveyed through Cal and Katharine's stilted conversation. He's working hard to set his surprise guest at ease, but Katharine, still swaddled in a fur coat that is shorthand for "wealthy dowager," is exceptionally reluctant to comfort of any kind.

Their conversation is made more difficult because neither will say what they're thinking. As Will later points out, Cal is too nice to send Katharine away or ask her point-blank what she wants from him. Katharine doesn't have Cal's niceness problem, but she, too, refuses to ask what she needs to ask. So instead they reminisce about Andre in between awkward silences, most of which are brought on by Katharine saying something offensive.

Every line Lawrence delivers is freighted with barely restrained hostility. "How easily you use that word — 'husband,'" she chides Cal at one point, neatly disapproving of his happy marriage and his lifestyle with an economy of words. At other times she's blunter. "Andre wasn't gay when he came to New York," she assures Cal, who can only respond with an eyes-wide, "OK." But the more she talks, the less restraint she has.

Bouvy's Cal is a man painfully aware of how much better his life has become since he last saw Katharine. He has a beautiful home (incredibly realized by scenic designer James Wolk) made possible by his lucrative job, a loving husband in Will and a seven-year-old son who is, as the kids say, "woke." The only person who can stun Katharine into blissful silence is Bud, who asks her if her son died of AIDS, and then tells her he learned about the AIDS crisis at home and at school. Bouvy very subtly conveys a sense of survivor's guilt through the forced pleasantries he uses with Katharine and the way he placates his husband, who wants Katharine out of their house. Cal lived through the plague that took almost his entire generation — he doesn't want to see anyone else hurt.

But even he can't be nice forever. When he tells Katharine what it was like to care for Andre in his final days, all of his anger — toward AIDS, toward do-nothing Ronald Reagan, toward America and especially to cold and distant Katharine, who refused to acknowledge her son's illness — comes out in sharply barked sentences. Lawrence stands unmoved by the torrent, still refusing to acknowledge anyone's pain but her own.

Of course, Katharine will have her say, and it's a credit to both McNally's writing and Lawrence's performance that she is sympathetic in the end. The pain Katharine cannot articulate is finally addressed, and it is so horrible and pathetic that she can only be seen as a human being: frail, lonely and broken by the world — much like Cal was twenty years ago. It's the shared pain that binds a family together as much as the love and the communal late-night cookies and milk eaten in comfortable silence.

Jump to comments
« 13 Must-See Arts Events This Fall in St. Louis   |   Trae Crowder Aims to Be the Voice of Redneck Reason in Trump's America »