The Spirit of St. Louis

Two of the Lou's famous rockers fill us in on their favorites of 2007 — and what the next year holds.

By Annie Zaleski [email protected]
click to flip through (2) 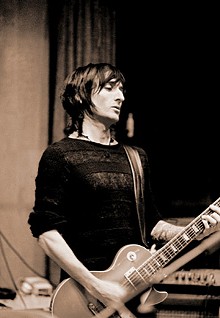 Many St. Louis musicians hightail it out of the city as soon as they can, with the hope that the sunnier pastures of Los Angeles or the chillier climes of Chicago will be more welcoming than our fair city. But save for a short stint in New Orleans, Son Volt founder Jay Farrar has lived in south St. Louis for the last fifteen years. And he's not going anywhere.

"St. Louis is still very much a city of immigrants and that — coupled with distinctive, historic neighborhoods — makes for a good quality of life, in my estimation," he says. "I'd rather be where the action is percolating as opposed to where the action is hyped and purported to be."

That low-key attitude informs Son Volt's latest album, The Search. Released earlier this year, the release finds jaunty horns and burbling organ adding soulful color to the band's trademark dusty alt-country and gentle twang. Farrar and a four-piece band toured heavily around that record in 2007; Son Volt also released a limited-edition, extended vinyl version of The Search (called On Chant and Strum), and recorded a version of the Beatles' "Hello, Goodbye" for an ESPN commercial touting David Beckham's arrival in LA.

Still, his packed schedule perhaps explains why Farrar goes out of his way to apologize that many of his favorite releases of 2007 weren't actually released in 2007: "It usually takes six months for a new record to get to me and then another six months of really letting it sink in, and by then it's often a different year," he says. Here are some other Farrar faves.

Beck, "Strange Apparition": It seems Beck is always good to keep things interesting. I like it when he channels songs or artists, and this time it's the Rolling Stones song "Torn and Frayed" spit back out as an idiosyncratic cautionary tale as seen through the windshield of a Mercedes-Benz.

Lee Hazlewood: Plenty of incongruous instrumentation and lyrical non-sequiturs to ponder. [Son Volt guitar tech] Jason Hutto and I spent the better part of a five-hour drive from Chicago soaking up a Lee Hazlewood and Nancy Sinatra compilation. We found out the next morning that he had died the same day we were listening.

Jimmie Rivers, Brisbane Bop: This CD was recorded live by the drummer. Is it Western swing or hillbilly jazz?  I don't know, but to me it always sounds fresh and intriguing.

Richard and Linda Thompson, Pour Down Like Silver: This was an "album" when it was released in 1975, and to me it represents the idea of the "perfect album." I always listen straight through, and often listen to the whole thing twice in a row.  The level of musicianship on this record is a marvel. And there is an element of mystery to it, down to the Sufi garb on the front and back covers.

Richard Fortus once attended a Replacements/X double bill at the legendary venue Mississippi Nights. At the time, he and 'Mats bassist Tommy Stinson were the same age. Two or so decades later, the two men are bandmates in the current incarnation of Guns 'n Roses.

It's a just reward for Fortus, a talented guitarist who first found fame in the '80s with St. Louis darlings the Eyes (who were later known as Pale Divine during their major-label days) and later in Love Spit Love, the criminally underrated '90s act that also featured Psychedelic Furs figurehead Richard Butler.

Fortus is still an in-demand musician today: In 2007, he played on albums by the Crystal Method, Puddle of Mudd, the Divinyls and Scott McCloud (ex-Girls Against Boys); worked on the Spiderman 3 video-game score and played on releases by three new (and completely separate) artists named Kerli, Krista and Karen.

As for G n' R, Fortus hit Australia, Mexico, New Zealand and Japan with the band this year, and in 2008 he hopes to be touring in support of G n' R's long-awaited album, Chinese Democracy: "No, really."

I can't stop listening to Kala by M.I.A. Great references (Pixies, Modern Lovers), love the Bollywood elements and the production is very fresh and exciting.

Sea Wolf, Leaves in the River. Great songs, feels very real to me, not contrived.

Wilco, Sky Blue Sky. I think this is my favorite Wilco record yet. Nels Cline is the most inspirational guitarist I've heard in a long time. Lyrically, the strongest Wilco record.

Radiohead, In Rainbows. This record feels so much more real and organic than anything they've done before, as well as having very solid songs. In my opinion, they are still the most important band of the last two decades.

Tacks, the Boy Disaster, Oh, Beatrice. They are an unsigned band that are unbelievable. Great arrangements, beautiful lyrics, criminally unknown.

Blonde Redhead, 23. Very different to anything they'd done previously. I know, I know, it's very Radiohead-ish, but they do it well.

Nine Inch Nails, Year Zero. I really had no intention of liking this record, but...I do.

Arcade Fire, Neon Bible. I think I like it even more than Funeral. They definitely avoided the sophomore slump.

The Shins, Wincing the Night Away. Didn't like the rest of the record nearly as much as Oh, Inverted World, and not quite as much as Chutes Too Narrow, but "Phantom Limb" is stellar.