The St. Louis Entrepreneurs Who Opened in the Pandemic

By Doyle Murphy and Madyson Dixon

In his new store — a pandemic venture that started out as a hobby — David Boykin is as much tour guide through the collections as salesman. He points out the Bing Crosby jukebox, a portrait of a high-society woman whose name is lost to St. Louis history, the few pieces of Josephine Baker memorabilia that haven't sold already, vintage KSHE bumper stickers designed to promote St. Louis tour stops of legends such as Pink Floyd, and more than 100 clocks, all but two in working order.

"The No. 1 comment: 'There's too much. I'm overwhelmed,'" he says. To make his point he gestures to a half Volkswagen taxicab that somehow disappears at the left of the entrance. "I have this gigantic car here, and they never see it."

Frenchtown Records, Antiques & More opened October 1 at 941 Park Avenue, a rare retail shop along the southern border of the LaSalle Park neighborhood, just across Interstate 44 from Soulard. It's in this location because Boykin and his wife Christine live a few doors down, but the reason the business exists at all is the pandemic.

"We were bored silly," Boykin says of the decision to bring the combination record-antique store to life.

The overarching narrative of COVID-19's effect on small businesses is one of destruction. While Amazon cashed in on the switch to increased online ordering in a socially distanced world and pocketed record profits that were more than $100 billion higher in 2020, the past twenty months have been an ongoing wake for St. Louis restaurants and mom-and-pop stores. The ones that have survived have almost universally suffered body blows that will leave deep bruises for years to come.

But it's not all ruin. Determined entrepreneurs have also found openings in the chaos to launch new ventures, expand operations or chase dreams they otherwise might never have pursued.

That was true of Boykin, who has a long-running financial services business in Clayton but was also inspired to do something with his giant collection of vinyl. His offerings at Frenchtown reflect his tastes, focusing primarily on rock, punk, reggae, soul and classical. The shop doesn't sell online, and the collection is smaller than that of other record stores, but tightly curated.

Christine Boykin, nicknamed the Chandelier Whisperer, works alongside her husband with a small staff to manage the many specialties of the place. David Boykin says they ended up doing the renovation on the two-story building themselves after finding it nearly impossible to find and keep contractors during the early pandemic. Eventually, they plan to host concerts in the adjacent lot and maybe even expand into the top floors or build a warehouse in back.

Asked if he would have recommended to his financial services clients to open a business during a global health and economic crisis, Boykins laughs.

"No. For anyone doing any type of retail, it's dicey," he says, even in normal times. "It's outrageous how much comes at you when you open a small business."

But for him, it was the opportunity to step back and try something new, something he says wouldn't have happened otherwise.

"If it wasn't for COVID," Boykin says, "this would never be here." 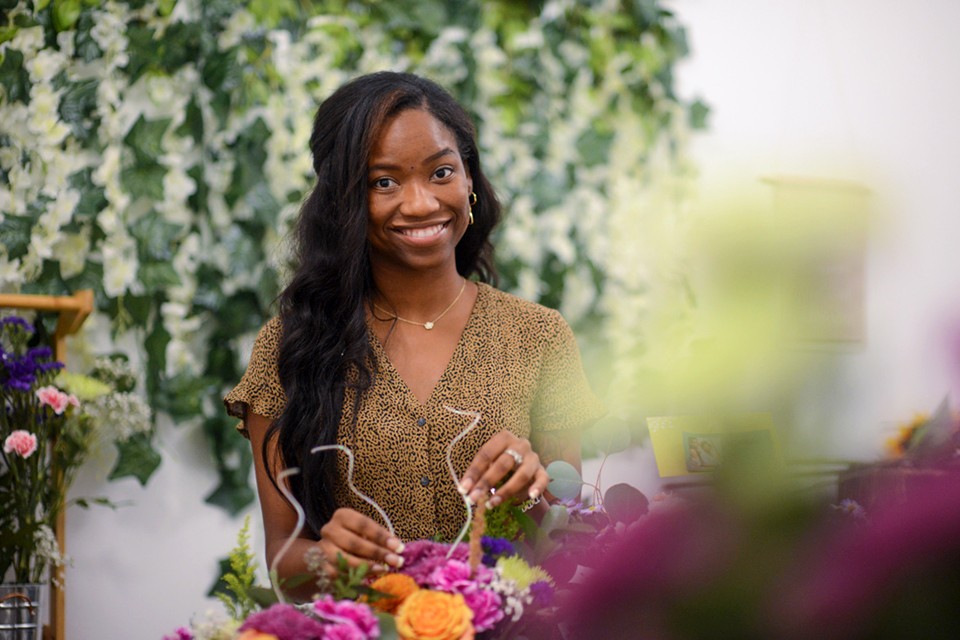 For Trisha Boyle, her business was growing, pandemic or no pandemic. She started Sophia's Crowns Flower Shop in 2018 in her two-bedroom apartment with the idea that flowers should be affordable to everyone. Beyond crowns, bouquets and arrangements, she offers classes, including Flower Crown Building and Sip for adults and Grow and Learn for kids. In the future, she plans to create a community garden and a greenhouse for flowers on a pair of lots she has leased through the Land Reutilization Authority in south city's 11th Ward. With everything going on, she needed a shop.

"I wanted to be able to deliver more for my market, and I knew to do that, I had to expand," she says. "I knew that I had to grow from my home to an actual brick-and-mortar."

The pandemic didn't change that. Looking online one day, she quickly found a space inside a former YMCA at 4500 South Kingshighway Boulevard that has been converted into a mixed-use development with apartments and a honeycomb of commercial spaces filled with small businesses. She held her grand opening on Juneteenth. She's found that COVID-19 has affected certain logistics — curbside pickup and touchless delivery became part of her offered services, for example — but the demand for flowers continues. There were still weddings and memorials, corporate events and friends sending good wishes. And all those people working from home needed a little life in their spaces.

The pandemic is a challenge, but Boyle is used to those. In fact, it was a hurdle that prompted her to start the business. Her eldest daughter, the shop's namesake Sophia, has a variety of allergies and has had severe eczema since she was a baby. Boyle says they were dealing with all that when she took Sophia, then three years old, to Tower Grove Park, where the little girl fell in love with the flowers. Boyle wanted to buy her a bouquet to take that feeling home, so she called a florist.

"The price was really expensive," Boyle recalls. "I was a college student at the time, a single mom. I said, 'OK, I cannot afford to get this,' and Sophia pretty much said, 'Mom, we should just open our own flower shop.' She said, 'So people can be happy like me, but not have to pay as much.' I told her that was a great idea, because it was."

In the years that followed, Boyle set about making that happen. The St. Louis native is a first-generation entrepreneur and says she has learned to navigate the challenges that arise. That includes the pandemic. She says she would be more afraid of failing to try than failing in business.

"We as St. Louisans, we're resilient naturally," she says. "If there's something we want to accomplish and do, we'll put our minds to it. We'll figure it out."

Sitting at home during the pandemic with her kids running around her, Betty Bayer found herself considering her plans for the future. She had been a librarian for years, but the idea of opening a bookstore had always been in the back of her mind.

"This [the pandemic] made me prioritize my goals and see what's most important to me," Bayer says.

With unexpected free time on her hands, she decided to take a class from the American Booksellers Association geared toward opening a store. Bayer says the class helped change what had been a longtime dream into a reality. Soon, she was figuring out concrete steps, securing a space at the edge of the Old Orchard section of Webster Groves and ordering her first shipments of books. Her concept was focused on creating a family-friendly space with a specialty in graphic books for readers of all levels and interests.

Betty's Books opened on October 23. Despite the ongoing limitations of the pandemic, the first weekend was such a success that Bayer had to replenish her stock. She says she caught people in the shopping mood that hit a sweet spot before Halloween and with Christmas gift buying in the not-too-distant future. The store sits in stylish digs at 10 Summit Avenue, a mix of dark walls and white shelves filled with the brightly colored covers of classic comics, newly released series and fan-favorite graphic novels. In a corner, kids will find a fort-like reading nook with an open wooden roof below neon storm clouds.

Betty's has already begun to host artist appearances (St. Louis' own Lauren Marx was a recent guest), and Bayer has plans for expanded events in the future. Her shop has a section selling the work of local creators, helping others in the area chase their dreams, too.

On the Hill, Jessica Mastrantuono-Hellmann spotted the future home of her pet store in the middle of one of the neighborhood's prime commercial strips.

"The more I looked at it, the more I fell in love with it," she says.

In July, she opened Ciao Chow at 1923 Marconi Avenue in the former home of Berra's Furniture. Mastrantuono-Hellmann has been involved in pet rescue since she was sixteen years old, and opening a retail shop was an opportunity to help fund her nonprofit All Paws Safe Haven. On a recent visit, she works behind the counter with the shop dog Frankie as well as Molly, a Staffordshire Bull Terrier puppy. The store is filled with dog toys, gifts made by neighborhood artisans and the shop's homemade pet food. Frankie slips off to the side and licks an extra of one of the doggy birthday cakes Ciao Chow offers. Mastrantuono-Hellmann is a third-generation Hill resident, and going into business here has only deepened her connection to the neighborhood.

"I knew most of the people here already, and now I'm getting to know them more personally," she says. That goes for their pets, too. Ciao Chow has become a regular stop on walks for dog owners, who drop in to buy a quick treat. 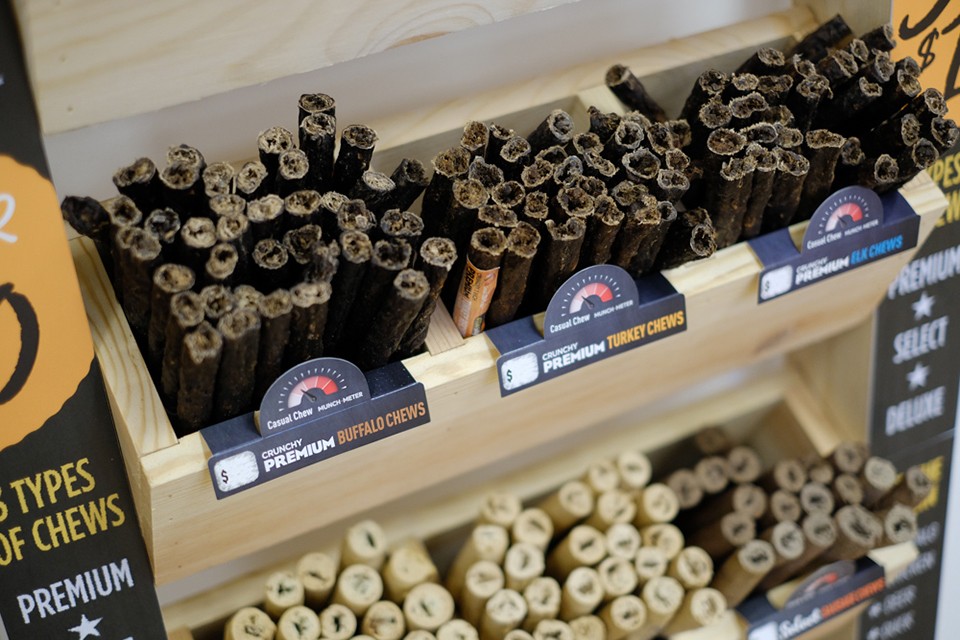 Opening during the pandemic has come with restrictions, including fewer of those personal interactions and just the general weirdness of the past year and change.

"It's not easy at any time," Mastrantuono-Hellmann says, "but [the pet business] is one of those industries that continues to rise. People will always spend money on their dogs."

The new shop has given her a central location. The separate rescue operation has always been foster-based, meaning it didn't require a physical space, but now that Ciao Chow is open, Mastrantuono-Hellmann can arrange handoffs there. In the future, she plans to add to the commercial business with a grooming service and maybe even expanded space. Eventually, opening in the midst of COVID-19 restrictions will just be part of the shop's history.

"The longer we're here," she says, "the more successful we'll be."

Jump to comments
Tweet
Email
Print
Share
« Andy Neiman Was a Comet Flashing Through the Darkness   |   The War on Drugs Failed — Will Radical Compassion Work? »