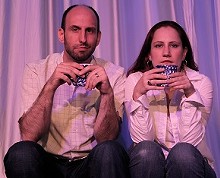 After three years of marriage, Travis and Alyse are calling it quits. They both knew this day would come; Travis is gay, and Alyse only wanted him for his American citizenship. But with the end in sight, maybe the couple should take a moment to reassess. After all, their fake marriage may be built on a foundation of lies and duplicity, but it's by far the healthiest relationship in either of their lives. Four Sugars is a new play in progress by local playwright and actor Stephen Peirick. You might recall that Peirick's debut play, Wake Up, Cameron Dobbs, which was a delightful comedy with heart and realistically flawed characters; with luck, Four Sugars is more of the same. Stray Dog Theatre presents Four Sugars as part of its New Works Laboratory at 8 p.m. Thursday through Saturday (August 21 through 23) at Tower Grove Abbey (2336 Tennessee Avenue; www.straydogtheatre.org). Admission is free but donations to help defray costs are welcome. Reservations are required; call 314-865-1995 for seats.
Aug. 21-23, 8 p.m., 2014