The Treats of Laredo: Tex-Mex returns at last to the corner of Park & Mississippi 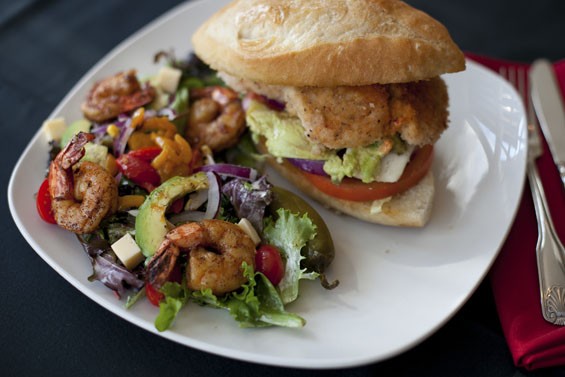 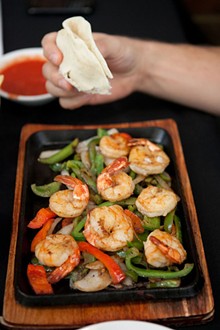 The Treats of Laredo: Tex-Mex returns at last to the corner of Park & Mississippi

Whichever enchilada filling you choose, the highlight is the sauce: a brick-red, smoky and mildly spicy chipotle brew.

The torta at Laredo on Lafayette Square might be the tidiest version of this classic Mexican sandwich that you ever encounter. Pick it up with your hands — with one hand, even — and its contents stay firmly in place between the two halves of a traditional bolillo roll. On your plate, untouched, it looks downright elegant: the crusty, golden-brown bread bracketing two chicken-breast cutlets prepared milanesa-style (pounded thin, breaded and pan-fried), red onion, lettuce, tomato and slabs of queso fresco (or similar cheese) nearly as thick as the cutlets themselves.

Is Laredo's torta an improvement on the overloaded, fork-and-knife taqueria variety? That is a matter of personal preference. Taken on its own merits, though, the Laredo torta is a very good sandwich, made with strong, simple flavors and a surprisingly light touch. The chicken's crust is thin and crisp, the meat within tender but not greasy. The cheese, tangy and pleasurably salty, steals the show. I'd be happy with a plateful of it and some bolillo slices.

Laredo opened in August at the corner of Park and Mississippi avenues, directly across from Lafayette Park. This was previously the home of Arcelia's Mexicana Restaurant, which closed at the end of 2010 after a twenty-year run at this and its original Soulard location. When Laredo owner (and Laredo, Texas, native) Pat Shelton bought the building in 2011, she told me she did so because she loved the original Arcelia's: "I had a passion for it. It's just a great environment. It's great food. The people are fantastic."

In fact, Shelton intended to reopen the restaurant as Arcelia's. However, while she oversaw a lengthy gut renovation of the space, two daughters of Arcelia's late founder, Arcelia Sanchez, decided to open a restaurant of their own, called...Arcelia's Mexicana Restaurant, which opened earlier this month in Soulard.

A new name suits Shelton's venture, though. While the restaurant's layout remains largely the same as its predecessor's — bar and dining tables up front, a second room accessed via a passageway at the back of the main room — the space is much brighter and cleaner, with hardwood floors, one wall of exposed brick and a neutral color scheme that doesn't distract from the views of the park and the Lafayette Square neighborhood.

Laredo's relatively restrained menu (fifteen entrées, plus starters, salads and desserts) is split between more traditional Mexican and Tex-Mex dishes and what it terms "fusion" dishes. The torta belongs to the traditional category. The sandwich is paired with either a salad or a soup. I opted for the latter, a homey tomato-based tortilla soup. Also among the traditional dishes are enchiladas, which come filled with your choice of steak, chicken or cheese. Whichever filling you choose, the highlight is the sauce that coats the enchiladas: not the insipid, "red"-flavored ranchero sauce typical of most joints, but a brick-red, smoky and mildly spicy brew.

An order of pollo en mole brings a plump chicken breast in a rich, nutty mole sauce with hints of dark chocolate and an accent of chile heat. Both the enchiladas and the pollo en mole come with the unavoidable sides of seasoned rice and refried beans, yet even these are a step above ordinary. The rice has a redolent, warming flavor of cumin while the beans are thick with the unmistakable taste and texture of bacon fat.

Among the traditional starters, the chunky, lime-spritzed guacamole is quite good. The thick, spicy chile con queso dip is a guilty pleasure. Both are strangely priced. You receive complimentary chips and salsa (bright red and probably the spiciest thing to come out of Laredo's kitchen), but orders of guacamole or queso also come with chips. This would be nothing more than a case of too many chips at the table, except at $8 and $9 respectively, the guacamole and queso seem a little steep.

The "fusion" entrées are ambitious in their conception but can be uneven in execution. They look sophisticated, plated like something you'd find at a bistro where main courses are priced north of $20, as opposed to Laredo's tags in the low teens. A six-ounce rib-eye steak, for example, is served on a bed of oven-roasted Yukon Gold potatoes and sautéed onions, green peppers and jalapeño slices, all of it splashed with a poblano-cream sauce. It's a good idea in theory, and it's attractive on the plate, but the steak is long and thin, not short and thick, which prevents the kitchen from getting the right balance of browned exterior and juicy (medium-rare, in my case) interior.

Even more lovely in its presentation was a chipotle-rubbed swordfish steak set atop garlic smashed potatoes and topped with a fruit salsa. The salsa, with a hint of chile, spiked the smoke-tinged fish, but the potatoes added unwelcome ballast — and the ones that weren't directly beneath the fish bordered on cold.

There are a few other hiccups: The menus are printed on flimsy office-weight paper and are reused frequently. Only once on four visits did I receive a menu free from stains and dog-ears. Service is friendly but sometimes confused: You may be seated by one of the cooks rather than a waiter, and the person who asks if you want something from the bar may or may not be the server who takes your dinner order and delivers your food.

These, though, are growing pains. Laredo is a welcome newcomer to one of the city's most beloved dining corners. And dishes like that torta suggest it has far more to offer than a new face on the same-old same-old.