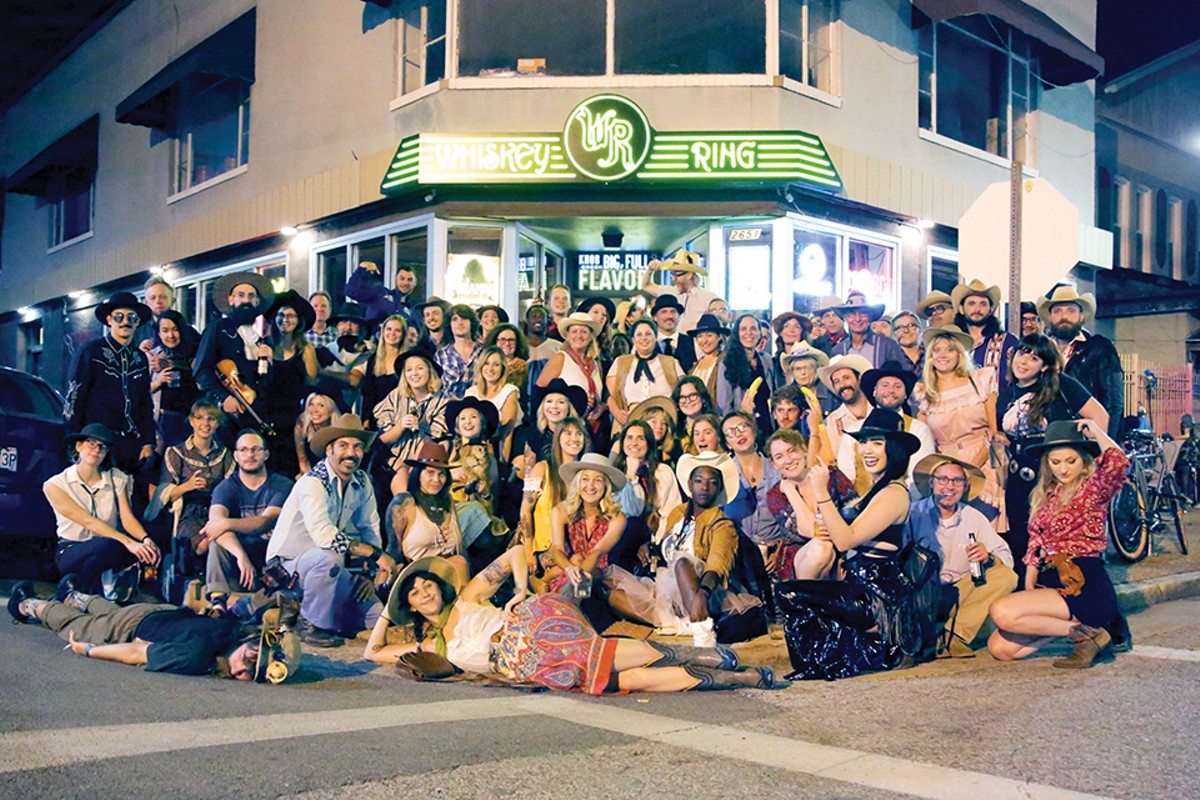 The Western Wear Night origin story starts simply enough. In November 2018, four St. Louisans donned their finest Western duds and went to show off their sharp looks at the Whiskey Ring. The reason? Because they wanted to. In that number: Piper McMahon, Jay Sanchez, Ryan Koenig and Lucas Hanner. The last member of that group had such fun that he decided the gang should get together again in another month, matching the date to Koenig's first and third Tuesday residencies at the Ring; it'd settle in as a third Tuesday tradition. Events can be born of such humble beginnings.

With modest expectations, their number grew to a dozen people their second time together, which felt like A Thing, but it really felt like more of A Thing in January of this year, with the number doubling to 25 for the third outing. Fast forwarding a bit, Western Wear Night eventually topped 100 attendees (on a Blues playoff game night) and then a few more than that showed up in July.

By the time that August's event was held, more than 350 people stopped through the Whiskey Ring, taking in music from Austin's Croy and the Boys, who performed with a variety of St. Louis musicians and burlesque performers.

In addition to the entertainment, vendors were on hand with the Trading Post, selling Western wear and other sundries. Burger 809, a newcomer to Cherokee, supplied food in the form of $5 boxed dinners, featuring a burger, corn and beans. In other words, by August, Western Wear Night had most assuredly become A Thing.

Seated in the tidy basement office of their home club on a recent weekend evening, Hanner and WWN Roundtable member Ron Strawbridge kick around their ideas on how something simple grew into a monthly promotion that's planned well into next year.

Strawbridge guesses that about 60 percent of the audience commits to the experience through their choice of clothing. "We have folks who dress like traditional cowboys and folks who aren't traditional, but you have to say to them, 'I love what you're doing. That's a 25-gallon hat and it works for you,'" he says. "Dressing up like a cowboy is what we all did as kids and what we're doing — and enjoying — now. It's nice to see everyone come out and enjoy themselves. You can come out, relax, have a really good time."

What the Roundtable is hoping to see is an event that draws beyond the characters that already inhabit Cherokee Street bars, even though that's been the obvious base.

After their last, breakthrough event, Hanner says that "we had people in their 60s and 70s out dancing in their Western wear. Was it Facebook that reached them? We do send word to KDHX. We had lots of people turn up for it that we didn't know, and it was pleasing to see how excited everyone was about it. Amazing."

"We are weirdos down here on Cherokee Street," Strawbridge adds. "It's a night to be a weirdo, but in a safe space."

With this comment, the pair break out a flyer that hangs throughout the venue for their event. The sheet reads: "Western Wear Night House Rules: We do not tolerate racism, sexism, ableism, homophobia, transphobia, fatphobia or general hatefulness. You will be asked to leave."

To that end, the pair agree that special event nights, when folks are dressed up (or dressed to perform), can bring out a gawker element. And that element, once some alcohol comes into play, can lead gawkers into talkers, gropers, etc. But with the whole of the Whiskey Ring's staff, performers and Roundtable members all singing from the same hymn book, trouble has been light to nonexistent.

That leaves an emphasis on fashion, yes. But also on music as much as anything else.

As noted, longtime St. Louis multi-instrumentalist Ryan Koenig was at the first event, and some versions of his many bands (such as the Goldenrods and the New Missouri Fox Hunters) have been showcased to date. He provides the PA, the sound expertise, much of the booking of acts. His role, Hanner says, has been key to the growth of the event. On Tuesday, September 17, then, Western Wear Night celebrates Koenig.

After that, Hanner says, future plans include a Halloween party on October 15 called Witches & Britches.

"It'll be the first Halloween party of the season down here," Hanner explains. "November will have our first anniversary party. Most likely, February will be the time that I want to share this crowd and fun and theme with the rest of the street. So I think we'll have the B-Side, Yaqui's and Earthbound all have their own Western Wear Nights and everyone will hang at their own party until 10 p.m. Then, the person that's voted the best dressed at each bar will go outside, into the street, for the Cherokee Street Showdown. And at whatever bar sends out the best-dressed winner, the trophy will stay there until the next February."

With growth, Hanner hears from more and more folks who have some ideas that fly and others that die.

Tossing out an example, Hanner says, "I got one for ya. I've got a friend with a line on some miniature ponies. They were asking me what the rules would be for bringing a couple of them to Western Wear Night. My reply was that it'd probably go okay; they allow dogs in, so why not ponies? I hope that happens in September, and I imagine it will.

"It'll be a good picture opportunity," he continues. "But they'll have to leave by 9 p.m. I don't even wanna think about drunk people at 1 a.m. with miniature ponies around."

So far, the members of the Roundtable have been quite happy with their people.

"I think the term 'family' is overused," Strawbridge says. "And 'community' can be overused, too, and I wanna be mindful of that term. The first people at the event, we knew very well. It started out with four buddies who cared about each other, and that's important to note."

"A lot of people are coming out who don't normally do that on Cherokee," Hanner says. "They're enjoying this brotherly and sisterly love we have going."

The next Western Wear Night is set for Tuesday, September 17, at the Whiskey Ring.