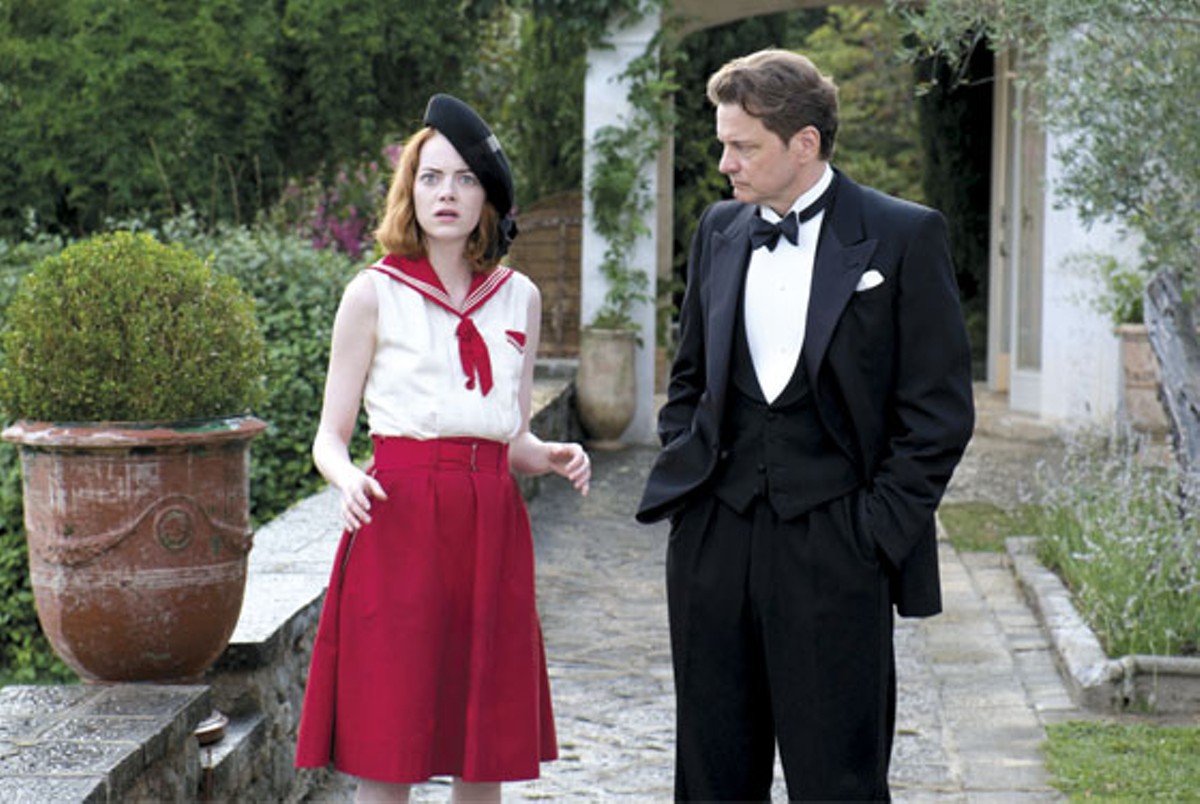 Emma Stone and Colin Firth try to bring a little shine to this Moonlight. Jack English

The heart wants what it wants," Woody Allen has taught us, and apparently what his heart wants these days is not to have to bother with writing second drafts of film scripts. His latest, Magic in the Moonlight, plays like a sumptuous vacation, its stars larking in '20s finery about the grandest estates of Provence and Côte d'Azur. Each frame is buttered by heavenly wealth — the splendor is part Gatsby, part Mount Olympus from the original Clash of the Titans. But as the stars roam those gardens and vistas in their jaunty flapper couture, the story feels shapeless, un-tailored and defiantly off the rack.

Magic in the Moonlight's mystery is pedestrian and predictable, and its lovers — Colin Firth and Emma Stone — fall for one another for no reason other than they happen to be the leads in a Woody Allen movie. Everyone declaims the film's meager themes, as if we're watching the actors' what's-my-motivation? prep work rather than their final performances. Even Stone and Firth speaking Allen's lumpish dialogue is something like getting down a mouthful of oatmeal. Occasionally, an actor will shape a line with the hopeful sharpness of a joke, which suggests that someone on set may have been telling them that the film is a comedy.

Firth has his moments, which is no surprise — he's Colin Firth. He plays Stanley, a famous but secretive stage magician and a boor of towering self-regard, who thinks he's the only person alive who has noticed that superstition is bunk and that there might not be a God. A magician friend (Simon McBurney) invites him to the home of some jillionaires to smoke out a comely medium (twinkly Stone) who seems to display miraculous gifts in séances — and who is poised to marry the handsome heir to the fortune, despite being a Midwesterner with no pedigree. Can rational Stanley expose what must be a very clever fraud — and preserve the class order?

Stanley tells us again and again that he believes in a rational universe. Allen has spent his life doing that, too, but always allowing for one exception: the reckless illogic of hearts. The tension between cool know-it-alls and their mad gushes of desire have fueled many of his richest and most insightful films. Rarely, though, has that conflict been so baldly and blandly aired. It even gives the film its slapdash structure: The first two-thirds show us Stanley chipping away at the mystery in listless séances and dithering, flirty interrogations, scenes Allen bites into with all the vigor of an old Irish setter gumming a tennis ball.

That wraps up with a half-hour of movie left — but somehow still long after you'll have worked the truth out for yourself. After that, Magic in the Moonlight lurches from overdetermined rationality to fantastical romance, as the godless universe bends over backward to unite a pair of characters who have not previously connected in any way that mere audiences might have noticed.

Stone does what she can: In both trance and romance she's more sly than the words coming out of her mouth, and she crinkles prettily at Stanley, but only Allen knows what exactly she's crinkling at. Anyone nostalgic for those scenes of Annie Hall getting upbraided for not going back to school will relish Stanley giving Stone's medium prickly lessons in Nietzsche and survey-course Shakespeare quotes. Has anyone yet assembled a YouTube super cut of Woody Allen heroes telling younger women which books to read? And by this late date, is there even any point in crunching the numbers between Allen's leading men and leading ladies? If X is Stone's age, Firth's is 2X + 3.

Both Stone and Firth look smashing, posed on cliff sides and in roadsters with the sun in their hair, and that may be enough for audiences just hoping to buy 100 more minutes in Allen's Midnight in Paris–style, lost-generation timeshare. But by the final third, Stone gets stuck playing the cheapest romantic-comedy nonsense. To set up the cute final moments, her character must say and feel wildly contradictory things in back-to-back scenes — all toward a man who has, for most of the movie, been a charmless prat determined to shame her.

At one point, midway through, Stanley becomes convinced she does have some ability to contact a spirit realm, which for him means science can no longer be trusted and that maybe there is a God, and on and on. He calls a press conference to announce this and introduce her to the world; it's the movie's biggest laugh, as, for some reason, the reporters questions are all directed at him.

Such uncertain, ill-considered scene craft is a hallmark of Allen's late-late period. But I can say this for that sequence: It's the one thing in Magic in the Moonlight that doesn't feel dispiritingly familiar. Allen's habitual productivity — a movie a year, whether he has something to say or not — has made his films something more like rituals than events. Last year in these pages, Stephanie Zacharek compared going to see Allen's annual offering to checking in on an elderly relative you hope is having a good day. A trick I've picked up is always to try to get such a relative to tell a story you haven't heard before. Is it too much to ask the same of one of the world's most distinguished filmmakers? 