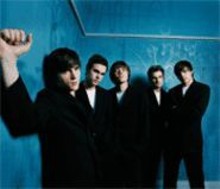 There's no denying the appeal of pop music. It's a trans-generational sensation; every teenager eventually purchases at least one Beatles album. But by the late 1980s, infectious, hook-i-fied pop had become an instrument-less, pop-and-locking Lou Pearlman monster in a velour tracksuit.

While pop's commercial appeal remained strong, it arguably owed to the singers' baby faces (i.e., New Kids on the Block) and their ability to vamp like Fosse-philes. Their music was more fad than advancement, and while The White Album still consistently sells, Hangin' Tough is found in bargain bins and purchased as ironic nostalgia.

So where does a pop band — one that crafts intricate, memorable melodies and plays its own instruments, one that writes about crushing wants and wave-catching — find a home? Just ask Boston-based quintet the Click Five. The dress-suit-sporting bandmates found success with their single "Just the Girl" (which is the theme song for the MTV reality show Miss Seventeen) — and found themselves popular with fourteen-year-old TRL fangirls.

But one shouldn't expect to see the Click Five act like a boy band. After all, as guitarist Joe Guese says, "I never really could dance."

So if nothing else, one must applaud the Click Five for daring to plant their non-dancing feet and brave the critical backlash.

"We get written off pretty easily by people who actually might like us, that's the frustrating thing," muses bass player — yes, player — Ethan Mentzer. "You get put into that group of non-credible pop when you tour in those circles and market yourself in those circles. But for those that want something that's real and credible, I just don't think many of them will give us a shot."

The Click Five are pop nuts who met at the prestigious Berklee School of Music. They began like any other college band, playing in the basement of empty bars to a smattering of drunken students. But in indie-rock-happy Beantown, Mentzer claims, their upbeat melodies and uniform suits — which they wear as homage to the '60s idea of "dressing up for your audience" — were met with furrowed brows and confusion. "Most of them didn't get it, they didn't like us, they didn't get what we were doing," he says. "We were wearing suits and playing pop songs. They'd be there with their arms folded."

But the Click Five were still getting local radio support. Boston's Top 40 station, Kiss 108, played selections from their hit parade and eventually gave them the biggest boost of their career: opening an Ashlee Simpson concert. An A&R person at the show encouraged them to showcase, and by the end of October 2004, they had signed with Lava/Atlantic and began recording their debut album, Greetings from Imrie House.

The Click Five then did a brief tour with Simpson, where they were well-received onstage and well-sold offstage. But while their MTV-friendly standing may repel blind mainstream haters, it did not adversely affect them within the power-pop circuit.

"It's fun to talk to the power-pop freaks who are obsessed with it and will get into anything they find — guilty pleasure or not," Mentzer says. "We've met a lot of fans that we didn't expect to have — a lot of 40-year-old men! And that's really fun, to talk to people who say, 'Man, I love stuff from the late '70s and early '80s, and I haven't heard anything like this in years! This is great!' People like that can appreciate the work we put into it."

Yet one assumes that TRL kids don't appreciate the Click Five's impressive musical abilities — although Guese and Mentzer don't expect such recognition for their skills.

"I don't know that many people are going to notice. If you do the job well — something that's difficult — it goes without being noticed," Mentzer says. "Like film editing — it's a really difficult task, but if it's seamless and done well, you don't even notice it, whereas if it's a poor job, it becomes annoying."

"A popular misconception is that writing a three-minute pop song is a lot easier than playing bebop or something," Guese adds. "I don't think people realize that it's actually really difficult to craft something catchy."

Still, Guese doubts that the Click Five is heading the second coming of a pop revolution, à la the Beatles. "I don't think anything quite like that will ever happen again," he says. "Right after Kennedy was shot, it was just such a weird thing to have this self-contained group come over who wrote their own songs, performed their own songs. That was such a revolutionary idea at the time. I think bands will have success, but I don't think anyone can have success on that level."

So what are the Click Five doing? They're uniting old-school pop with new-school power, while maintaining a keen focus on not being too cool for either. And on that playground, they'll be fielding foursquare: teenyboppers with crushes, power-pop freaks, well-crafted-music fans and indie snobs who won't give them the time of day. But they don't give a damn which cliques they reach, so long as they can reinstate some of the eye-rubbing innocence of a hard day's night.

Says Mentzer: "We're trying to bring back pop — not just to play to these young people, but also to tell them where we got these ideas, and hope that they'll get into some stuff that's older and have appreciation for it."