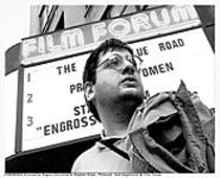 Wednesday, January 14 We in the Night & Day department, on the whole, are suckers for toys, especially the collectible ones. We dream of endless aisles of twelve-inch G.I. Joes in pristine condition and regale one another with tales of action figures seen at conventions and in catalogs. "Toys and no money is better than money and no toys," we assure each other while eating relish packets for lunch as we covet one another's Star Wars collections. It's an iron-clad lock that we'll be attending the International Toy Collectors Association Toy Roadshow (Holiday Inn Airport North, 4545 North Lindbergh Boulevard) sometime between today and this Saturday. Open to the public from 9 a.m. to 7 p.m. daily and with no admission charge, this show comes with buyers who pay cash on the spot for old toys; not that we would ever part with anything, but it would be nice to know the street value of a childhood that has lingered into one's early 30s. Call 877-494-1193 for more information.

Martin Luther King Jr.'s birthday always gets people thinking about the man's life and his accomplishments. In honor of the holiday, the Meramec African-American History and Culture Committee of St. Louis Community College-Meramec (11333 Big Bend Boulevard, 314-984-7500) presents Music and Poetry of the Struggle, a free performance that celebrates these intertwined artistic elements of the Civil Rights era. King's speeches served as the catalyst for many people's consciences, forcing them to either think about or rethink their place in America, and his words continue to inspire people 40-odd years later. King's enduring legacy rests on the power of his words, and poetry harnesses that power in a most elegant way. Meet at noon in room 123 of the Student Center to hear the spirit of King live on in the words and music of the next generation of earth-shakers.

In the days before fancy digital-imaging suites, further back even than the existence of Kinko'ses, if you wanted a poster to advertise your new musical-theater performance, you called upon an honest-to-God, ink-fingered "artist" to do your designing work. Sure, the Photoshop-and-mouse crowd are artists, too, but we're talking about a class of artists who worked with nothing more than a handful of pigments and a vivid imagination to create memorable, compelling and absolutely temporary works of art. Opera, sometimes called the world's most expensive commodity, demanded opulent posters -- not only to do justice to the lavish costumes and sets but also because the advertising had to reflect the extravagant nature of opera itself. Many of these beautiful posters would be lost to history were it not for the obsessions of collectors like John Frank Lesser. Lesser's Vintage Opera Poster Collection features posters from as far back as 1845, with an emphasis on Italian posters from the nineteenth and twentieth centuries. His life's passion is on display on the second floor of the City Museum (701 North 15th Street, 314-231-2489) through April 10, and admission is free with the usual museum charge of $7.50.

"Aaarrrrrrgggghhh!" That's what's going through your head when the sliding doors part at the St. Louis Science Center Minority Scientists Showcase, today through Monday at 5050 Oakland Avenue (314-289-4444, free, www.slsc.org). The ordinary noise and chaos of hundreds of kids running and screaming their way through the museum is magnified when the center welcomes a few dozen organizations and their booths o' fun. The groups, representing various science, engineering and minority groups, are here to help get children excited about science with hands-on activities and freebies. In years past this event has featured programmable robots, experiments with water, strange biological samples floating in goo and plenty of materials for parents who want to grease the gears for their science-inclined progeny.

Maybe you're a veteran of those summertime car shows, with acres of parking lot crammed full of obsessively restored and polished vehicles -- but have you ever been to a motorcycle show? With their choppers, Hogs, dirt-bike racers, Gold Wings, police bikes and trikes, these shows are a different animal, and they bring in a different crowd. Check out the ABATE of Illinois Swap Meet & Motorcycle Show from 10 a.m. to 4 p.m. at Collinsville's Gateway Convention Center (Hwy. 157 just north of I-55/70). Ogle the chrome, smell the leather, and get in an argument with your father, just like Paul Sr. and Paul Jr. on the Discovery Channel's American Chopper. ABATE, which stands for A Brotherhood Aimed Toward Education, offers valuable info, legislative updates and social and charitable fun for motorcyclists. Today's event includes door prizes, drawings, food-and-drink concessions and vendors ($6, free for kids younger than twelve accompanied by an adult; 800-87-ABATE; www.abate-il.org).

Good documentaries give us a sense of voyeurism; great ones give us empathy. Cinemania, screening tonight at Frederick's Music Lounge (4454 Chippewa Street, 314-351-5711), is a great one. The 2002 doc follows five New Yorkers all possessed by the same need: to see as many films as possible. Anyone with a type A personality can relate to the way these folks make endless lists and coordinate dozens of film schedules to maximize their time. Each of these cinephiles, however, is certifiably nuts, and it's harder to relate to some of their other habits, such as eating nothing but peanut butter sandwiches and getting into fights with ticket takers and projectionists. The free popcorn and meta-movie action gets going at 7 p.m.

Just after the fall of the Berlin Wall, business at German salesman Bernd Willenbrock's used-car lot picks up; his personal business picks up, too, in the form of a few extramarital affairs. Then a series of thefts and assaults leaves him feeling angry and paranoid. His personal life suddenly begins to lose its luster, too. It seems that opportunities, economic and otherwise, may not be all they're cracked up to be in the new Germany. That's the gist of Christoph Hein's Willenbrock: A Novel, translated from German into English by local Philip Boehm. Boehm reads from and signs the satirical novel at 7 p.m. at Left Bank Books (free, 399 North Euclid Avenue, 314-367-6731). Boehm, who has also translated Kafka into English, knows his Schadenfreude from his Schicklgruber.