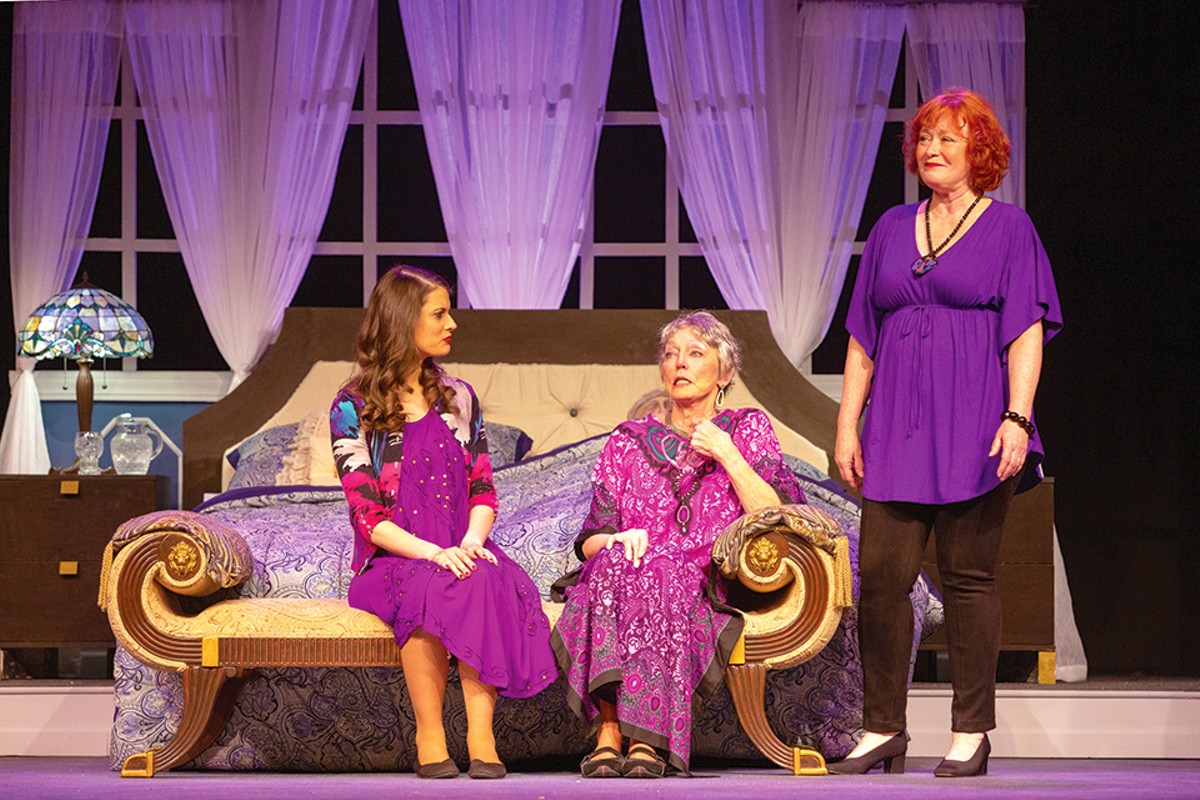 "A" has come to the end of her life, and "B" is there to help her manage these final hours with comfort and dignity. "C" is present to remind "A" of all her unfinished business, and the dreams, hopes and fantasies she's lost along the way. It's a cruel thing to do at the end, but "A" is well-versed in cruelty, callousness and long-held grudges.

Edward Albee's drama Three Tall Women takes place in the bedroom of an aged, patrician woman, and in her memory. Their names are placeholders, because A has trouble remembering names and people. All she has left is her anger, her pride and the unceasing pain of a broken arm that will no longer heal. It's a tough play, but you have to be tough to get to A's age. Three Tall Women, currently being produced by Stray Dog Theatre under the direction of Gary F. Bell, revels in that toughness. It's an unflinching production, but there are flashes of tenderness that help to limn the character of A with an inviolate humanity. If you live long enough, you'll lose the people you most love, either through death or your own actions.

Bell's cast of three — Jan Meyer, Donna M. Parrone and Angela Bubash — portray the same woman at different ages. Meyer played A in St. Louis Actors' Studio's 2016 production and here reprises the role with the same flinty-eyed pragmatism. In the first act, she's forgetful and frail. Her caregiver, B (Parrone), indulges her fancies and kindly helps her navigate the blank spots in her memory. C (Bubash) is a representative of A's lawyer and tries to command the old woman's attention and then chides her for her failing to stay on task.

Their three-way conversation is spiked with Albee's trenchant wit and a musical sense of timing, as shared lines pass from one woman to the next. In the second act, all three women are A at different stages of her life, gathered together in A's failing memories as her physical body goes about dying. Bubash is A at 26, a fun-loving young woman whose confident "I'll marry and be happy" is quickly dismissed by Meyer with a hand flap and a weary, "We'll talk about happiness."

It's Parrone who's stuck in the middle at 52, both chronologically and emotionally. Her A is wiser than Bubash's but also wants to know what changes come in the next 40 years to make her so lonely and aggrieved. That question is answered when their son comes to visit and Parrone flares into a screaming rage at the sight of him. Even Meyer, so wise and all-knowing, seems shaken by the fury of her younger self.

The question hangs over this second half of the play: Why isn't A able to forgive her son for disappointing her and leaving her? Why wasn't he able to take the first step toward reconciliation? Bubash's young A, so full of dreams for a happy family, is stunned into horrified silence by it all: How does love die so quickly? How does a family degenerate into warring factions?

All three women are excellent, and Bell's direction is so smooth that the intermission comes unexpectedly soon. If there's a flaw here, it's that the final moments come to an abrupt end and almost don't land.

But maybe that's how death is. Just when you think you've hashed it all out and have finally come to grips with life, the lights go out.