Timothy's the Restaurant Is a Love Song to Fine Dining 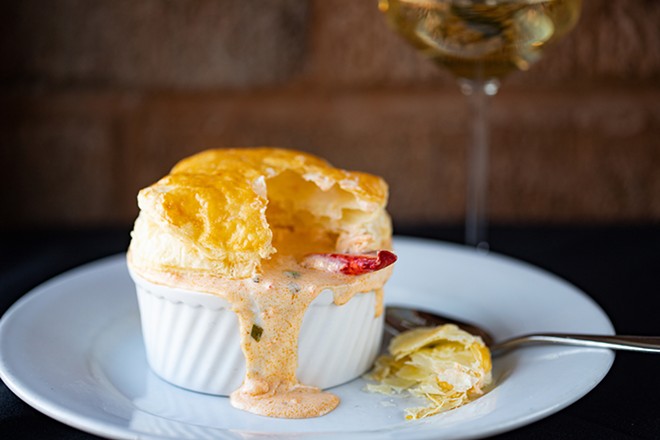 Sitting at a black-tableclothed six-top inside Timothy’s elegant, dimly lit dining room sometime between the lobster pot pie and Caesar salad course, a flash of gold caught my eye. Roughly five inches long, the narrow metallic object was not merely a means to rid my table of puff-pastry crumbs, but a flashback. It had been years since I’d seen a crumber used in a restaurant — probably a decade and a half ago that one last graced my table, and not many more before that when, as a fine dining server coming up in the late 1990s, the simple tool was considered a part of the uniform, as essential as black non-slip shoes and a stiff white button-up.

At some point, this changed. Bar towels subbed in for napkins, meatloaf showed up on every high-end menu, indie fast-casual spots became hubs of culinary innovation and food writers waxed on about the death of fine dining. Places that used crumbers, it seemed, became as much relics of dining past as the small gilded tools themselves.

Steven Manns, Timothy Metz and Sean Olson disagreed with that sentiment. This past August, the three business partners opened Timothy’s as an unapologetic homage to the way they love to eat, crumbers and all. Located in a small storefront in a strip mall in Creve Coeur, Timothy’s is their love song to the quintessential fine dining experience that they’ve found so difficult to come by in recent years — one that brought them together in the first place. 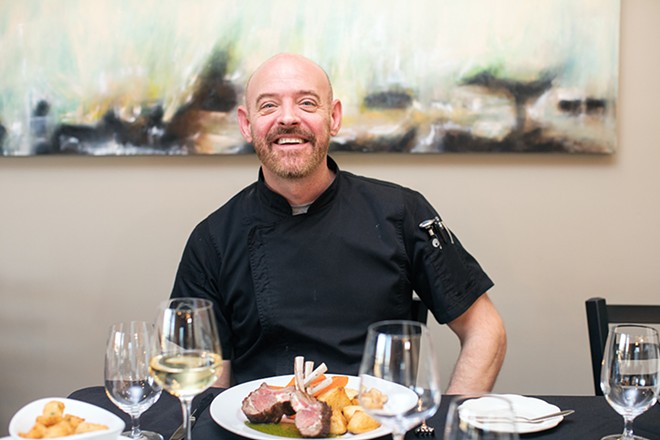 MABEL SUEN
Chef-owner Tim Metz is part of the trio that opened Timothy's the Restaurant in Creve Coeur.

Those seeds that would become Timothy’s were planted several years ago at Herbie’s in the Central West End. There, Manns worked as a lead server and would always take care of Metz and Olson when they would come in for dinner. The three developed a friendship that eventually flourished outside of the restaurant; whether going out to eat or putting on elaborate dinner parties at their houses, food, drinks and hospitality were at the center of everything they did.

The more the friends engaged with their passion for food, the more Metz got into cooking. Completely self-taught, he began experimenting in his home kitchen a couple of decades ago, starting out by learning how to make dishes like Bolognese or risotto the correct way. As his confidence and skills grew over time, he became the one in his friend group who was called upon to do the cooking. It made sense, then, that when he, Manns and Olson put on dinner parties, Metz was the one in the kitchen.

Over time, the three started talking about turning those just-for-fun dinners into a restaurant of their own. They had the background for it; Manns has extensive upscale-dining front-of-house experience, Olson has a degree in hospitality and restaurant management, and Metz, too, has a significant restaurant resume, including Pickles Deli in the Central West End and downtown, which he and Olson have owned for the past fifteen years. As their discussions turned serious, the three began looking for locations and stumbled upon the former Olive Street Cafe in Creve Coeur. Curious as to why the area lacked more independent restaurants, the three signed a lease and got to work transforming the once casual cafe into the elegant bastion of fine dining they knew it could become. 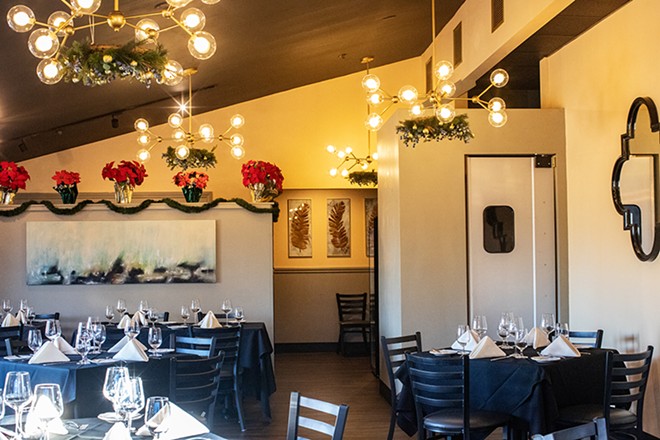 MABEL SUEN
The main dining room at Timothy's the Restaurant.

That work is impressive. In place of the basic counter-service daytime spot, Manns, Olson and Metz have built up a sleek modern space. The small restaurant is divided into two parts; diners enter into the bar-and-lounge area, outfitted with black cocktail tables, red leather banquettes, charcoal and white walls, and an open kitchen. A doorway to the left leads to the main dining room, where black-tableclothed tables, midcentury-influenced brass chandeliers and cream-colored walls create a chic scene. It’s the perfect canvas for Timothy’s excellent food.

Together with his sous chef, William Mabry (formerly of Herbie’s and Yolklore), Metz has nailed the concept of fine dining fare that feels nostalgic without reading as dated. Their success lies in the execution. Escargot, for instance, does not reinvent the classic appetizer but embraces it; plump snails, tender yet with a firm, springy texture (if you’ve had mushy escargot, you know) are prepared simply in butter, garlic and parsley, allowing the flavor of the dish’s namesake to shine through in all of its earthy glory.

A first course of cheese dip is basically classic fondue, a luxurious mélange of gruyere, fontina and parmesan adorned with a swirl of hot sauce that made me want to bust out my mom’s 1970s-era pot and forks. Though a restrained person would have been happy simply dipping the accompanying griddled bread and Fuji apples into the concoction, I couldn’t resist giving the fontina tater tots I’d ordered as another appetizer a little dunk. Though really, the tots are enough even without a cheese-dip coating, thanks to their cloud-like interior and crunchy golden exterior.

The lobster pot-pie appetizer is satisfying enough both in taste and size to make a main course. The lobster and pea filling, flavored with tarragon and a hint of sherry to bring out the shellfish’s natural sweetness, is positively silken. Atop it rests a flaky piece of puff pastry that diners are encouraged to take off, then spoon the filling over it, adding buttery crunch to the decadent, bisque-like contents.

Timothy’s Caesar salad reminds you of why the dish is such a classic. Here, Metz and his team expertly grill hunks of romaine just enough to pick up delicious smoky char without losing the green’s firm texture. The lettuce is adorned with creamy dressing, its anchovy-forward flavor balanced out with a generous amount of lemon. Shaved parmesan cheese and crouton add additional richness and crunch, and piquant drop peppers provide a burst of refreshment. 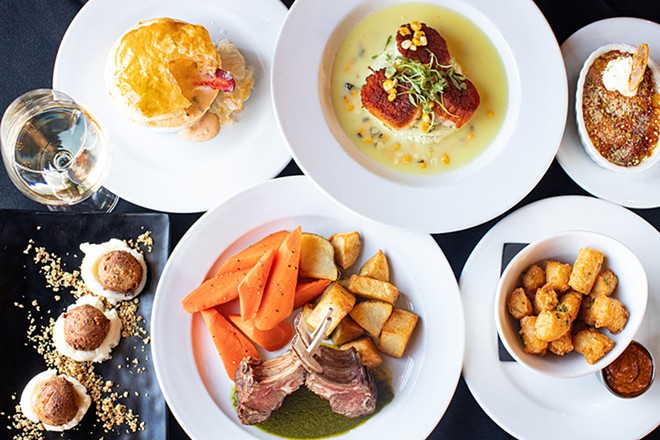 Entrees, too, are beautifully executed. A filet of sirloin was prepared to a spot-on medium-rare and served alongside butter-basted asparagus and garlic mashed potatoes. Hollandaise, enriched with lobster meat, was drizzled over both the steak and the vegetable; my only complaint is that I wished I was served an entire gravy boat of the mouthwatering sauce so I could smother the plate with it. That prowess with the grill was also evident on the lamb chops, which were prepared to a perfect medium-rare and tender enough to cut with a butter knife. The meat was so mild flavored, I eschewed the accompanying chimichurri to enjoy it on its own.

Timothy’s scallops are some of the largest I’ve seen served in a restaurant, but their heft is only part of their allure. The sweet, tender shellfish were masterfully seared so that the top and bottom, dusted in smoked paprika, had a wonderful browned crust while the interior was as soft as butter. The scallops were served in a bowl with delicate turmeric corn broth and kernels of griddled corn, as well as edamame mash, that paired smartly with the other components.

Though it is difficult to save room for sweets at Timothy’s — especially when you order the restaurant’s impossibly decadent lobster mac and cheese as a side dish with your entrees — it is worth the effort. Carrot-cake fritters are like a cross between a cake pop without the stick and a haute doughnut hole, resting atop rich cream-cheese frosting. However, the stunner was an off-the-menu special of an apple-pie cream puff. The round, light-as-air crust was served half opened like a clamshell, then overfilled with luxurious pastry cream. Walnuts, apple butter and caramel covered the puff, giving it the feel of a high-end apple pie. Hopefully, this will end up in the restaurant’s regular rotation.

Between that cream puff and the lobster pot pie, I’d made a flaky mess of the table, which is why I was so thankful to see that crumber. With just the flick of her wrist, our excellent server was able to make the cloth as clean as when I’d arrived — a little bit of magic, and a nod to a classic way of eating that Timothy’s has beautifully brought to life.