A new Somali restaurant shines against its industrial-wasteland backdrop 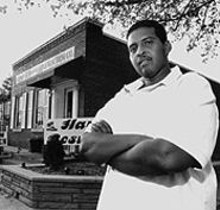 It is a dark and blustery night. Steve and Sticks and I are careening down Vandeventer in the luxury sedan Sticks got in the divorce. We're looking to strap on the feedbag at a new Somali restaurant that, the scuttlebutt alleges, is wedged between some warehouses somewhere near Tower Grove. Or Boyle. Or Sarah. OK, I don't know exactly where. I don't know the name of the place, either. But we Posey-Smiths didn't get where we are today by ignoring scuttlebutt. Like fake fingernails, we press on.

"Just keep driving," I urge Sticks. "It's gotta be around here somewhere."

This neighborhood at 8 o'clock in the evening has an eerie, nuclear-holocaust look about it. A little farther down, Manchester and Chouteau and Vandeventer will tangle up at Midtown's epicenter of dissipation -- White Castle -- but here, all is quiet. Too quiet. No cars, no people, just leaves and old newspapers swirling in the gusts. A bleak, barren place for a restaurant. I sense that Steve and Sticks are losing faith in my scuttlebutt. They suspect that maybe we took a wrong turn.

Another block whooshes by. I'm about to file this particular restaurant rumor in the "bum steers" folder when, right across from Advance Tool & Die, a tidy brick edifice shimmers into view. With its colonial appurtenances, neat blue awning and bright floodlights, it shines against the backdrop of steel-gray industry like a swan in a swamp. A plastic banner announces Hayat's Restaurant: "Now Open."

"Hah -- there it is! Turn! Turn!" I am vindicated. I am also relieved. Steve has been telling a fairly offensive story about his antic nasal emissions, and I want out of the car. Besides, I'm starvin' like Marvin.

The wind blows us in from the abandoned street, and we find ourselves in a clean, well-lighted place. It smells faintly of cloves. Of cozy dimension and modestly appointed, the room has been freshly painted in white and lichen-green. Surreal airbrushed paintings of waves crashing on craggy shores hang on the wall. On each of the nine or 10 bare tables is a glass vase with a tiny flower. From behind a folding screen we hear steamy sizzles and quiet chatter in a language we don't understand. We are alone except for a large sullen man, sipping a glass of water, who ignores us completely. He stares as if in a trance at the large TV burbling in the corner. It's showing that commercial where the Grim Reaper skips around a meadow rescuing baby birds to the tune of "What a Day for a Daydream."

"My favorite commercial!" Sticks is aglow with approbation. Hayat's proprietor, an indomitably gracious chap named Hassan, emerges from behind the screen. Welcoming us like old school chums, he ushers us to a table adjacent to the sullen man. He produces one menu. Sometime later, a second menu appears. Then two glasses of water. Eventually a third water arrives, but the last menu never does. This conspicuously low-velocity approach, executed with the utmost cordiality, will characterize the rest of the meal. A second visit will confirm my suspicion: The pacing here is definitely of the deliberate school. Our host, it seems, is refreshingly devoid of Type A hangups.

None of us has ever been to Somalia, so we have no idea what exotic delights await us in the way of comestibles. The comma-shaped Somali Republic hugs the eastern borders of Kenya and Ethiopia on one side and juts out into the Indian Ocean on the other. A couple hundred miles of water separate it from Yemen. Weighing this geographical information, I cleverly speculate that even if we don't encounter a Somali version of injera (Ethiopian flatbread), we're bound to meet up with a lentil or two.

My speculations are inaccurate. Hayat's is about as chock-full of lentils as White Castle. In fact, they actually serve burgers. And other American staples: tuna salad, and omelettes, and bagels. But we aren't looking for bagels. Where are the exotic delights?

Sticks, ever the vigilant vegetarian, discovers one in a dish of foul mudammas, a stewlike preparation of fava beans, onion and garlic. Presented on a plate with a half-loaf of French bread, it is an unusual and delicious amalgam of flavors that my Western palate cannot fully fathom. An effluence of orange-tinted oil suggests that Hayat's kitchen does not skimp on the fat.

Sticks has also spotted bananas in the side-order section and asks for some. Eyeing her with mild surprise, our host informs us that Americans usually eschew the humble banana as a side dish, although it is a Somali favorite. He regrets that, in any event, he is fresh out of 'em.

The menu claims that Hayat's Somali selections are "similar to Middle Eastern with a special touch." But before we proceed, a small disclaimer: I do not possess the slightest expertise in the culinary disciplines of the Middle East. Beyond the combination platter No. 3 at Saleem's, Cafe Natasha's lamb chops and the incidental bite of falafel while visiting some distant metropolis, I'm pretty much a greenhorn. So you can take it with a grain of sumac when I propose that the aforementioned "special touch" is heat.

Steve is the first to yelp. His sukaar sandwich, a sort of stir-fry of chicken and bell pepper stuffed into a hunk of French bread with tomato, has yielded incontrovertible evidence of a chile presence. This is a happy development. The chile adeptly complements the other seasonings, resulting in as compelling a situation as you can hope for in a sandwich.

Chile is the trend. Amid the bell pepper and tomatoes in my chicken curry (a dish the restaurant also makes with beef), I detect slices of the same fiery orange pepper. Also in evidence are whole cloves and cardamom pods, placing the dish firmly in the exotic-delights category. Except for a huge mound of wonderful curry-scented rice, it doesn't differ appreciably from the filling in Steve's sandwich, which suits me fine.

The beef kebabs are more challenging. Leathery flakes of flank steak the size of sand dollars appear to have been pan-fried rather than skewered and broiled. Though the piquant marinade with bits of sweet tomato is tasty, it leaves a copious oily red residue on the plate. Much more to our liking is a dish of spaghetti, which they are happy to prepare without meat. It looks like a typical red-sauced Italian version, but a melange of provocative, distinctly non-Italian spices and chunky vegetables is an unexpected surprise. Our only complaint is that there is not enough of this appealing sauce for the generous helping of noodles.

We are also enchanted by a ubiquitous dipping sauce that accompanies nearly everything we order. The color of a light Cajun roux, it adds a sweet heat and new level of intrigue to anything we dunk in it. But stay away from the soup. It's Campbell's Chicken Noodle, or I'll eat my Hayat.