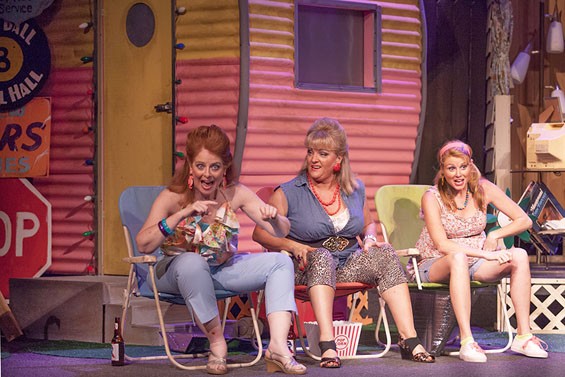 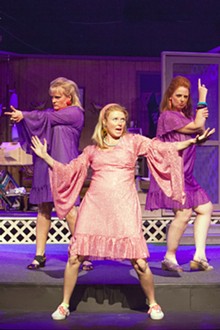 The Great American Trailer Park Musical
Through August 18 at the Tower Grove Abbey, 2336 Tennessee Avenue.
Tickets are $20 ($18 for students and seniors).
Call 314-865-1995 or visit www.straydogtheater.com.

At the end of an ambitious season that has included the Who's Tommy and the complete Angels in America saga, Stray Dog Theatre is blowing off steam with the niche show, The Great American Trailer Park Musical, which is maybe the gol' darndest hoot and a howl we've seen around these parts since 2006, when HotCity staged Daddy's Dyin' (Who's Got the Will?), another script dedicated to the theory that everyone who lives south of the Mason-Dixon Line is a beer guzzlin', crotch scratchin', good-neighbor whorin' moron. Stupid people shore is funny, ain't they?

This time the locale has moved from Texas to Florida. The escapades play out at Armadillo Acres, a trailer park supervised by three women who, in a brazen act of petty larceny, seem to have been stolen directly from Little Shop of Horrors. The good folks who concocted this celebration of all things crass don't seem to have a single original idea in their heads — apart, that is, from the sure knowledge that the word "slut" always will elicit knee-jerk peals of laughter.

On opening night the packed, rapt audience responded to these high jinks with raucous gusto. It turns out that audiences are kinda like water: They seek their own level. In this same Stray Dog auditorium, I have seen audiences be uplifted by Thornton Wilder's inspiring Our Town and hold its collective breath at Tennessee Williams' breathless Suddenly Last Summer. Now viewers are screaming back at a show that screams at them.

The Great American Trailer Park Musical is certainly a catchy title. There are just two caveats: The show's not great, and it's not musical. Oh, there are plenty of brassy songs, mostly sung at a fever pitch, but try to hum one the next morning. Great American has two decibel levels: loud and louder, both of which are pumped through an overamplified sound system. Even though the actors were only twenty feet away, their voices always seemed to be coming from the opposite side of the stage. That was kinda surreal.

Of course, we all like to let our hair down once in a while. From time to time The Great American Trailer Park Musical even delights in having its characters drop their drawers, which is good for a yuck or three. So, go. Enjoy it. But as you walk back to your car after the performance, don't be surprised if you find yourself thinking, "Gee, I could write a musical." 

Jump to comments
« Pirates! is the Muny's greatest treasure of the season   |   All Hail the King: The Muny dishes up a royal treat with the King and I »