Tyler Perry's mammy gets less melodramatic but not less grotesque 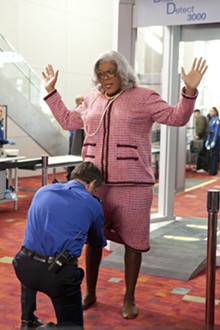 Tyler Perry's mammy gets less melodramatic but not less grotesque

For many, especially black people who see in her a mockery of our own grandmothers, Tyler Perry's Madea is little more than a mammy — an insult to the matriarchal community figure that Perry claims to celebrate. And unforgivably, when compared to Flip Wilson's Geraldine or even Martin Lawrence's Big Momma, his black-men-in-drag-for-comic-effect peers, Perry's Madea — that crass, violent, ignorant, bizarrely asexual depiction of a black Southern woman that he insists is based on women he has actually known — simply isn't funny.

Yet it's clear that millions see no historical pain in Madea and even find her hilarious. The six films in the series have broken box office records, and the seventh, Madea's Witness Protection, coming Friday, seems poised to do the same. Few characters have appeared in so many films, and all of these movies have featured strong black casts, including esteemed actors as Cicely Tyson, Angela Bassett and Loretta Devine.

Until recently, Perry's core moviegoing audience had been the people who love the Perry plays that Madea movies have been based on, and the people who love the people who love those plays. But that's changing. Madea's Witness Protection is decidedly not like the others in the series: It is the first not based on a play and the first to co-star white actors, namely straight-to-DVD king and queen Eugene Levy and Denise Richards. Witness is no revised urban theater-circuit melodrama. It's instead a comedy in which a beloved character has an adventure, like Ernest Goes to Camp.

Yet the first half-dozen films are not about Madea at all, and their repetitious stories can feel something like a round of black-pathology Mad Libs. In each, an untrusting woman damaged by past abuse — often from a well-to-do man — is forced to come into her own and along the way meets a handsome blue-collar man whom she is not at first open to (Diary of a Mad Black Woman, Madea's Family Reunion, Meet the Browns). She has been raped (Madea's Family Reunion, Madea Goes to Jail), emotionally abused (Diary of a Mad Black Woman, Meet the Browns, I Can Do Bad All by Myself) or has had her children neglected by an uncaring baby daddy (Meet the Browns). This long-suffering "good man" wants her no matter how many children she has, or whether she's on drugs, or how poorly she treats him (Madea's Family Reunion, Diary of a Mad Black Woman, I Can Do Bad All by Myself, Meet the Browns, Madea Goes to Jail).

In the end, the woman learns that in order for anyone else to love her, she must love herself and that she can only do so through the powers of Christian forgiveness. Each also teaches that the educated and wealthy are irredeemably evil — and that black women are angry.

That's why the first installment, Diary of a Mad Black Woman, uses the word "mad" not to indicate insanity but anger. It's why, in that same movie, Madea rips apart the clothes of the new woman in her granddaughter's estranged husband's life and then destroys the husband's home with a chainsaw while exclaiming, "This is for all the black women who have been done wrong by a man!" It's why, in Madea's Family Reunion, the best of the series, another mad black woman throws hot grits on her abusive fiancé — a nod to a real-life horror endured by Al Green — before beating him with a frying pan.

This violence comes at Madea's suggestion and is presented as an act of triumph. Madea's brutality can be funny when it's a pop-culture joke, such as when she declares that she was the first person to shoot Tupac: "We was arguing over a parking place. I didn't kill him, though. No, that wasn't me." But is it the occasional inspired bit that has made Madea a star? Is it Perry's repetitious storytelling and ugly view of class in black America? Or is it just his bizarre, recycled take on Mammy?

A six-foot-five-inch black grandmother with cartoonish breasts, a lopsided wig, and a wardrobe that could double as a collection of shower curtains, Madea is the latest version of a stereotype so ingrained in the American consciousness that it's hard to see at first what Perry brings to it that's new. But there is a complicating layer of ridiculousness: She has a decades-long criminal record, admits that she used to be a stripper, eschews religion, and carries a gun in her purse. Like the classic mammy, she is a caregiver, but she also doles out verbal threats and punches.

It's unlikely that these traits existed in any black elder Perry or anyone else has ever known, especially because over the run of the series, Madea's actions have increasingly defied physics and logic, resulting in less purely stereotypical slapstick comedy. By Madea Goes to Jail (2009), Perry was drawing easy laughs from the silliness of this authority-defying old woman acting violently enough to be put behind bars, where more than a few gags were cribbed directly from Dr. Evil's prison stint in Austin Powers in Goldmember. Jail wallows in another Mad Libs–style secondary plot with Keshia Knight Pulliam (Rudy from The Cosby Show) as the hooker with a heart of gold and Oscar nominee Viola Davis as her Christian counselor. But it was the first Madea film with Madea herself as the protagonist. Cameos by Dr. Phil and the cast of The View rounded out the mainstream appeal of what is more a comedy with a melodramatic thread than a melodrama that uses Madea for comic relief — perhaps why Madea Goes to Jail had the largest opening weekend of any film in the series. Can Madea's Witness Protection do even better than that? Someone is certainly counting on it.

This time, Madea is holding her own in a fully mainstream film that seems more akin to 2003's Bringing Down the House, starring Queen Latifah and Steve Martin, than to any previous Madea movie. Like Bringing, Witness Protection caters to the racial anxieties of audiences by presenting skittish white people who are loosened up by a black character who is also out of place in a new element — in other words, a "culture clash comedy." In that sense, Witness is more of the same, but for sparing us his twisted fantasy of black sorrow, it might be the biggest favor Perry has done for black film in years.

Perry continues to do no kindness to the image that many black Americans prefer to retain of their grandmothers, one that Madea erodes with every "hallelujer." It's also nerve-wracking to realize that a rehashed mammy has been reappropriated for mainstream consumption...that is, until one realizes that Madea movies and the mammy image itself have been quietly mainstream all along. Don't be fooled: Madea is still as violent and angry as ever, but as a caricature, not as a sympathetic character. In this way, Madea's Witness Protection breaks no new real ground, but at the very least will leave black miserablism by the wayside.

Jump to comments
« In Safety Not Guaranteed and Lola Versus, love doesn't mean an insult to the audience's intelligence   |   The spider becomes a man and a joy in The Amazing Spider-Man »