Maggie Gyllenhaal's a naughty Secretary but not quite naughty enough 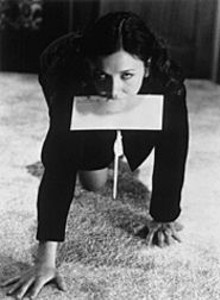 Lee Holloway (Maggie Gyllenhaal) is released from a mental institution, but after one afternoon with her warring parents and shrew of a sister, she's ready to return. Instead, she renews her favorite pastime -- self-mutilation -- and finds a job as a secretary in a one-man law firm, where her typing errors are punished by Mr. Grey (James Spader) with spankings and verbal bullying. Lee is in heaven. The problem comes when Grey suddenly starts to pull back. Director Steven Shainberg (Hit Me) and screenwriter Erin Cressida Wilson undoubtedly intended their black comedy to be both romantic and unnerving. Instead, it is slow-moving and dull. "The pain inside has to come to the surface, and when you watch it heal it proves comforting," Grey remarks when he catches Lee cutting herself -- it's too bad the film wasn't interested in pursuing that psychological thread. The judges at this year's Sundance Film Festival didn't seem to mind. They awarded the picture a Special Jury Prize for Originality.