Un-Hitched: In the House takes the thriller apart to build it anew 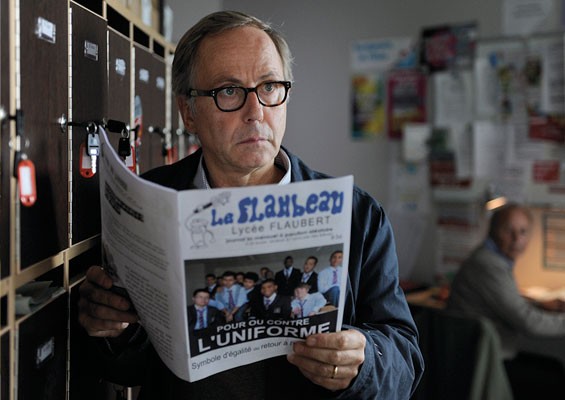 Un-Hitched: In the House takes the thriller apart to build it anew

The supreme testament to Hitchcock is that no matter how many years pass, his work exerts an ever-stronger influence. Just last month came Park Chan-Wook's reimagining of Shadow of a Doubt, Stoker, and last year Anthony Hopkins did Hitchcock as a Hitchcock character in Hitchcock — and let's not forget the Psycho TV prequel Bates Motel. Or that last year's Sight & Sound poll named Vertigo the greatest film ever made. Hitch's influence is obviously international — Claude Chabrol was dubbed the "French Hitchcock," and with Chabrol deceased, François Ozon looks likely to assume the mantle. Yet Ozon's latest, In the House, seems to qualify the title: How about the New French Hitchcock, Postmodern Division?

A charming display of auto-critique, In the House is a cocktail of one part Shadow of a Doubt, one part Rear Window, and two parts Jacques Derrida: It's not so much a thriller as a playful deconstruction thereof, with a structure that enables its characters to comment on their roles in the narrative. Most of the commentary comes from Germain (Fabrice Luchini), the sort of teacher who remarks, when admonished for pessimism, "I read Schopenhauer all summer." Germain teaches literature at a suburban French high school, where his students might be characterized as barely sentient. In his portrait of a generic suburb in a globalized world, Ozon gives us an awfully American-seeming France, where dads eat pizza and watch basketball with their sons while obsessing over the economic might of China.

Yet to Germain's delight, one student, Claude (Ernst Umhauer), has a gift for storytelling. There's just one problem: Claude's writings detail his increasingly creepy involvement with that NBA-watching family, his friend Rapha's (Bastien Ughetto). Claude spies on Rapha's gorgeous mom (Emmanuelle Seigner) and as his behavior approaches stalking, Germain thrills at Claude's account of it, urging him to proceed with his story — and, by proxy, his behavior toward Rapha's family. "It lacks a conflict," Germain tells Claude, sounding like an exasperated filmmaker. "Think about Scheherazade — if you bore me, I'll cut off your head!"

In the House creates something far more original than the same old heart-pounding exercise. Germain's meta-narrative commentary ensures an alienating effect, not unrelated to Brecht, and therein lies the refreshing uniqueness: since Hitchcock's films are perpetually analyzed by film theorists the world over, why not provide the space for such analysis within a thriller itself? As the narrative gamesmanship ramps up — Germain becomes the audience's surrogate and advocate, demanding more conflict; Claude begins to criticize Germain's criticism from within the stories themselves — we realize the dynamic playing out is as much audience vs. filmmaker as it is writer vs. director. In the House is a mystery, but it investigates a far tougher riddle than what makes Claude tick — it's trying to figure out why, exactly, voyeurism and mystery delight us so. In the process, it delights. 

In the House (Dans la maison) is not showing in any theaters in the area.

Jump to comments
« Expand or Die: For At Any Price director Ramin Bahrani, bigger films demand bigger targets   |   Steven Soderbergh's Behind the Candelabra is a Delightful Little Curio »