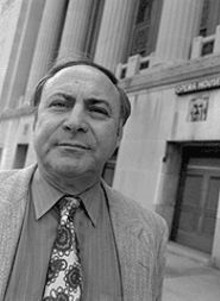 Even before the age of voice mail and fax machines, Ed Golterman did not hesitate to make his annoyances known. For example, when the touring company of Les Misérables came to the Fox Theatre in 1989, Golterman provided a list of "negative stats" to the Post-Dispatch: "123 measurable audience coughs and 14 measurable sneezes during Act I and 119 measurable coughs and 24 measurable sneezes during Act II." "Measurable" is defined as "loud enough to pull your attention from the performance," although "nose blowing is not included because a muffling device, like Kleenex, limits the sound."

Whether gods or devils may be found in the details, Golterman can be found there as well. When the P-D gave the date of the building of the Muny as 1918, Golterman supplied them with a correction, 1917.

Whatever may or may not be done with Kiel Opera House, the renovation of which has been Golterman's unwavering two-year crusade, there should be space for an archive of letters, faxes and voice messages Golterman has sent to media and political and business leaders. Mention his name, and most of those who have encountered him roll their eyes or refer to "that crazy man." If pugnacity is a virtue, he will be among the saints. He has the incessant drive of a fullback, as his square build implies, and in his speech there is no hint of doubt or uncertainty. He's confident in his righteous appeal, and once he has someone's ear, he begins to exhibit a sly conspiratorial grin.

Golterman possesses the thin skin of the noble classes, to which, in terms of the performing arts in this city, he has some claim through blood right: "My grandfather (Guy Golterman) was a contracts attorney that helped give us the Coliseum in 1910. He brought Caruso and the Met here. It was a very successful stop for the Met. Then he was instrumental in building the Muny, and he dedicated it with Aida in 1917. Then he and (then-Mayor) Henry Kiel and others gave us the Opera House, and he brought the world's greatest opera stars to the Kiel in the '30s."

Ed Golterman's father worked as an administrative assistant to four St. Louis mayors. His mother was a noted soprano who sometimes sang at the Opera House. His reminiscences of the former performing-arts center are akin to the description of a shrine: "You did not need to overamplify. You could hear pure voice. You could hear pure instrument. You could hear an orchestra without all the amplification. So you heard wonderful sound, and you were close.

"It had a huge stage. I remember the orchestra pit rising with the musicians on it -- that was very thrilling. I graduated there. It seemed to me people were at peace there."

Growing up in a musical family, Golterman developed a pleasing baritone of his own, performing in St. Louis with groups such as the Ed Golterman Trio and, most notably, singing the national anthem before Blues games for 21 years, from the team's inception in 1967 until 1988. He must have been a memorable opener, for as recently as 1997, during one of the Blues' dull spots, the Post's Bernie Miklasz suggested bringing Golterman back: "He can get the crowd going."

Despite his deep ancestral roots, Golterman took a hiatus from the city and lived in Washington, D.C., for two years. He's made his living "in the marketing and training communications field for years. I've had my own company. I've served as a consultant. I write, produce and direct marketing and training films and videos. I've worked for Monsanto, Shell, Anheuser, etc. Before that, I was in radio and television, news and sports, and I've always been involved in theater and in music."

In D.C., Golterman frequented beyond-the-Beltway piano bars, especially La Canard in Vienna, Va. "La Canard was a joy. There were 20-30 people in there who would all sing, and none of them were professionals. They all had a great time. The camaraderie -- what live music does is pretty well unmatched by any other experience."

In 1995 he joined the Elden Street Players' production of Sweeney Todd, playing Judge Turpin, the character on whom Sweeney vows vengeance for the rape of his wife. In a Washington Post review, Golterman's portrayal received the accolade "piously sadistic."

Meanwhile, back in St. Louis, the Kiel Center Partners, who offered to renovate the Opera House as part of a deal with the city for the demolition of the old Kiel Auditorium, reneged on that promise, arguing that the $2.5 million they had spent on "stabilizing" the facility was all they were really required to do. Unluckily for them, Golterman's East Coast fling was coming to an end.

When Golterman returned in 1998, he was alarmed to find the monument to his ancestors endangered. "I, like others, thought it was going to open when they said they were going to reopen it. I came back, and I looked at the lineup of something called the Urban Land Institute Task Force. I saw 26 of the people on there who were absolute enemies of the Kiel Opera House and would want it gone. These were people from Grand Center, the Fox, their attorneys, their PR people, board members and Kiel Partners and Civic Progress. I saw a stacked deck against the Opera House, terribly stacked.

"They were heading to destroying it or bastardizing it or turning it into anything but what it is. I got going with a small group; we began attending these Urban Land Institute meetings, began telling the other side of the story, that this is an asset. And I believe this group marshaled enough influence to stop that study in its tracks."

For two years, Golterman has been tireless in his crusade but, in the process, has managed to alienate as many parties as he has drawn to his cause. A professional marketer, he reveals no taste for diplomacy. Name-calling is not beneath him. Mark Sauer, of Kiel Partners, and David Fay, formerly of Fox Associates, he called "bastards" and challenged to a boxing match. He referred to the perceived alliance of St. Louis 2004, the Regional Chamber and Growth Association, Kiel Partners and NationsBank (now Bank of America) a "death squad."

Golterman admits his own ego has been involved in his mission. In his 20-page synopsis of the opportunities for Kiel Opera House, the wish list for a restoration- and operating-management team includes Ed Golterman at the very top. In a "commentary" he delivered to the RFT, Golterman describes a future in which the veil is lifted from the eyes of Bill and Nancy Laurie (the new owners of Kiel Opera House): "They will see benefits for all, especially the people of St. Louis. They will assure city officials that this can be done and will be done at great benefit to the city, with no undo burden. And they will go before the people and announce that the Kiel Opera House is placed in the hands of Ed Golterman."

Yet Golterman also possesses the quality of self-effacement. At the end of the document, he includes a two-sentence bio, noting his distinct lineage and then adding, "(Golterman) is also proclaimed by others as a complete pain in the ass."

During an interview with the RFT, Golterman reveals both his good humor and his lack of political grace. When asked about the concerns voiced by Dance St. Louis executive director Sally Bliss -- that there is a lack of money and a lack of political will to get Kiel Opera House open -- he dismisses her as a novice: "I don't think Sally has any business talking about cost or money or anything else. We're not asking for Sally's money. I'm not even asking for Civic Progress' money. I think that other investors, new investors, would open this if given a chance, and I'm just asking the city to say, 'We want this done.'

"The city should be taking the lead in this, but for Sally to be a spokesman about the economics of all this is inappropriate. She can talk about dance."

Such displays alienated Golterman from the very organization he founded, Kiel for Performing Arts Inc. In December 1999, he left the group, claiming the organization had "lost its will and courage." Members of the organization feared that Golterman's tactics were more offensive that progressive.

Finally, on March 6, a new addition came to the Golterman fax pile, the announcement that he had given up the Kiel Opera House cause to "work toward development of a quality musical dinner theater in St. Louis County."

How could Quixote abandon his Dulcinea? "A couple of factors, positive and negative. I think the positive factor is a very stated awareness of, a desire to increase tourism in this Central County area -- that's been stated by the Chambers of Commerce, by the hotel and motel people. They're getting some bus-tour business accidentally from people going to and from Branson. I'm saying a classy dinner theater out here will bring more of those bus tours to the St. Louis area. You have that and Stages working together.

The recent Arts Forecast 2000, an open discussion of St. Louis arts administrators at Powell Hall in which a call for greater regional arts marketing was extolled, dispirited Golterman, as well. "That our arts leaders could think that the best thing they could do now is do a brochure. That kind of blew me away."

Now he's pitching the blue-plate Man of La Mancha special. "Meal/show combination is very, very attractive, especially for seniors during the day on their travels. It's working in other areas. There are three or four in Kansas City. There are four or five in the Washington, D.C., area. They're an attraction when you can combine the two. The meal and the show -- to me, they both have to be good.

That one windmill, however, is not far from his mind. "I'm not breaking with Kiel in any way," he emphasizes. When the fools see the errors of their ways, he says, "I'm available to them as a consultant."