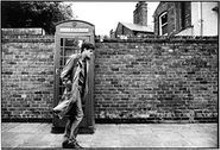 Rock films come in two forms. The first is the concert/documentary variety, the best of which dynamically pinpoint a band's musical moment within the context of its era: the Maysles Brothers and Charlotte Zwerin chronicling the Stones in Gimme Shelter, Martin Scorsese celebrating the Band in The Last Waltz. Then you have the biopic, with all its maddening imitations. Whether it's Gus Van Sant trying to articulate slackerdom through stasis in Last Days or Taylor Hackford steamrolling Ray Charles with Behind the Music inanities in Ray, cinematic reworkings of performers' lives invariably feel insufficient because they try to impose motives and significance onto popular music, thereby squeezing the juice out of an art form that thrives on spontaneous, elemental release.

For the most part, Control, a biopic portrait of doomed Joy Division frontman Ian Curtis, escapes these limitations, which is a credit to director Anton Corbijn. One of rock's preeminent photographers, Corbijn specializes in an instantly mythologizing black-and-white style that bestows gravitas on his subjects without sacrificing their essential cool. Though he sometimes stumbles navigating his feature debut's admittedly conventional narrative, Control gets closer to approximating music's emotional essence than its more literal rock-bio counterparts. By not wasting time convincing us of Curtis' tortured genius, the movie is free to become the cinematic equivalent of the band's songs: melancholy but vibrant, bleak but never unbearable.

Covering roughly the last eight years of Curtis' life, Control discovers English teen Ian (Sam Riley) as he stumbles through a typically aimless pubescence in early '70s Manchester, discovering women while obsessing over his David Bowie records. Marrying his girlfriend Debbie (a regrettably underused Samantha Morton) at nineteen, he then meets some blokes needing a lead singer for their band. You don't need to know Joy Division's history to surmise the rest: Early struggles for Ian and the lads lead to burgeoning success, which leads to personal setbacks (epilepsy, depression), which leads to tragedy in the form of Curtis' 1980 suicide on the eve of the band's first American tour.

Cinematographer Martin Ruhe's pared-down black-and-white visuals achieve the exact opposite effect of his director's king-making photography. Like in Christopher Munch's The Hours and Times, an imaginary rendering of a secret romantic weekend between John Lennon and Beatles manager Brian Epstein, Control's naturalistic approach gives its legendary pop-music subject human proportions. The monochromatic look also serves a journalistic function, as Corbijn observes Curtis with an objective eye and never tries to "solve" the mystery of what led to his suicide. Indeed, Control runs aground when it mimics the rock-bio tendencies of movies like Walk the Line, clumsily illustrating creative inspiration in dumbed-down terms (Ian and the missus are having problems? Presto: He writes "Love Will Tear Us Apart.") and treating women as either pretty and supportive or hot and problematic. But Corbijn is adept at capturing the atmosphere of a nascent band figuring out its sound and image. Musical legacies and cultural significance are blessedly ignored; the film's casual tone instead creates a series of exciting small discoveries as if the band's (and specifically Curtis') history is blossoming right before our eyes.

Based on Curtis' wife's memoir, Touching from a Distance, and adapted by screenwriter Matt Greenhalgh, the film wisely leaves Curtis' inner life oblique, and is helped immensely by cherubic newcomer Riley. Much like Val Kilmer's excellent turn as Jim Morrison in The Doors, Riley doesn't just resemble his subject, but also channels his slowly crumbling psyche, resulting in a characterization that feels appropriately uncertain and under-formed. Control never lets you forget that Curtis was only 23 when he took his own life. Years of romantic eulogizing about his troubled soul and dark lyrics have elevated his mystique, but the Ian we see is a well-meaning work in progress, a perpetually flailing little boy sensitive enough not to want to hurt his loving wife and young child but too immature to avoid an affair with part-time journalist Annik Honoré (Alexandra Maria Lara).

Nearing his death, Curtis withdrew from his band and family, and at this stage Control struggles to keep a firm grasp on its gloomy ghost. With an unknowable sorrow, Curtis never could have imagined that almost 30 years after his death anyone would bother making a film about what he perceived as his miserable existence. Control honors its subject's eternal self-doubt by honing in on that truth and leaving the legend to others.