Unreal FIXes a hangover, tries out for Mensa and attempts to pick up a pickup artist 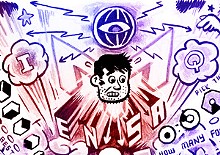 Unreal generally subscribes to the (Groucho) Marxist theory of club-joining: We would not want to belong to any club that would have us as a member. Particularly if membership requires taking a test. But we make an exception for Mensa, the society for people with high IQs. Of course we know we're smarter than everybody else, but how awesome would it be to have verifiable proof? And maybe to be able to flash the official Mensa credit card?

Mensa, as everyone intelligent enough to access the organization's Web site knows, is Latin for "table," a metaphorical table at which people of all nationalities, races and creeds can gather, provided they can prove their IQs are in the top 2 percent of the population.

That's where the test comes in and why, on a recent Friday night, we find ourselves searching frantically for a place to turn around on Lindbergh Boulevard because we missed the turnoff for the St. Louis Airport Crowne Plaza. Will this act of stupidity disqualify us from membership?

Why does Mensa have to have its test on Friday night anyway, we wonder peevishly; is it because the organizers assume that smart people don't have lives?

"No, that's not true," says St. Louis-area Mensa spokeswoman Lin Leinicke. "That weekend is our annual group party at the Crowne Plaza, and we thought it would be an easy thing to do on Friday night, less intrusive than a Saturday or a weeknight."

Whatever. At least we're on time.

Seventeen of us take the test. The youngest, a high schooler, brings along her mom for moral support. The oldest is well into senior citizenry. Curiously, there are two couples. (Unreal fantasizes that only one half of each couple gets in, thus breaking up two relationships and creating a third.)

Our proctor, Bob Smith (not a pseudonym, we don't think), has been administering Mensa tests twice a year since 1989. Sadly, he tells us, this will be our one and only chance to audition — because there's only one version of the test. On the bright side, Mensa test-takers are self-selecting, so 70 percent of us are likely to make it.

Even better news: This stuff's easier than the SAT. One test even had pictures.

Until we hear back about our results, we're invited to participate in all local Mensa activities. Though the science-fiction discussion group was canceled, the two happy hours this week are on. Unreal is so there! 

A Kick in the Headache
Ever since we test-drove the Spaloo bidet attachment, Unreal has been waiting for a six-figure offer to come our way from Consumer Reports. Instead the postman brings a box o' FIX Strips, a "revolutionary" hangover remedy from Tulsa-based Cooley Nutraceuticals.

Following the instructions, we place four "scientifically formulated" strips betwixt cheek and gum. First impression: FIX smells like puked-up Flintstones vitamins. A little discouraging. But ostensibly, "When placed in the cellular lining of the cheek (the buccal mucosa), FIX delivers elements to the circulation system directly."

What elements might those be? Caffeine, chiefly. Embarking upon a five-star case of the jits, we give Cooley Nutraceuticals a jingle. Not surprisingly, 38-year-old company president Clay Cooley picks up.

Unreal: I'm sampling your invention as we speak, and — ewww! — some of it just got on my tongue.

Clay Cooley: It's not going to win any culinary awards, but did the shot of tequila taste good last night? Hell no! Did it do the job?

So I take FIX like it's a wad of chew?

If you take it the buccal way, the absorption rate is 80 percent.

The last person I heard use the word "buccal" was at the dentist. What's your background?

Tell us about the mother of all hangovers.

I was at a buddy's pool, hanging out in the middle of summer. I thought, "Man, I'm tired of feeling like I've been hit in the head by a bag full of rocks." I started out with a handful of different B vitamins, vitamin C, aspirin. At one point I had seven pills in my hand and a Gatorade.

Can your chemists do anything about the taste?

I won't hold it against you if you want to go get a drink of water. In less than six weeks, we're coming out with a mint flavor. You can't even taste the vitamins at all.

Are there other uses for FIX?

A lot of the college kids take these things because it hits you ten times faster than Red Bull. 

The Pickup Artist at Twilight
Unreal first stumbled across Eric Weber's 1975 classic How to Pick Up Girls in its audio incarnation on the Internet (of course). In our favorite selection, "Women's Clothing Store Pick-Up," a young man named Frank enlists an attractive female fellow shopper to help him buy a blouse as a gift for his sister. Naturally, the sister is nonexistent, the blouse is see-through and the woman, instead of being repulsed, accepts Frank's offer of a drink and the blouse.

What sort of mind could possibly concoct such a plan, we wondered. And does Weber still get away with such antics today?

Turns out Weber lives in Tenafly, New Jersey, and you can find his digits in the phone book, which eliminates some of the fun of the game.

Our opener: "Is this Eric Weber? The author of How to Pick Up Girls?" (We figure a pickup artist would respond best to flattery.)

"I never actually tried all those pickups," he goes on. "Though I did pick up my wife in a singles bar."

"It was 1965. It was very crowded, and she was trying to get past. She said, 'Excuse me,' and I didn't move. I said, 'You're too pretty for me to let you get away.' I thought she would vomit or hit me. But she didn't. She was very young and innocent. I told her New York was a tough town, and we got to talking. We'll be married 40 years on March 3. So I know that worked."

Here we can't resist telling Weber we particularly admired the art-museum pickup. In that one, Hank gets the girl and learns a little about art.

"Why are you reporters always looking for goodness?" Weber complains. "Why do people have to learn things? Men are really interested in meeting women and having sex. It consumes them. I feel for people who are shy. Now, if you want to make fun of me—"

"Well," he says, "I write serious fiction now. I write from the perspective of someone who feels inferior and inadequate. I know how injured people feel."

"A few years ago, I wrote and directed a movie, Second Best. Joe Pantoliano was in it, and Jennifer Tilly. It played at Sundance. You can get it on Netflix. If you really want to talk to me, you should watch it, and then call me back."

"I'll tell you what," he says. "I'll give you my cell number. That way you can always find me."