Vacancies: Lanford Wilson explains how actors can fill in the spaces of Hot l Baltimore 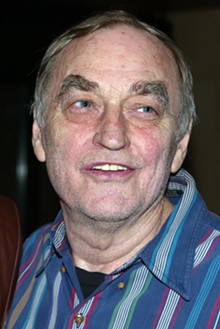 Vacancies: Lanford Wilson explains how actors can fill in the spaces of Hot l Baltimore

Lanford Wilson came to prominence in 1973 with The Hot l Baltimore, a character-driven tale of misfits living in a derelict hotel. The quirky comedy, which played off-Broadway for more than two years, was so successful that it spawned a Norman Lear-produced TV sitcom even while the original play was still running. Although Wilson had nothing to do with the series ("They didn't want me, and I didn't want anything to do with it," the playwright told me in 1979), he was glad for the television exposure. "The series helped the play into its long run," Wilson explained. The play's weekly break-even point was $8,000; prior to the TV series, Baltimore was averaging $9,000. After the series was announced, and throughout its five-month run in 1975, weekly revenues shot up to $15,000. "After the show was canceled," Wilson said, "we gradually came down a little bit, but never to where we had been."

During the mid-'70s Wilson attended many of the Baltimore stagings at regional theaters throughout the country. "The Chicago production was God-awful," he said. "That really put me in my place. Then Marshall [Mason, the play's original director] and I went out to the Mark Taper Forum in Los Angeles, where we had these incredible actors — much more talented, I thought, than the original off-Broadway cast. In a 750-seat house, we staged what we thought was the definitive production of Hot l. The actors really 'sold' the play, and the Mark Taper had all the money in the world to spend, so it was just perfect.

"Then I came back to our shabby little production in Greenwich Village, and I sneaked in — they didn't know I was there — and Judd Hirsch and Trish Hawkins began to perform the opening scene at the switchboard in the hotel lobby. And I'm saying to myself, 'God, they're amateurs. They're not making their points. They're not delivering lines. It's like they're saying any goddamn thing that comes into their heads.' And I thought to myself: 'Well, it'll get better when Helen Stenborg makes her entrance, because Helen is a pro.' So Helen came down the stairs into the lobby. She looked exhausted. She wasn't listening to what was being said to her. And I thought: 'Well, the play never really starts until April [played by Conchata Ferrell] arrives.'

"April comes on. Slop, slop, slop, and the audience is laughing. But in California the girl sat down with great grace and aplomb and delivered her line, and the audience fell apart. Conchata Ferrell sat down like if she stood on those fat legs one minute longer, she would collapse. She sat down like she had to sit down. She said a funny line, but she dribbled it onto the floor like she didn't know it was funny."

Wilson continues, "It took me about ten minutes more of the shock of hearing these actors say anything that came into their heads — because it never occurred to me that I had written these lines — to realize that this was the greatest theater experience I had ever had in my life. The actors were only geniuses, right? Two days later Marshall flew back from LA and had the exact same experience. Sneaked in and called me the next morning and said, 'Lanford, I've had the best theater experience of my life.' I said, 'You saw Hot l last night, didn't you?'"

In the intervening decades, rather like the locale in which it is set, The Hot l Baltimore has fallen into decline. Then earlier this year, almost concurrent with Wilson's death in March, the play received major productions in both Chicago and Los Angeles. Neither staging was embraced by the critics. Next week Baltimore begins a rare two-week run at the Webster Conservatory. Wilson may no longer be with us, but if he were, surely he would encourage the Webster students not to "act" his play. Rather, they should simply inhabit the characters and let the story unfold. It seems to work best that way.

Jump to comments
« Parallel Porking: You don't need a permit to see How I Learned to Drive, but you'd best buckle up   |   The Dork at the Top of the Stairs: The Last Night of Ballyhoo manages only a flicker of illumination before lights-out »