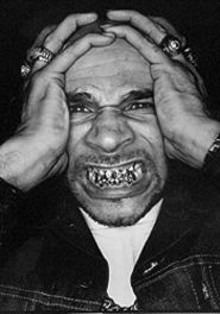 The first thing you should know is that Goldie is an ARTIST. He is very important. Don't be surprised if, after he tires of making drum & bass, he becomes a superstar actor, or sculptor, or painter -- because he's not just a musician. He must be taken very seriously. What he does is IMPORTANT. GOLDIE IS IMPORTANT.

So say the indulgent liner notes to INCredible: Sound of Drum "n' Bass Mixed by Goldie, notes that paint the Artist Currently Known as Goldie as not just a genius artist but as a Golden Boy, perhaps the Second Coming.

But anyone who was forced to sit through the excruciating "classical" work "Mother" on Goldie's most recent studio album, Saturnz Return, understands quite clearly that he's not Jesus II. The grand, hourlong lead zeppelin was self-indulgent drivel, and it exploded above the runway.

On the other hand, nothing's more commendable than grand failure; it's more impressive to crash and burn than it is to sit and watch, and Goldie's importance stems from the truth that back in 1992 and '93 he was cocky enough to help forge the sound of drum & bass (or jungle; the two styles are interchangeable), the menacing bump-and-step amalgam of breakbeat, hardcore techno, hip-hop, dub and whatnot.

Proof positive of his importance is INCredible (curiously, Goldie thinks he has the clout to trademark the word "incredible"), an authoritative glimpse at the British drum & bass scene of the '90s. And there is no better double-disc representation of the seeds of the movement, and of one strain of its progression, than this (an equally impressive glimpse is the seminal V Classics, which came out a few years back).

Goldie was at the heart of a school of drum & bass that would eventually take centerstage; it was he -- along with 4Hero, Grooverider and Doc Scott, all represented on this mix -- who infused dynamics into the seeds of the genre and who gave the music a texture that was absent in the in-yer-face barrage of the earliest music.

The heart of all jungle is, as the genre's name implies, drum and bass. The most overtly synthetic of all of electronic dance music, jungle's commonalities are its stutter-step, full-force snare snaps, some of which are generated at a breakneck 200 beats per minute, and an underlying low-end bass that moves in half- or quarter-time and most closely resembles the deep sound of Jamaican dub. On INCredible, the minute differences between each song's drum beat and bass melody reveal themselves more fully than they would if one was listening to single cuts in a vacuum; hearing all the cuts lined in a row helps the novice understand the language.

Inevitable, though glaring, omissions aside (Photek being the most obvious), the success of the package stems from the simple truth of Goldie's good taste (his mixing skills are at times embarrassing, though); on landmark, transcendent jams like Alex Reece's "Pulp Fiction," Source Direct's "Sculptures Hide" and pretty much anything by Doc Scott, the rush is palpable, and at a loud volume rolling down Delmar there's no better music on the planet.

Most important, though, the importance of INCredible stems from the simple fact that many of these gems have been only available to DJs on 12-inch singles or as high-priced imports; Goldie succeeds because he's an authority, and he's got cachet, and the combination of the two results in a double-disc package that is great as a toe-in-the-water temperature test or as a swan dive into the bliss of drum & bass.