Eric Bogosian shakes us awake with his entertaining rants 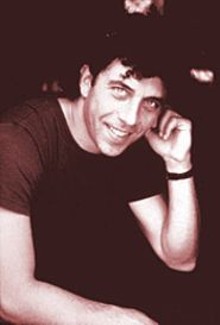 Wake Up and Smell the Coffee

Performed by Eric Bogosian as part of the Ovations! Series

Writer/actor Eric Bogosian begins his solo performance Wake Up and Smell the Coffee with an impassioned, breathless, hysterically entertaining rant. It's the theatrical equivalent of a concert pianist's sauntering onstage and diving into a flawless rendition of the "Sonata Pathétique" -- no setup, no easing in, just pure pell-mell paranoia as his character crouches in a chair under a tight spotlight, only occasionally changing position to launch a fresh assault. He's having bad thoughts, lots of them, more than you can count, and he's helpless yet emboldened with every fresh revelation. "If you thwart them and repress them," he says, "it causes CANCER!"

Why is this so funny when, if we'd been hearing the same from a mumbling mendicant in rags on the street, we'd walk a little more briskly? Why do we laugh at the patronizing and pathetic "recovering male" whose 12-step-inflected monologue reveals the loneliness of the long-distance wanker? Why do we nod in agreement at the artist who refuses to create because anything he does is a copy and thereby co-optable? Perhaps it's because Bogosian is a gladiator in the arena where the profane meets the profound. His solo performances (this is his sixth solo show and the first to be presented in St. Louis) are designed to prompt (uneasy) laughter and (reluctant) recognition. This show, deftly directed by Jo Bonney and written by Bogosian, is a triumph and perhaps the most cohesive thematically of his solo work.

This isn't acting -- Bogosian briefly inhabits these losers by combining actorly technique and a standup comic's precision. The monologues don't supply punchlines so much as build layers on a ziggurat of absurdity, vanity and pretension. His voice is a flexible baritone that can swing from the aphasic pauses of the surfer dude to the clipped and nasal bromides of the traveling salaryman dad, reaching out to touch members of his family on his cell phone while protecting his place in line. As for raw ugliness, there's less here than in earlier shows, when a character might describe a typically jolly night out with his buds that is gradually revealed to be an epic of Visigothic mayhem and violence. Yet what continues to make Bogosian's work so startling is his willingness to explore the interior lives of the folks many theatergoers might dismiss as boneheaded philistines. He doesn't humanize these sullen losers so much as present them unadorned and unabashed, something no one else was doing when he started and no one does nowhere near as well as he does now. You can still imagine the 47-year-old opening for some sullen punk band (as he used to) and getting howls of approval.

But he has moved on. Wake Up's characters don't come from the seamy underside of life so much as the steamy underside of showbiz or the middle and upper-middle class. A lengthy vignette commences with that comic staple, plane travel. First there's the aforementioned aggrieved traveler, thwarted by an unctuous clerk: "You can win, sir. You just can't win today." Next, an ambitiously priapic bloke chats up a stewardess; he's followed by the captain, announcing imminent disaster; then we come back to the ambitious guy who craves fame and decides to survive the plane crash (because it'll make a great movie, of course). This ends with a monologue delivered by an aged and intemperate producer, all stoop-shouldered walk and gravelly boasts. What's remarkable about Wake Up is the precision with which each character is rendered -- Bogosian transforms himself with accents and gesture instantly, fearlessly and totally.

Jump to comments
The Bondage of Matrimony »