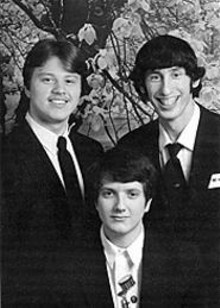 Is St. Louis really the world's largest small town, or can it simply claim a particularly tightly knit music community? This past summer, at a backyard barbecue peopled by some of the South Side's best-known bands, one partygoer regaled the others with the legend of Walt Winston. Winston, a St. Louis native with a moptop, an out-of-tune electric guitar and a serious John Lennon fetish, had recorded a tape full of uncanny '64-era-Beatles pastiches that had found its way into the hands of the storyteller. Struck by the similarities, another musician spun his own version of the tale: Some time ago, while his band was recording in a local studio, the engineer told them about a former client -- a three-piece group called the Waltles. Then, the engineer played them a safety copy of "Autumn Leaves," a two-minute apocalypse of irresistible melodies, Beatlesque harmonies and erratic rhythms. Back at the barbecue, the legends began to fly: Walt was from Washington, Mo. Walt was from Lemay. Walt took his assumed last name from John Lennon's middle name. Walt really believed he was John Lennon. Walt died while serving in the Navy. The bass player from the Waltles was Walt's uncle. The Waltles booked only one hour of studio time because they wanted to record a 45-minute album. Meanwhile, the man behind all this myth and speculation was several thousands of miles away in Northern California, pursuing his parallel careers as a radio announcer, an independent record company operator and -- yes -- a Waltle.

Walt Winston was born Walter Gaal on Dec. 26, 1964, in St. Louis. "We all grew up dirt poor; we hardly had much of anything," says Walt of his childhood. The effects of his father's alcoholism would be wryly noted in a future song lyric: "I was born and raised in a tavern." If his home life was far from ideal, high school was no improvement: "Here I was, growing up dirt poor in South St. Louis, and then suddenly my family moved to Lemay. People made it known throughout my years in high school that I didn't belong there, but I was determined that nobody was going to run me out of town."

The young Walt dabbled in a number of things -- acting in an oral-hygiene film, serving in the Navy, working as a security guard -- but, like his siblings (his brother Dave was a member of the '80s metal band Ax Minister, and his sister Linda is a well-known solo performer), he also nurtured a passion for music. "The music was an outlet, especially when I was in high school," Walt explains. "I was a total outcast with very few friends. I was bullied constantly, but in music, you didn't have to be the biggest or the strongest. If I had a guitar in my hand, I could fit in anywhere."

To support his extracurricular activities (and put himself through broadcasting school), he took a job at the old Billie Goat Hill Saloon. It was here that his Lennonesque alter ego was born: "I was sweeping the floor at about 3:30 in the morning when I came across a red thing whizzing by my feet," Walt recalls. "That pack of Winston cigarettes changed my life." Happening upon a pack of smokes that shared John Lennon's middle name was too good a bit of synchronicity for Walt to resist, apparently.

Walt Winston recorded his first demos (since lost) in 1983, but his first public release was the All I Do (Is Daydream) vinyl EP in 1985, released in a run of 500 copies on Premier Records. Three of the four songs from this EP were re-recorded for his full-length 1988 release I'm Sailing Away. The 12 songs on this album (released as a cassette on Walt's own Blue Boat Records in a limited edition of 100 copies) perfectly encapsulate the Walt Winston legend; catchy, touching and sometimes funny, it's the sound of a man alone in the studio, relying on both the influences he wears on his sleeve and his inherent quirkiness.

The title track is a stark, simple ballad consisting of a single lead vocal and a skeletal acoustic guitar accompaniment broken only by the unexpected intrusion of a seagull sound effect on the choruses. "Please Help Me Understand" is haunting, a bittersweet pop song with soaring harmonies and piano bass accents. "Growing up in a dysfunctional family like I did, it gives you a creative edge to the music," Walt says. "When I came up with 'Help Me Understand,' that's where a lot of those memories came from -- not really understanding the situation as it's happening." The autobiographical content becomes unmistakable on the poignant "St. Louis Schoolboy," on which Winston name-checks Billie Goat Hill (albeit in an incongruous Liverpudlian accent). "If people really wanted to get to know me, that would be the song to listen to," Walt admits.

Throughout I'm Sailing Away, pure pop melodies clash with poorly tuned direct-inject rhythm guitar; exquisite harmonies submit to tentative, arrhythmic stabs at various drums ("I'm well aware that I'm no drummer," Walt says). But if Winston's musical talents could still use some polishing, at least he was highly efficient: "Nothing on that album took any more than two or three takes," he boasts. "Nine of the 12 songs were knocked out in one take!" This is not "outsider music" in the tradition of the Shaggs or Wesley Willis, wherein a lack of talent is grist for a hipster's inside joke. Walt Winston has talent, and he is aware of his talent's limits. More important, he's never deterred by these limits. "People can say what they want; they can say, 'Walt can't play,' and, to a point, they're right -- Walt can't play some things," he remarks. "It's not what you have but how you use it."

Walt formed bands with such names as Walt Winston and the Cigarettes, Zenith, Blue Street and the Noteles until he finally stumbled upon that perfect and appropriate pun: the Waltles. Rhythm sections came and went (including a drummer with the unforgettable stage name of Bongo McCray), but eventually the group coalesced around the talents of Winston, bassist/guitarist Chris Noblin ("This guy had the ability to pick the strings with his teeth, and he even did it onstage!" Walt exclaims) and drummer Scott Eastabrook (the son of Winston's then-girlfriend Judy Bunny -- this may be the origin of the "Walt's uncle played bass" story). The Waltles began performing live, opening for such local luminaries as Big Ass Truck, Swing Set and the Boorays.

The Waltles made their recording debut in 1993 with the album Knock at My Door. The drumming was far more accomplished than what Walt was able to supply on his solo effort, and for the first time a bass guitar filled out the sound. Despite these advances, there was still an off-kilter feel to the performance as the band raced to get the results committed to magnetic tape in record time. Walt quashes the one-album-in-one-hour rumor: "At that time, studio time was $65 an hour. If I bought it one hour at a time, I could afford it that way, so I thought, 'OK, I'll just do this new album one track at a time." The album's title track was a popular favorite at the Waltles' live performances, and the local band Sun Sawed in 1/2 covered "Autumn Leaves," albeit as an unreleased -- and tongue-in-cheek -- outtake.

Walt Winston left St. Louis in the '90s to pursue his radio-news career in various markets (including stations in North Carolina and Alaska) and has since formed a new edition of the Waltles in Greenfield, Calif., where he lives with his wife and son. He's recorded three additional solo albums (Walkin' Down the Highway, Paper People and Black Upon Black) and even compiled an anthology titled 20 Years of Memories. Recent songs include "A Little Birdie Told Me", a post-Columbine condemnation of school violence, and "Wanted!", which Walt describes as having "a James Bond flavor." A new Waltles album featuring lead guitarist James Vincent and drummer Pat Lampo, called They're at Your Door!, is forthcoming.

Walt has started his own cottage industry in the form of Walteria Records; a glance around its web site (www.walteriarecords.com) reveals the same winsome mix of ambition and innocence found in his music. In addition to CD-R reissues of all the Waltles and Walt Winston solo recordings, Walteria Records offers the audio novel Rainbow Jack ("a vigilante serial killer who kills criminals that have escaped the justice system ... administering his own brand of justice!"), subscriptions to Waltazine and the serialized radio program Homer the Wonderdog ("an animated character in the theatre of radio").

No elitist, Walt Winston wants to reach a large audience. He feels that his songs are something that the whole family can enjoy ("if you've got music you can play in front of your mother or grandmother, that's quality music") and that anybody can -- and should -- emulate ("if Walt Winston can do it, so can I"). But first and foremost, Walt makes music that tells a story: "Every song is a story about something that I've encountered or something I've witnessed. People write diaries, people write books, people write manuscripts ... my way of recording history and recording time is music. That's my way of putting together a life story." May his story be long in the telling.