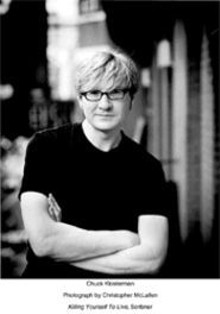 "There are some journalists who interview people, say Marilyn Manson, and then they'll go, 'Oh, I've met Marilyn Manson; I know Marilyn Manson,'" says Chuck Klosterman. "But they didn't. They just interviewed him. They spent twenty minutes with him when he was advertising his record."

That statement would shoot down our whole reason for getting into journalism in the first place if we took any stock in it. Fortunately we don't, so we're jazzed that our new friend Klosterman, who we now, like, know really well, is coming to town to visit and read from his latest, thirdest book, Killing Yourself to Live: 85% of a True Story.

Klosterman has previously mused on such topics as hair metal, The Sims, Saved by the Bell and, yes, breakfast cereals in 2001's Fargo Rock City and 2003's Sex, Drugs and Cocoa Puffs. But in Killing Yourself, a 6,557-mile, 21-day, 119-corpse, 600-CD travelogue/memoir, he turns a shade more serious, exploring love, loneliness and the significance of rock-star deaths. And with his book's publication, the 33-year-old farmboy-turned-Manhattanite (he's a columnist for Esquire, even) further cements his persona as the less-introverted, funnier Dave Eggers for a generation of post-ironic pop-culture connoisseurs simultaneously inspired by and insanely jealous of his burgeoning literary super-status.

"Five years ago, nobody cared what I did; nobody asked me anything," he says. "Everything is so weird now that I feel like I'm going insane with these reviews and all these interviews going on."

Too bad these other interviewers all want to ask him the same four questions. Klosterman lists them as "How did you come up with the idea for this, what did I learn about the meaning of death and celebrity, which of the three girls I ended up with at the end of the book, and then they usually ask me about my life being so different now because I'm from North Dakota."

Well shoot, that kills the rest of our interview right there. So let's say that Klosterman, who estimates that he's only outselling Harry Potter and the Half-Blood Prince in the meager former-Mötley-Crüe-fans-who-think-too-much-about-ex-girlfriends demographic, scores himself a lasting legacy as an influential writer by kicking the bucket tomorrow. At around, say, noonish. What's his ideal ticket to enter the big concert hall in the sky? "Political assassination," he answers. "It would mean that you've done something in your life and somebody hated you enough that they thought the world would be better without you. The way to get in that position is usually to do something of consequence. So yeah, it'll probably never happen for me."

Hop aboard the Chuck wagon at 7 p.m. at Left Bank Books (399 North Euclid Avenue) on Thursday, August 4. And the price? Oh, it's free as the wind blows, free as the grass grows; free-fallin' like a free bird (see, we can make myoozikal references, too). For more information call 314-367-6731, visit www.left-bank.com or just ask us. 'Cause we totally always know exactly what our best bud Chuck is up to.