White Rabbits heads to the garage with Milk Famous 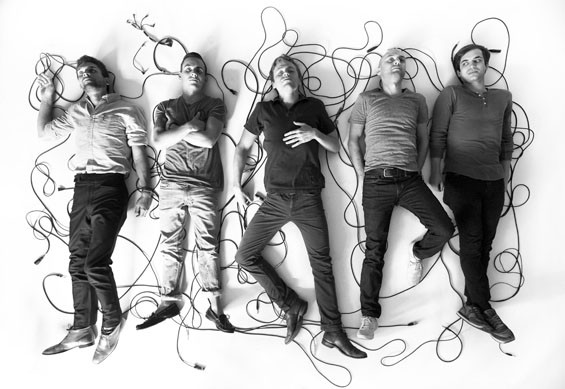 White Rabbits returns to its home state in support of its most subtle record to date.

White Rabbits heads to the garage with Milk Famous

White Rabbits formed in Columbia; two of its members grew up in Webster Groves. But all that was forever ago. It's been five years since the band moved to New York, and the three records it has released seem to span several lifetimes of evolution. Relatively early success meant we watched White Rabbits the whole time, through the apocalyptic Calypso of Fort Nightly and the confident rock & roll of the Britt Daniel-produced It's Frightening. And last month Milk Famous, album No. 3, arrived. This time the sextet's sinewy array of drums and guitars moves in strange directions through eleven tracks. If It's Frightening was the tank division, then Milk Famous is guerillas in the jungle. We spoke with guitarist Alex Even just after the record's release about the edge of sanity, expectations and suburbia.

Kiernan Maletsky: You've been working on this album for a couple years now, right?

It went by so quickly. I'm two years older now.

Are you looking forward to being back on the road consistently?

Yeah. I have fun playing with these guys. And hopefully we can maintain our sanity throughout the whole thing.

That seems to be a theme of your music: barely clinging onto sanity.

So it's not just the music.

What's going on in your life now that's got you at the edge of sanity?

"Strange" is an interesting word. What makes it strange instead of frustrating or whatever?

Mostly because I'm so wedded to the actual process of making these songs that it seems weird that people would think that they know what we should sound like. We're just making songs that we like in a room. We put them out for people. It's a private process that we choose to make public, and people have all sorts of expectations about it. That's strange to me, considering they don't know me personally.

You obviously have roots in Missouri. Do you still feel like these are sort of homecoming shows when you play in St. Louis or Columbia? Or has enough time passed where it's just another town where you happen to know more people in the crowd?

It's not necessarily "home," but they're definitely different shows. Shows in Missouri are always different-feeling than when we play anywhere else. Ten or fifteen family members show up and all of these friends from the past that you haven't seen in forever. And everybody wants to sort of catch up. It feels more like a high school reunion.

I feel like Missouri shows are fun, but they're also kind of stressful for us. We feel like we have to live up to people's standards. We want to play really well. But we've been in New York long enough now that I consider it my home. I still have lots of friends and family in Missouri, but I don't get much time to hang out there.

Was suburbia a topic you guys were thinking about while working on Milk Famous? It's Frightening feels like a city record for some reason, and Milk Famous sounds more to me like it's dealing with a particular mindset you find in the suburbs.

I don't think we set out to make that sort of commentary. But I certainly think maybe some of the stuff we do could be interpreted that way.

How do you feel about the suburbs as opposed to cities? Where did you grow up?

I grew up in Jefferson City. So not necessarily suburbs but just sort of small town America.

When we were recording Milk Famous, we moved to Austin for three months. We all lived in this little house, and it had a garage. On the weekends we would take a couple days off from the studio, set up instruments in the garage, open the door and just play pretty loosely. It was the first and only time White Rabbits has been a suburban garage band. And it was a super pleasant experience. I remember thinking, "You can't really do this in New York."

I don't know. I don't like driving, so living somewhere without mass transit seems daunting to me.

Are there specific things you can point to on this record and say, "Oh yeah, that's something we never would have done if we were confined to our practice space in New York"?

The song on the record "Danny Come Inside," we had been working on that song for a while. It had become this five-minute-long journey from the beginning of the song to the end, and we got to Austin and thought, "I don't know if this is really working." So we kept putting it off and putting it off.

One of those weekends we got together in the garage and decided, "All right, the only thing we really like about this song is the outro. Let's just see if we can make the song out of that." And we sort of jammed it out in the garage, and we recorded it the next day.

This album is the one that's the most tightly constructed; it seems like there's a lot of really precise lines and entrances. There are all these polyrhythms and crap like that. Is that a product of playing together for so long?

Not necessarily. It's so hard to do that particular thing live, as a band. But at the time, we were interested in the idea of music editing software being played as if it were an instrument. For instance, to go back to "Danny Come Inside," we basically just laid down ten minutes of Steve [Patterson] and Jamie [Levinson] and Matt [Clark] playing drums together and then laid down a bass track, and then I played through a completely improvised take on the guitar. And then we just completely deconstructed it and moved things around, put the ending of the song at the beginning and bumped things up the way the normal, rational mind of a player wouldn't intuitively know how to do in the moment.

Are you playing different arrangements live or have you taken pains to figure out how to replicate that?

As we were rehearsing for this tour I think we were really interested in seeing how close we could get to re-creating the record live. I think we're three shows in now, and we're reaching the point where we're sort of over that. We're starting to want to let the songs breathe a little bit.

Are they taking on a different character as a result of that?

They're still close to the record. Earlier we were talking about how those changes happen, and usually it starts with little improvised things. I think that's sort of where we are.

It will be interesting to see how that has evolved by the time you get out here.

I'm sure it will be absolutely different.

Is there anything else you'd like people to know?

Well, I have a joke that I haven't told anybody. I guess I can start here: God, I just really object when people say we sound just like Spoon. Because we have plenty of songs that sound exactly like Cold War Kids.

So there you have it. That's my joke.