Who Grew? Spring Awakening charts the gulf between youth and adulthood — in song 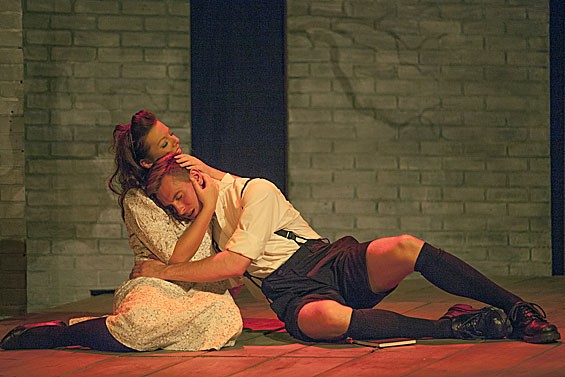 Who Grew? Spring Awakening charts the gulf between youth and adulthood — in song

Based on a 19th-century play by Frank Wedekind, the production follows the lives of Melchior (Zach Wachter) and Moritz (Ryan Foizey), two German schoolboys on the cusp of manhood. Melchior is intelligent and thoughtful, practically an adult already; Moritz has the nervous disposition of a small dog, a boy seemingly afraid of taking the next step, whatever that step might be. He's haunted by erotic dreams and fears he's going insane. When worldly Melchior writes an informative (and illustrated) essay on human sexuality for his friend's benefit, he sets in motion a chain of events that alters both of their lives, as well as that of their childhood friend Wendla (Melissa Southmayd).

Wachter has a strong and clear singing voice, but the calm maturity with which he portrays Melchior sometimes makes him appear above all the emotional and physical turmoil his friends suffer. That lovely singing voice is quite the performance-enhancer, however; as Melchior and Wendla realize that their dormant childhood friendship is being rekindled as romance, the pair performs a beautiful duet, "The Word of Your Body." Southmayd almost glows when she sings to Wachter of her burgeoning heart, and he reciprocates. Lighting designer Tyler Duenow gives the moment a wonderful punch, as a series of dangling light bulbs flicker on like waking stars as Melchior finally reaches out to touch Wendla.

It's Foizey's turn as Moritz that delivers the gut punch of the evening. His frantic dancing and brittle-voiced singing paint a clear picture of a teen at the mercy of his changing body. When he confesses to his father (Keith Thompson, who performs all the adult-male roles with pompous humor) that he has flunked out of school, the lanky Foizey cowers into himself so that the shorter Thompson appears to tower over him. But even when someone else is singing, you can't take your eyes off Moritz. His outcast peer Ilse (Anna Skidis) sings of her own loneliness in "Blue Wind" — and, it must be noted, Skidis owns the song as if it was written just for her — while Moritz agonizes over the final decision he'll ever make. With a hidden gun in his coat weighing him down, his head broken to one side, his face a rictus of fear and isolation, Foizey captures the tragedy of Moritz in form alone. If only he could manage the delicate leap across the little gap between himself and Ilse, he'd be saved.

Spring Awakening boasts a number of such sublime moments, and Been's staging rewards the viewer who pays heed to everyone in each scene. The performance also features one of the more evocative house bands you'll enjoy this fall. Musical director Chris Petersen marshals his forces — keyboard, guitar, drums, bass, violin, cello and viola — with well-modulated volume and a dashing sense for composer Sheik's rhythms. In German, one would praise these musicians for their ability to play mit Schwung, i.e., with a certain attitude or strong emotion. In Spring Awakening, you'll know it when you hear it.