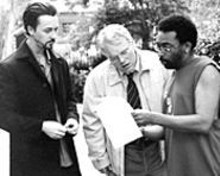 Spike Lee's adaptation of David Benioff's 2001 novel The 25th Hour hews closely to the original tale, which the author has adapted in screenplay form: Montgomery Brogan, a working-class white boy who dreamed of being a New York City firefighter until he fell into the soft pile of easy money made from peddling heroin, has a single day of freedom left until he must report to the upstate penitentiary to serve seven years. He will spend his final 24 hours of liberty partying, glumly and perhaps a bit too forcedly, with childhood chums Jakob Elinsky (Philip Seymour Hoffman), an English teacher who craves a decidedly unvirginal student named Mary (Anna Paquin); and Wall Street trader Francis Slaughtery (Barry Pepper), a would-be "master of the universe." Monty will say his farewells to his father -- a Staten Island bar owner who would do anything for his kid -- and to his girlfriend, Naturelle (Rosario Dawson), whom Monty fell in love with when she was a high-school student and, in his final moments of freedom, now suspects of turning him in.

Benioff's novel, now retitled simply 25th Hour, remains intact down to its final moments, as momentarily shocking as they are overwhelmingly sad; whole scenes from it have been cut and pasted into the screenplay. But the writer and the film's director, who was too long ago written off as the wunderkind who no longer could, have expanded one man's story into something far weightier without allowing it to collapse beneath its fresh burden. Monty Brogan, played by Edward Norton like a man accepting of his fate but never quite resigned to it, remains, but we're now reminded that even as he prepares for his last day of independence, we're stuck on the outside and forced to reckon with a new day's rising beneath a shadow of gloom, paranoia and terror.

25th Hour now, in large part, tells the story of New York City after September 11, 2001, when thus far Hollywood has been glib and tentative about dealing with 9/11; the dream factory won't own up to real-life nightmares. Everything until now has been didactic (the now-infamous West Wing episode) or pedantic (a Law & Order episode about a murder victim stashed in the ruins); only in documentaries, such as 9/11, have filmmakers been able to address the attacks and their repercussions. Lee does not flinch from the task; his heart aches for the hometown he loves, and he beckons those of us who observed from the safe distance of the television screen.

His intentions become clear before the opening credits finish their flashing: The camera, manned by Amores Perros and 8 Mile cinematographer Rodrigo Prieto, sweeps across the decimated Manhattan skyline, and our eyes fixate on the twin beams of light that emanate from where the World Trade Center once stood. The sight -- and sound of jazzman Terence Blanchard's elegant, mournful score -- is overwhelming, especially after a year spent watching cowardly filmmakers digitally erase the towers from their tepid movies. Later, Lee will even revisit territory first trod in Do the Right Thing: Monty, staring into a mirror upon which someone has scrawled "Fuck you," berates an entire city filled with Korean grocers, squeegee men, "black-hatted Hasidim," "uptown brothers" who never pass the ball and "terrorists in training" behind the wheels of taxicabs. He will even damn himself, like any good New Yorker filled with righteous self-contempt: "Fuck you, Montgomery Brogan. You fuckin' blew it."

Lee's constantly reminding us that for New Yorkers, the recent past is still very much a present that lingers over the city like a noxious cloud. "The New York Times says the air is bad down here," Jakob tells Francis, whose apartment overlooks the illuminated hole in the ground where the WTC once stood. "Fuck the Times," Post-reading Francis says, adding that he wouldn't move away even if "Bin Laden drops another one next door." If there's a flaw here, it's that their conversation is drowned out by the work below; we can't hear the workers, but we're distracted by their buzz of activity nonetheless. Lee and Prieto keep Ground Zero in the center of the screen; at times, everything and everyone else vanishes into the background.

Monty's story is slight, the last day of a dumbfuck's freedom; he's affable as hell, but the pusherman's gonna get what he deserves. Lee knows it, so he uses one small-time hustler to tell his tale of one wounded city. Those who'd damn him for doing so want Monty to stand for something, but he's essentially meaningless. The movie resonates precisely because it serves as documentary only pretending to be fiction: It's set in a real place recovering from real pain, which Lee makes tangible. As Monty walks the Manhattan streets, the camera lingers on makeshift memorials to fallen firefighters and WTC workers. The bar owned by Monty's pop (Brian Cox) is even populated by real-life members of FDNY's Rescue 5 unit. They toast old friends, as though life for them has become a perpetual wake. Because it has.