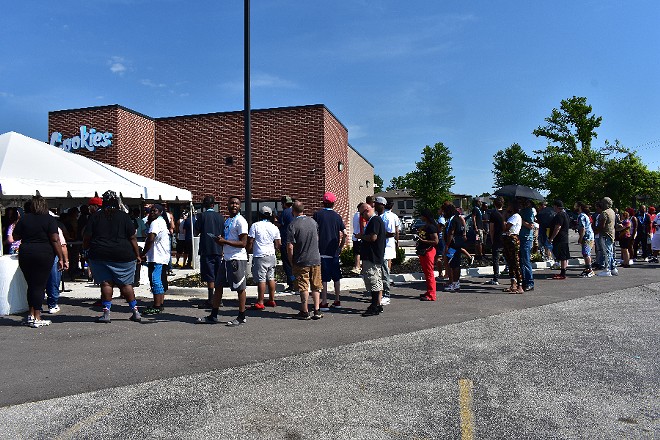 TOMMY CHIMS
The line of excited Cookies customers stretched around the building on Saturday.

Just two months after the popular cannabis company introduced its celebrated strains to the Missouri medical marijuana market through a partnership with Swade, Cookies has officially opened up its own dedicated dispensary in the St. Louis area.

With a big splash and considerable fanfare, the Bay Area-lifestyle brand turned purveyor of potent pot celebrated its grand opening in Florissant on Saturday with a ribbon-cutting ceremony and a block party featuring performances by several local rappers. A line was already wrapped around the building when the event kicked off at 10 a.m., and some customers had camped out in front of the store for days in advance.

Located at 11088 New Halls Ferry Road, the new dispensary is the first from Cookies in Missouri, and came about through a partnership with 3Fifteen Primo, which transformed its pre-existing Florissant location into the brand's flagship in the state. According to Jason Corrado, co-founder and CEO of 3Fifteen Primo, the transition started around the same time Cookies' strains first hit Missouri, when the brand reached out about a collaboration.

"They were excited about the location of the store and decided to work with our team," Corrado explains. "It came together nicely over two months." 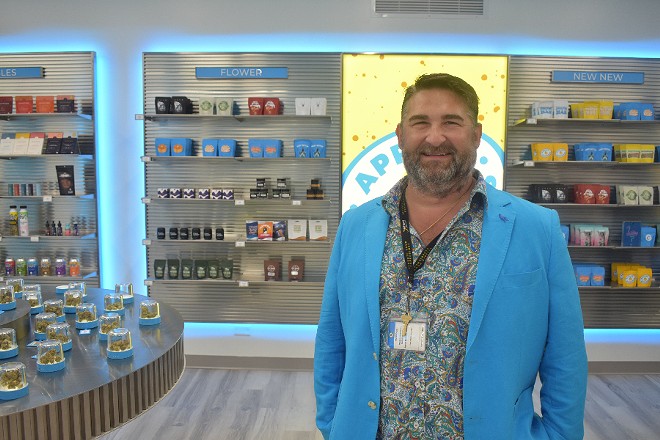 For Corrado and his partners, the opportunity to attach themselves to the popular brand was a no-brainer.

"It is a phenomenal, multinational, at this point, brand and probably the most recognized brand in cannabis," he says. "We wanted to attach ourselves to that dream. The people that we've been dealing with are fantastic, and really know how to — I mean, you see what we have here — they really know how to merchandise."

That know-how extends beyond the cannabis products. Cookies was originally founded in 2010 by Bay Area rapper Berner as a clothing and lifestyle store in San Francisco, whose oft-bright-blue, Cookies-branded apparel rapidly became popular among the streetwear set. In keeping, the new location has a good deal of St. Louis-specific clothing and other merchandise for sale alongside its cannabis wares. 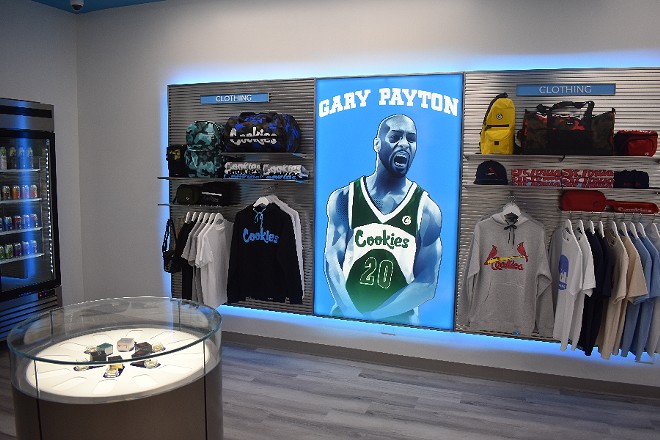 TOMMY CHIMS
Cookies got its start as a lifestyle brand, and its non-cannabis merchandise is still a big part of its appeal.

Many who showed up to Saturday's event were clearly already well aware of the fashion options the brand brings, and stood outside in the heat sporting clothing bearing the Cookies logo as they awaited their turn to enter the building. One young man named Kaeson, wearing a Cookies shirt, said anticipation had been building for months for the big day.

"At first they put the sign up, then they took it down and turned it into 3Fifteen for a little while," he explains. "Now they're actually opening, so I guess everybody's been waiting for a while. Like, the whole summer."

Another young man clad in a Cookies shirt traveled a considerable distance just for the chance to check the store out. Kenneth Fewell, 26, drove two hours from Springfield, Missouri, for the event. He'd heard about the event by watching a video stream of a popular weekly podcast, and was previously a fan of Berner's music through his collaborations with Wiz Khalifa.

"Actually, I was watching Million Dollaz Worth of Game, I seen that, so it let me know [Berner] was coming out here," Fewell explains. "Then just from like, a few years back I've been listening to his music anyway." 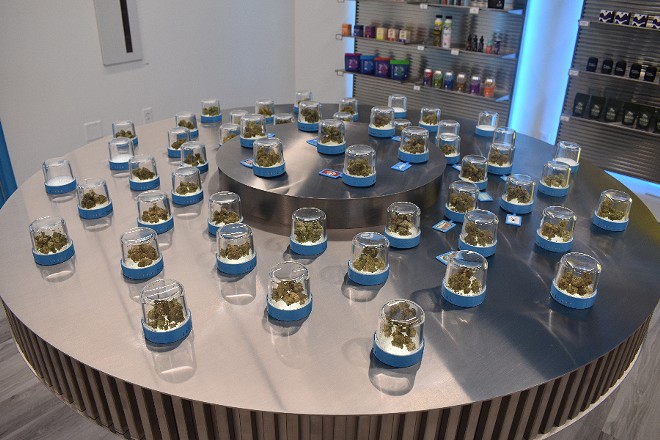 TOMMY CHIMS
Cookies' many strains are displayed in small jars for customers to examine.

Fewell wasn't yet sure what cannabis purchase he'd be making once he got inside, though he was intrigued by the brand's Cheetah Piss strain. Meanwhile he said he was just excited to peruse the wares.

"My cousin says they have some options, so I'm gonna go in and check 'em out," he explains.

Inside, the store was neatly organized and clean, with products lining the walls and a big lit-up sign depicting former professional basketball player Gary Payton, who lent his name to one of Cookies' more popular strains. That cultivar was on hand, of course, as well as pre-packs of Snow Man, Sticky Buns, the Soap, White Runtz, All Time High, Apples & Bananas, Blanco, Collins Ave., Emerald Cut, Georgia Pie, Helium, Jealousy, Lions Mane, Medellin, Pancakes, Pave and Red Velvet. In addition to the Cookies strains, the shop carries the usual fare from the likes of C4 and Flora Farms and many of the other brands available in dispensaries across the state, but those were obviously not the star of the show here.

I opted to purchase an eighth of the Gary Payton, due both to its stellar reputation and to the hypnotizing quality of the pro athlete's eyes on the store's interior signage. It cost me $56.84 after taxes and clocked in at 26.48 percent THC. 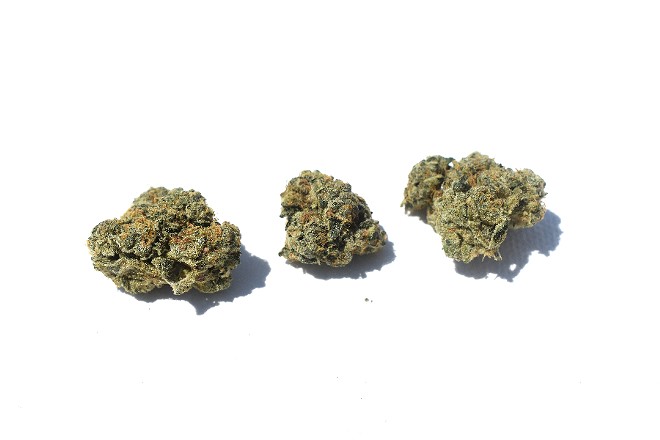 Upon opening the bag I was met with a powerful floral smell with peppery notes and a light citrus bite, in keeping with the fact that caryophyllene, limonene and linalool are the strain's dominant terpenes. On breakup, this stuff was exceptionally dense, almost like Play-Doh, and left my fingers pretty sticky — a grinder would definitely be the right move here. On inhale the taste was exquisite, with a pleasant spiciness on the back of my tongue that reminded me of a fine cigar. It was also exceptionally smooth, and I could rip my spoon pipe as hard as I wanted with no risk of coughing.

It was approximately 10,000 degrees outside on the day that I tried this strain out, so a companion and I headed to a friend's pool in a black car whose air conditioning didn't work. I melted into a sentient pile of goo and wet hair during the half-hour ride, but remarkably I wasn't concerned that my bones were reduced to a liquid state — I was just straight vibin', with not a care in the world. Gary Payton's reputation is that of an exceptionally balanced and relaxed high, and that reputation is decidedly well-earned. I found myself to be in a stellar mood, not too buzzy and not too zoned out, high as hell with no trace of anxiety, and energetic enough to hoist children over my head and chuck them into the depths of a backyard miniature sea for hours. It was probably one of the most even-keeled highs I've ever experienced and, in all, a complete success. 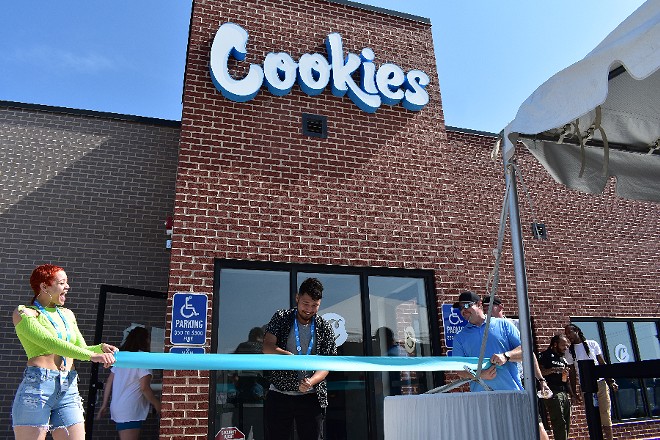 TOMMY CHIMS
Saturday's events kicked off with a ribbon-cutting ceremony.

The same can reasonably be said about Cookies' grand opening. According to a rep for the company, that first day of sales brought between 400 and 450 people through the doors of the dispensary — a good day for retail no matter which way you slice it.

That enthusiasm among the store's customers is predictably matched by those on the receiving end of those sales as well.

"It's exciting. It's, uh — it's really exciting," Corrado says, marveling at the crowds at the event. "We're definitely excited to see what's gonna happen."