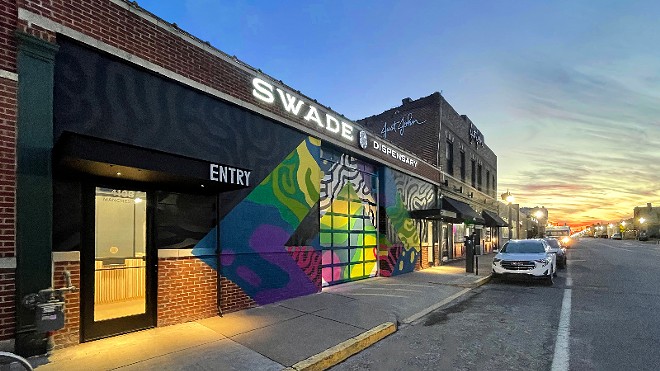 Dispensary employees, as a group, must be the cheeriest subset of retail workers out of the whole lot.

That's not to imply they are dipping into their employers' stash or anything, nor would I suggest that their jobs are particularly easy. But so far my experiences purchasing weed in St. Louis' nascent medical marijuana industry have consistently involved dealing with some of the friendliest, most happy-to-be-here workers I've seen in my many years of exchanging money for goods. It feels like there's a certain pervasive sense of wonderment that we're even able to do this right out in the open — after all, not long ago both buyer and seller would be looking at potential jail time for the things that happen within a dispensary.

I may be projecting. As a man who has run afoul of the legal system repeatedly over the years due to weed — and who, for a period of time, even had to submit to the indignity of filling a cup with urine on a regular basis while an agent of the state employed mirrors to stare at my ding-dong from three different angles — I can certainly attest that not having to worry about all that shit is an absolute blast for me.

But I suspect that, for now at least, while the novelty is still fresh, that feeling probably extends to the staff at a dispensary, too. And no dispensary that I've visited so far has left me with that impression more than the Grove location of Swade Cannabis (4108 Manchester Avenue, 314-924-6503).

Nestled between Tropical Liqueurs and Just John Night Club, Swade's Grove spot had only recently opened its doors when I came to visit. Upon stepping inside I found a waiting-room area to the right and a front desk manned by a woman in a Swade-branded face mask to the left — the first of several downright pleasant employees I'd interact with on this visit.

Upon giving her my ID, medical card, phone number and email address, I was asked to pull my own mask down and look directly into a surveillance camera so that the shop could have my ugly mug on file. She explained that this is so that they know who they are doing business with — a security measure, it would seem — and that she expects it will no longer be required once mask mandates are no longer in effect. In any case, it wasn't a big deal.

My dumb face entered into the record, I stepped into the floor of the shop. The dispensary itself is a sight to behold, a "statement space" of architecture and design, according to a press release announcing its opening. As the flagship of the Swade brand and its third dispensary in the St. Louis area, this location reads almost as a piece of art you can walk around in, thanks to the work of several locals. It was designed by MIN+ Architecture, with thoughtful flourishes including a colorful custom mural on the front of the building by Jayvn Soloman, an illuminated ceiling print by Dave Bour at SuperDog Content and Douglas fir benches by Mwanzi Co.'s Jermain Todd. In total, it just feels cool, and fitting for the Grove's overall vibe.

I was led by helpful employee number two to the "Bud Bar," where helpful employee number three stood behind a table holding a series of flower-filled illuminated jars with magnifying glasses built into their lids. At the time of my visit the shop had Miracle Alien Cookies, Critical Mass, Pineapple Upside Down Wedding Cake, Purple Trainwreck and Vanilla Kush on hand. As I geeked out staring at the various strains in their magnified state, the now-three employees standing in the room with me each excitedly spoke about the products with an enthusiasm that frankly just can't be faked.

I took my wares across town to the home of my former dealer, Mr. Nickname, who I knew happened to also have some Blue Dream on hand. We stood in his backyard on a gorgeous, sunny spring day and got to work comparing notes. A wildly popular sativa-dominant hybrid made by crossing Blueberry with Haze and rated at 21.25 percent THC, my Clovr-branded pre-roll met my expectations and then some, bringing a familiar relaxing euphoria and a sense of focus and energy to my state of mind.

Mr. Nickname evidently experienced similarly energizing effects from his stash. Within fifteen minutes of smoking I watched him fix a broken water feature in his backyard, drag a grill out of his shed to clean it off and then get some charcoal going. In other words, couch-lock is not a concern with this strain — and if the fact that I left before the burgers hit the grill is any indication, it's not exceptionally appetite-stimulating either (although I suppose Mr. Nickname might disagree). 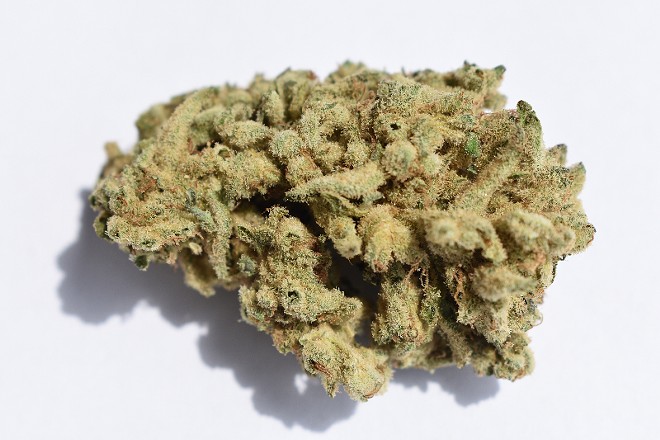 The following day I dipped into the Miracle Alien Cookies. A Sinse-branded cross between Alien Cookies, Columbian Gold and Starfighter with a THC rating of 16.21 percent, the hybrid strain is absolutely eye-popping to look at, its fluffy, pale green buds downright fuzzy with trichomes. I purchased this one pretty much based on its appearance alone — Swade did well by using those magnifying jars. Upon opening it up I was met with a strong citrus bite, which gave way to a rich grassy smell as I broke up the slightly sticky buds. On inhale it had a flavorful fuel-like taste that I could feel way up in my sinuses, and I was coughing before I got through with the bowl. My budtender at Swade said this strain is pretty much a 50/50 hybrid of sativa and indica, and that checks out based on my experience — I felt relaxed but not debilitated, I was able to stay productive but not super focused, and the munchies didn't really come into play.

I viewed the Blueberry Wana Gummies with some hesitation. I've long thought myself to have a pretty high tolerance for edibles, but my previous week's experience with a Keef Bubba Kush Root Beer — which absolutely knocked me on my ass upon consumption — had me feeling more cautious. The gummies come in a childproof pack of ten, each containing ten milligrams of THC; since the root beer that had laid me out so thoroughly the week prior contained a whopping 100 milligrams of THC, I played it safe and ate just three of the gummies, which were fruity and not too sour, with only a hint of earthy cannabis taste. That seemed to be the sweet spot — about an hour later my stomach started rumbling, then a wave of relaxation washed over my body and I found myself with an unmistakable case of the giggles. Time seemed to slow down as well, and my chronic pain was suitably soothed — all consistent with the gummies' status as indica-dominant.

It's easy to see why the employees at Swade seemed so damn cheerful — as an overall environment, the shop is artsy, unique and unmistakably hip, and its wares handily get the job done. During my visit one staff member mentioned that business had been slow that day, but said he expected that things would pick up once word got out. I have absolutely no doubt in my mind that he is correct.

Starting this week, we’re introducing a new feature to this column. Welcome to Higher Thoughts, wherein ol’ Tommy Chims smokes one strain from this review — in this case, Miracle Alien Cookies — and then immediately writes whatever comes to mind in the hopes of giving you, dear reader, a clearer picture of its overall mental effects: no rules, no predetermined word counts and, most crucially, no editing. Here we go:

How come there aren’t more smoking-hot-monster movies? We sorta went through a whole thing with that a few years back with the Twilight series — hot vampires and sexy werewolves were all the rage as I recall — but are we really content to leave it at that? I want to see all of the hot versions of the monsters. A smoldering Swamp Thing, a breathtakingly gorgeous Mothra. Hugefoot, if you get my meaning. Think “W.A.P.” meets the Monster Mash. Sure, Godzilla Vs. King Kong is great and all, but what if we could also be horny as fuck about their ripped lizard abs and chiseled monkey jaws while watching it? Missed opportunities, is all I’m saying.


Thomas K. Chimchards is RFT's resident cannabis correspondent and hot monster admirer. Email him tips at [email protected] and follow him on Twitter at @TOMMYCHIMS. 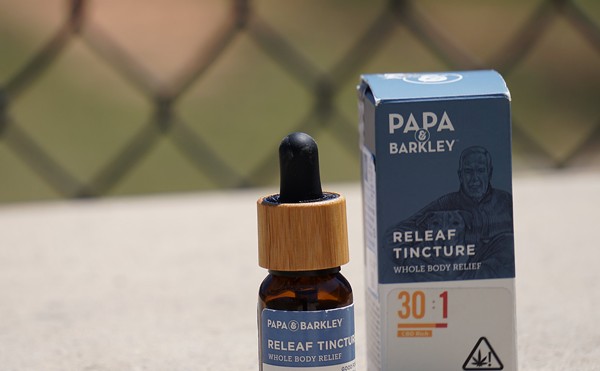