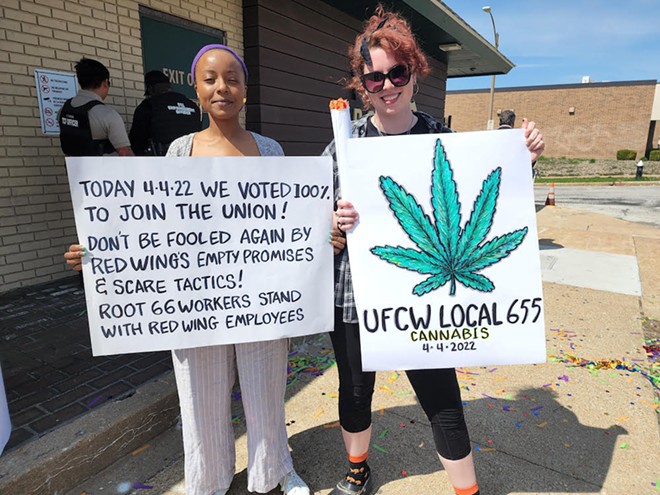 Courtesy of UFCW Local 655
From left, Joanna Njama and Em Holmead stand outside Root 66 on South Grand Boulevard after employees voted to form a union.

Em Holmead loved working in the medicinal cannabis industry. As someone who uses cannabis for their own chronic pain and anxiety, Holmead enjoyed helping patients find similar comfort as a cannabis advisor at Root 66 Dispensary off South Grand Boulevard.

Yet, after working there for several months, Holmead felt employees deserved more than what they earned, for their long hours, low wages and scant benefits. So, in January, Holmead, who uses they/them pronouns, helped start a campaign to unionize at Root 66.

The effort became successful earlier this month, after all eight workers involved chose United Food and Commercial Workers Local 655 to represent them. But before that, in March, Holmead lost their job, and so did coworker Joanna Njama, who also helped lead the unionization efforts. Both allege they were fired for their union leadership.

“They kept saying that we were spying on them,” Holmead says of a time they and Njama viewed footage while a company leader held meetings with employees. They add that Root 66’s cameras do not record audio. “I was the lead of the campaign, I organized all of it, but they found a way to get me out of there.”

Federal law grants all employees the right to organize a union, and no one can be fired or disciplined for engaging in union activity.

Meetings between the union and Root 66 began this week. Employees at the company have several concerns, but three main issues, according to UFCW 655 president David Cook, have to do with securing better wages, better security on the job, and better benefits, particularly health benefits.

For Holmead, the final straw was when, after a water main break down the road, the city turned off the dispensary’s water, yet the dispensary’s employees were told to keep working. They remained at work for the next five hours without running water or a flushable toilet.

In an emailed statement to the RFT, Root 66 director of retail, Rachel Shenk, said Root 66 offers “industry leading pay, as well as a safe, upbeat and compliant work environment for our team members.”

“We have tremendous respect for our cannabis advisors’ right to choose the path they deem best for their careers,” Shenk continued, “and will always proudly support each and every one of our valued team members in their pursuits to reach the pinnacle of their noble and rewarding profession within our expanding organization.”

Root 66 is owned by St. Peters-based G.F. Wellness and was the first dispensary to open in St. Louis City, in 2020.

Root 66 also has locations in St. Peters and Downtown. A proposed fourth location in Des Peres may be in the works, but it doesn’t look very promising as neighbors object to its proximity to a tutoring center.

The firing of Holmead and Njama, shortly before Root 66 employees were scheduled to vote on the unionization proposal, only galvanized Root 66 workers’ determination to unionize, says Collin Reischman, a spokesperson for UFCW Local 655.

“Frankly, all that did was prove how much they need a union,” Reischman notes.

The disputed video camera incident took place in early March, when, according to Holmead, they and Njama watched the store’s live camera footage while the company’s president had one-on-one conversations with employees during lunch hours. Holmead says they were making sure the store had enough people on the floor and looked at camera footage to check when the conversations were over.

Njama claimed watching camera footage was part of their jobs: “We’re supposed to look when customers come in and check out the sales floor and watch our coworkers' backs.”

Holmead says the company called their actions “a security risk.” An investigation followed after company leaders said someone reported Holmead and Njama for watching camera footage, according to Holmead. They were questioned for half an hour and later let go. Holmead contacted the union shortly after.

Root 66 Dispensary now faces an unfair labor practice charge with the National Labor Relations Board. A lawyer filed the charge on behalf of UFCW Local 655 on March 7 in protest of Njama and Holmead’s terminations.

Janine Martin, the lawyer on Holmead and Njama’s case, says the standard remedy for cases such as these, if NLRB finds sufficient evidence to support the charge, is a “make whole” remedy, where terminated employees are reinstated with back pay and lost benefits.

The NLRB’s regional office would also then issue a complaint if it finds the charge has merit.

That complaint, if not settled, will ultimately be tried in front of an administrative law judge, who will make the decision about whether a violation of the National Labor Relations Act occurred and if so, what remedy to order, according to Martin.

Njana claims she was fired because of a policy that was “created out of thin air.” Reischman believes the union has a strong case.

Employees at Root 66 Dispensary have not been alone in their unionization efforts. Reischman says UFCW Local 655 is engaged with employees at four different medical cannabis companies in the St. Louis area, though he did not give company names.

Workers at Swade Cannabis in the Grove filed a petition for a union election in January, though the petition was withdrawn soon thereafter.

Former Swade employee Bernadette Faure says employees decided to work with management on their issues. Faure says she later gave two weeks notice, but before those two weeks were over she was fired for something unrelated to union activity.

Jack Haddox, director of retail operations for Swade, says the company has offered no changes to wages or benefits since employees attempted to unionize.

“The only area we’ve changed is how often and effectively we keep lines of communication open for all employees,” Haddox writes, in an email to the RFT. This includes weekly “town halls,” where Haddox discusses ideas and policy changes with employees. Haddox says the company also launched a company-wide platform for employees to submit anonymous comments.

Following her termination from Root 66 Dispensary, Njama started a social media platform called Missouri Cannabis Workers for Higher Standards. On Facebook and Instagram, she posts encouraging messages for cannabis workers who may also struggle with low pay or other issues.

“Cannabis workers deserve so much better,” Njama says. “I think it’s early enough in the industry where we can secure something that’s better for us.”

Holmead no longer works in the medicinal cannabis industry but is proud of their former coworkers’ success at unionizing.

“I didn't want to go anywhere at the time, but in a way I am happy it happened the way it did because of the outcome we received,” Holmead says. “I’d do it all again – I’d get fired over and over again if this was the outcome.”

Update: Several pronouns in this story were wrong and have been updated. We sincerely regret the error.