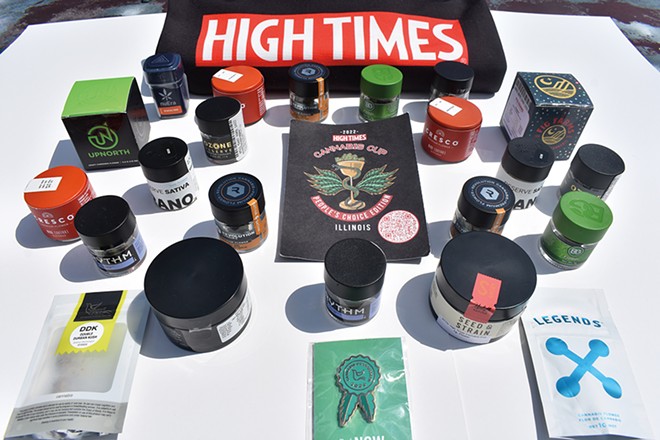 It's Cannabis Cup season in Illinois this month, meaning thousands of the Land of Lincoln's most dedicated stoners are hard at work judging the state's top-shelf weed offerings across a variety of categories in the noble pursuit of crowning this year's best of the best.

It's also the third year that the competition has existed in its People's Choice form, which sees judging duties opened up to the public at large, with some 2,000 sample kits dispersed for purchase at the state's dispensaries. Those kits were compiled from submissions by Illinois' top cultivators in the categories of indica flower, sativa flower, hybrid flower, pre-rolls, concentrates and extracts, vape pens and cartridges, gummy edibles, non-gummy edibles, medical flower, medical vape pens and medical edibles. After all is smoked, vaped and eaten, the annual affair will conclude with a virtual award show on Sunday, September 18.

Historically, judges for the Cannabis Cup were hand-picked by High Times magazine from a pool of growers and other weed influencers — around 200 people in total — from across the state in which the competition is held, with their work culminating in a live award show. That framework, like everything else, got upended in 2020 due to the pandemic making in-person events impossible. High Times, rather altruistically, responded by putting together 10 times the number of sample kits from previous years and allowing the general public to join in on the fun.

According to Mark Kazinec, director of events and competitions at High Times, the new way of doing things was conceived to keep the good times rolling even as COVID-19 brought an unprecedented level of uncertainty into the proceedings. The thinking was that we couldn't meet in person, sure — but we could damn well still get high in our houses.

"The People's Choice model was launched right when the pandemic hit because everybody is sitting at home smoking weed — cannabis is deemed 'essential' and people are getting paid stimulus checks to sit at home and smoke their weed," Kazinec tells the RFT. "We couldn't do events, but we wanted to still bring the Cannabis Cups to the people all across the country."

Though it was born of necessity, the People's Choice Edition caught on, and High Times has moved to that model as a matter of practice. Kazinec points out that it's far more beneficial for the competing companies to get feedback on their products from a wider swath of the population, and the people who get their hands on a judge kit appreciate being a part of the process.

"It means a lot to the people to get these types of kits and help crown the best of their state," he says. "It's democratizing it, opening up to the people, so we are getting the longtime OG growers who have been in the game for 30-plus years, but we're also getting the new soccer moms who are trading out their glass of wine for a joint at the end of the night."

This reporter is one of the newcomers to the world of Cannabis Cup judgment. I picked up a kit for the sativa category at Ascend's Fairview Heights location, which is about 20 minutes east of St. Louis. Within a stylish tote bag sporting the competition's logo were one-gram samples of 22 different strains with colorful names like Green Crack, Granny MAC, Double Durban Kush, Frost Donkey BX1 and Spirit Quest. The kit was priced at $299, but High Times very kindly picked up the bill for me. (Watch this space for future reviews of the products found within.)

Also in the bag was a small card with instructions and a link to an online judging portal. The process involves logging in with a password unique to you, sampling all your samples one by one, and logging your findings for each. High Times asks for rankings on a scale of 1 to 10 and a few sentences' worth of comments. That feedback will help determine the winner of the competition before making its way to the growers of the strains, to help increase the quality of their products.

"It's an amazing opportunity for brands to get their product into the hands of way more people and to actually get real feedback from different people from all walks of life," Kazinec says. "Whether it's the growers who know how to talk about myrcene and different terpene profiles, or just somebody who's a little bit new to cannabis, and they just want to talk about how it makes them feel and give us comments on, 'Hey, I smoked a joint with my girlfriend and went on a hike or fell asleep on the couch with a dozen cookies in my lap.'"

Judges have until September 4 to finish reviewing everything in their kits, and High Times will be hosting an online award ceremony on September 18 (at 4:20 p.m. of course). Though the People's Choice Edition is here to stay, Kazinec hopes that the award show will be able to return to being an in-person affair in 2023.

"We haven't done a Cannabis Cup festival in the past two years," Kazinec says. "We're hoping to bring those back next year. But it would still be People's Choice ... because it's been so beneficial for all parties involved."