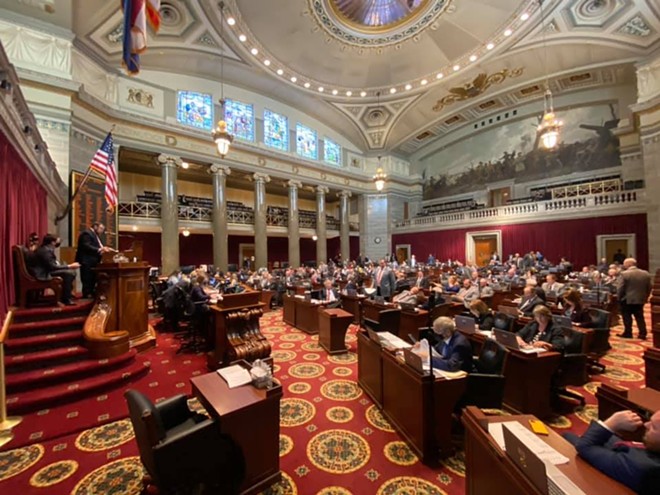 Update, May 18: An amendment that sought to open a door to freedom for non-violent drug offenders was mistakenly removed from the final version of Senate Bill 26, ending any chance for the measure's passage this year.

The reversal is a crushing blow to inmates trapped in non-parolable sentences, as well a bitter surprise for the measure's sponsor, Boone County Republican Rep. Cheri Toalson-Reisch, who believed the provision had already passed on May 14, before the end of the legislature's final day in session.

Earlier today, RFT first reported (in the story below) that the measure had passed and was on its way to the governor's desk. The reporting took its basis from Toalson-Reisch herself: On Friday, she had announced on Facebook that her amendment — which would make some "prior and persistent" drug offenders eligible for parole — had passed as part of sweeping public safety bill.

"This will open the door for more to apply to the Parole Board. This is not a 'get out of jail free' bill," Toalson-Reisch wrote of her amendment. "They have paid their debt to society and can ask for early release."

But today, several hours after the RFT story ran, Toalson-Reisch contacted this reporter with stunning news: Instead of being on the way to Gov. Mike Parson, she'd learned that her amendment had been struck from the House-approved version of Senate Bill 26.

"I'm very upset," she says in an interview.

According to Toalson-Reisch, it was a legislative "drafter" in the Senate who had removed her amendment prior to the final vote, though the reason for that deletion is unclear: With dozens of amendments added to the bill in the last days of the legislative session, it was the "drafters" who received the final instructions for stripping provisions from the bill before the House vote.

On Monday, Toalson-Reisch was still in victory mode. She told RFT that she had been "assured" by House leadership that her amendment would appear in the final bill when its text was released online — suggesting that even the top lawmakers were not entirely aware of what was, and was not, part of the bill they had just voted on.

"They were either misinformed or not knowledgeable about what was going on, and now we're going to have to bring it back next year," Toalson-Reisch says.

She added, "Once I find out which drafter thought this was wrong, whatever they were thinking, we're all going to sit down with the drafter. We're going to have a talk and make sure we're all on the same page and make sure this doesn't happen again."

Toalson-Reisch says she plans to refile the bill next year.

An amendment-stuffed public safety bill heading to the governor's desk underwent dramatic changes in its final hours — but its final version retains an amendment that means the difference between freedom and decades in prison for dozens of drug offenders.

The bill's passage on Friday is the latest chapter in the strange life of the so-called "prior and persistent drug offender statute." Enacted in 1989, the law transformed low-level drug charges, even non-violent ones, into decades-long prison sentences.

The law set a ten-year minimum prison term for offenders with two prior drug convictions, but it was the elimination of their eligibility for parole that ensured these sentences persisted far beyond the average time served by other prisoners. Losing a chance for parole, or early release, is a rare type of sentencing "enhancement" generally applied to murderers or repeat violent offenders.

But undoing the damage of the uniquely harsh drug law has proven difficult. Although the law was repealed and replaced in 2017, Missouri's Supreme Court in 2020 issued a hope-crushing ruling against "prior and persistent" offenders, rejecting arguments that the repeal should be applied retroactively.

Legally speaking, the ruling left drug offenders in what Boone County-area Rep. Cheri Toalson-Reisch calls "the crack" — trapped in prison sentences governed by the pre-2017 criminal code despite the repeal intended to help them.

Under the measure introduced this year by Toalson-Reisch, parole eligibility would be restored to drug offenders convicted of first and second-degree drug trafficking who have served at least ten years of their sentence. A parole board would also have to determine that a person has a "reasonable probability" of not reoffending if released.

However, the measure's targeting of trafficking charges means it will affect only a portion of the roughly 230 total "prior and persistent" drug offenders still serving their lengthy sentences. An analysis from the Department of Corrections identified 35 offenders serving time for trafficking, eight of whom have passed the ten-year mark in their sentences.

But given the length of the sentences, the chance at parole could be life-changing. Though he was a small-time dealer and heavily addicted at the time of his 2003 arrest, Timothy Prosser, the subject of a 2016 RFT cover story, is still currently serving a life sentence without parole for a meth-related trafficking charge, a punishment so extreme that the even prosecutor on his case now calls it "unconscionable."

In the future, Toalson-Reisch says that she plans to file legislation that could expand parole eligibility to other "prior and persistent" drug offenders serving no-parole sentences under the old law.

Toalson-Reisch's amendment was among a flurry of additions stuck to Senate Bill 26 last week. It was a last-ditch effort, and it meant attaching her proposal to a magnet for controversy.

But when the final House vote was taken, several controversial measures were quietly killed, including the ones seemingly targeting protesters with a newly created crime for intentionally blocking a roadway.

What the final bill retained, however, were several key criminal justice reforms, including a ban on police chokeholds and creating a police use-of-force database.

For drug offenders still stuck "in the crack," the bill promises to do what the 2017 repeal could not, restoring parole and giving them an opportunity to prove their rehabilitation.

It's not just the legislature that's shown interest in correcting the injustice: Since 2020, Gov. Mike Parson has used the clemency powers of his office to commute the sentences of nine "prior and persistent" drug offenders. Now, Senate Bill 26 and Toalson-Reisch's amendment will head to the governor's desk for Parson's approval.

Editor's note: A previous version of this story's update incorrectly referenced the actions of House drafters on the bill prior to the vote. The story has been corrected.

Missouri Adults Could Buy Legal Weed as Soon as Tomorrow