The cannabis confections deliver a roller coaster of flavors and a smooth, energizing high 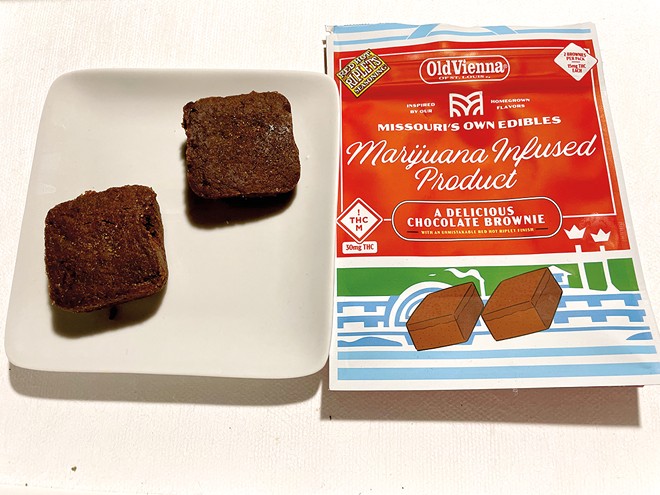 TOMMY CHIMS
Missouri Own takes a familiar form, the pot brownie, and injects it with Riplets magic.

Following up on the runaway success of THC-infused Red Hot Riplets must be a daunting task.

The popular product's June launch was met with a tidal wave of enthusiasm among the weed- and chip-purchasing public — one that saw bags flying off the shelves, with many dispensaries struggling to keep them in stock for more than a day or two at a time. The rollout was so successful that it even earned Show-Me Organics, the cannabis company responsible for the collaboration through its Missouri's Own edibles division, a coveted Clio Cannabis advertising award in September.

It's a munchies match made in heaven, to be sure — easily the freshest batch of Riplets this reviewer has ever enjoyed — and the accompanying high certainly sweetens the, uh, pot, if you can pardon the pun.

But perhaps even sweeter, if you can endure yet more wordplay, are the fresh new Red Hot Riplet Brownies that Missouri's Own has now entered into the Missouri medical-marijuana market. In partnership once again with Old Vienna, the company's latest offering takes that Riplet magic and injects it into a familiar pot-brownie form, adding a spicy kick to the classic cannabis confection. The new product was launched just last month and has since found its way to dispensary shelves across the St. Louis area.

According to Show-Me Organics CMO Tony Billmeyer, bringing the unique brownies to market was a no-brainer.

"We're always looking for innovative ways to deliver interesting and fun medicinal cannabis experiences," Billmeyer tells RFT, "and the reception of the Red Hot Riplets themselves necessitated some sort of follow-up. And so this brownie was the logical next step, going back to a traditional pot brownie — but also doing it with a twist."

Billmeyer notes that the flavorful concoction is similar to a brownie cooked with paprika in it, bringing what he describes as a "roller coaster" of sweet to hot flavors to keep your taste buds on their toes. He says the response so far has been overwhelmingly positive, though he concedes that the chips themselves are certainly a hard act to follow.

"People are really excited about them. We definitely had a bigger reaction to the chips, I think naturally," he says. "But people are excited to see that there's more coming."

Count this reviewer among the excited. As a huge fan of all the elements involved in this magical new endeavor, from weed to brownie to chocolate to chip, I was ecstatic to get my hands on some myself. The brownies come in a two-pack that retails for $18, with a total of 30 milligrams of THC per package. The instructions on the back of the bag suggest that you eat only a quarter to a half of a brownie and then wait an hour to evaluate its effects, which frankly is a hilariously impossible test of willpower that only the strongest among us could possibly endure.

I am not strong, and therefore I put back both brownies over the course of about two minutes. Reading the packaging, I will admit that it was a bit odd to see garlic and onion powder listed as ingredients for a sweet treat — but I was undaunted, and blissfully so. The chocolatey squares boasted a nice dense consistency and were delightfully moist, coming on with a sweet and rich flavor at first before delivering a familiar spicy finish. After a few bites, I could feel that same heat in the back of my throat as that which accompanies a handful of Riplets, as well as a faint but present weediness that often accompanies THC-infused edibles. A roller coaster indeed. As I washed the last of my brownie down with a swig of milk, I noted that these would be absolutely delicious with a scoop of vanilla ice cream on top.

Within an hour or so I started feeling the effects, with some dry mouth setting in and a puffiness under my eyes. The evening of my review had been preceded by an exciting mail day that brought 2009's PSP edition of Grand Theft Auto: Chinatown Wars into my possession, so I fired that up and quickly found myself totally in the zone. I was utterly delighted by the MF DOOM/Ghostface Killah song that serves as its title track and endlessly amused by the fact you can sell weed in this game, but only if you're willing to kill the cops that try to stop you. Oh, how the times have changed.

Feeling energized, I put the game down and approached a yoga ball that recently appeared in my home. My spastic attempts at exercise confused and alarmed my dog, who to be fair is not remotely used to seeing me do anything that even slightly resembles exercise — as good a testament as any to the high's energizing, sativa-like effects. I was still pleasantly toasted three hours after I'd eaten my brownies and didn't even feel any need to dip into any flower to close out the night, as is usually customary.

In all, Missouri's Own Red Hot Riplet Brownies are a worthy successor to their popular parent product. While they admittedly bring a bit less novelty than the chips themselves, their unique flavor profile and smooth, energetic high make them a must-try among fans of THC-infused sweet treats.

And to think, no police officers had to die to bring them to market. Remarkable.