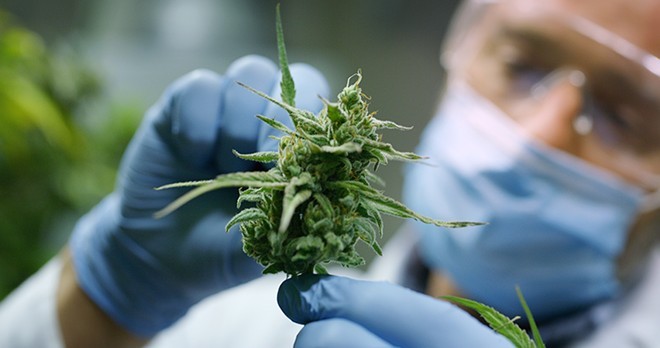 SHUTTERSTOCK
As regulations loosen on who can study cannabis' effects, researchers are finding it may be more beneficial than currently known.

Madison Matthews was in desperate need of relief.

Between 2016 and 2021, the 12-year-old East Lansing girl had been hospitalized dozens of times with unspeakably intense pain from sickle cell anemia. Her appetite was diminishing, and the only way to maintain healthy nutrient levels was supplements.
The opioids she took for pain management were no longer working.

In the first three months of 2021, she spent more than 55 days in the hospital, 17 of those in pediatric intensive care. She’d gone from using crutches to using a wheelchair.
At one point, she says, she talked about “wanting to go to heaven and no longer be in pain.”

Then in April of last year, her mother Charlotte Matthews turned to cannabis to do what the opioids and traditional treatments couldn’t: bring her daughter’s painful disease under control.

“When things kept getting worse for her, I knew I had to make a different choice,” Matthews says. “It was scary to me because the medical field had nothing else to offer.”
They met with Cathleen Graham, a registered nurse who provides medical cannabis counseling and wellness plans.

In less than a month, the cannabis dramatically improved Madison’s condition, reducing her pain and inflammation and opening up her blood vessels.

Madison hasn’t been hospitalized since. She weaned off of opioids and began walking, playing, riding a bike, catching up on school and just being a kid again. She even plans to enroll in gymnastics this year.

“My thought was that I could decrease the inflammation and help with opening her blood vessels up,” the CEO and founder of Cannabis Nurse and a clinical director at Hayat Provisioning, a dispensary in Hazel Park, tells us. “I had no idea that it was going to change her lab values so dramatically.”

But since it’s illegal on the federal level, the medical establishment is hesitant to embrace it, and clinical trials on cannabis’ therapeutic efficacy are hamstrung by federal restrictions and a lack of funding.

As a result, countless people with treatable medical conditions are deprived of relief.
But as attitudes toward marijuana change, state and federal governments are beginning to authorize and fund research aimed at unlocking the full potential of cannabis for medical and scientific purposes.

For decades, scientists were only permitted to study subpar marijuana that was grown at a facility at the University of Mississippi. In May 2021, the Drug Enforcement Administration announced it was in the process of allowing researchers to obtain cannabis from U.S. companies.

In July, the federal Substance Abuse and Mental Health Services Administration eliminated language that had prevented grant funding for providers that allowed patients to use cannabis for mental-health treatment.

And in early August, a Senate committee approved a measure that would enable doctors at the U.S. Department of Veterans Affairs to recommend cannabis to military veterans in states where medical marijuana is legal.

Funding for long-awaited clinical trials also is becoming available. In August, the Michigan Marijuana Regulatory Agency awarded $20 million in grants for two research projects that will study the effects of cannabis on military veterans with mental health disorders. The Multidisciplinary Association for Psychedelic Studies, or MAPS, received nearly $13 million to examine “the efficacy of marijuana in treating the medical conditions of U.S. armed services veterans and preventing suicide.” The study is designed to evaluate the safety and efficacy of cannabis as a treatment for post-traumatic stress disorder.

“Michiganders are granting nonprofit researchers the opportunity to establish whether marijuana is helpful for veterans with PTSD,” Rick Doblin, founder and director of MAPS, says. “If so, we will seek to return that generosity by developing a public-benefit cannabis pharmaceutical product that would be eligible for insurance coverage, just like any other pharmaceutical drug.”

Wayne State University received a $7 million grant to expand its research into potential therapeutic effects of cannabis and cannabinoids to reduce symptoms of PTSD and depression, noting that more than 6,400 veterans committed suicide in 2018.

At UBaked, a Burton, Michigan-based company that grows high-quality flower and makes concentrates for medical and recreational dispensaries, the focus goes beyond traditional marijuana products. The company is building a molecular lab as it explores the medicinal possibilities of cannabis.

On staff is Ron Noble, a geneticist and food scientist who will be expanding his knowledge of marijuana by starting a master’s program in pharmacy with a focus on cannabis’ psychoactive compounds at the University of Wisconsin.

With the help of a molecular biologist with an expertise in THC from Purdue University, UBaked plans to focus on developing new varieties of cannabis for medicinal purposes.

“As research continues and more funding becomes available, the sky’s the limit on what cannabinoids will find and how they respond to the body and the mind,” says Robert Dodge, owner and CEO of Ubaked. “They haven’t scratched the surface of the benefits. We’re really going into the unknown.”