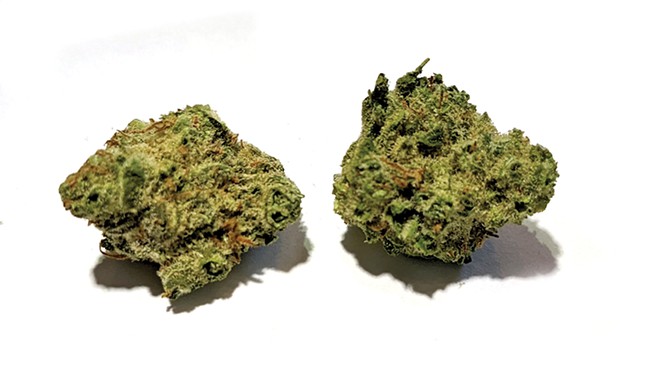 FAMOUS MORTIMER
At only $20 for an eighth, Flora Farms' Early Lemon Berry makes for a nice cheap smoke.

If you're anything like me — a middle-aged Englishman with an ever-increasing variety of aches and pains (new favorite: left shoulder) and an ever-decreasing bank balance — then you may occasionally allow yourself to be swayed by special offers in the cannabis market. But just how effective are the varieties at the lower end of the price list? Let's find out!

In the interest of trying out some wallet-friendly weed, I picked up some Flora Farms-branded Early Lemon Berry from the lovely 3Fifteen Primo location on Chippewa, with the price set at a very reasonable $20 for an eighth. (Well, let's be honest, $20 is about as cheap as I've ever seen an eighth, at least in Missouri.) Its description promised a relaxing high, with its (relatively) low levels of THC making it a "great choice for daydreamers looking to create."

Ethos Genetics — a Denver-based cannabis company with a name that sounds like an evil company from a '90s sci-fi/action movie, but with products that would probably have calmed down some of its crazier villains — first bred Early Lemon Berry by crossing Las Vegas Lemon Skunk and the Pink Grapefruit pheno of Member Berry RBX. The Flora Farms packet I purchased clocked in at 17.63 percent THC, but bear in mind that the same product is listed as high as 18 percent and as low as 13 percent from other dispensaries.

(Aside: While I was perusing Leafly.com and doing my research on this strain, I found a description of it which had a photo, and underneath the photo was this wonderful caption: "stock photo similar to early lemon berry." Apparently this is a fairly common practice on the site. So, just some random cannabis, then? Got it.)

Upon opening the bag, I caught a good whiff of the strain's titular lemon smell, consistent with both its name and the fact that limonene is its dominant terpene. I normally find that the "notes" in a particular strain come across to me similarly subtly as those of wine — I just smell wine. But this definitely had that prominent lemon scent, which was nice. It ground up quickly and without too much stickiness, as well. This cannabis was on the lighter-colored end of the spectrum, but the buds were nice and tight and had some orange hairs throughout.

At the THC level it has, as well as its budget price point, I didn't expect this strain to have any of the extreme effects in terms of keeping you welded to the sofa, or...whatever a high-powered sativa would make you do. Run around? Read books extra fast? In any case, I found it pleasant to smoke, with a nice mild flavor and smell, unlike whatever the guy three houses up from me tends to smoke in the morning, which wafts down to me when I'm taking my dog for his morning stroll. I do hope he doesn't operate heavy machinery after doing that!

Early Lemon Berry definitely comes across as sativa-dominant in its effects, but it definitely helps with pain-relief needs — my sciatica did not bother me anywhere close to as much as it normally does (even the left shoulder got some relief). Plus, I found that I could still concentrate on whatever it was I was doing, which definitely works for me, too.

In all, it was a nice high with decent pain relief, but nothing to be bowled over by. It's really a matter of expectations, as it is with any product at the lower end of the price scale. Will those $30 earpods do the same work as the expensive Apple version? In some ways, yes, and in other ways, no. You just have to know what you're getting, and with Flora's Early Lemon Berry, you get a solid budget product.