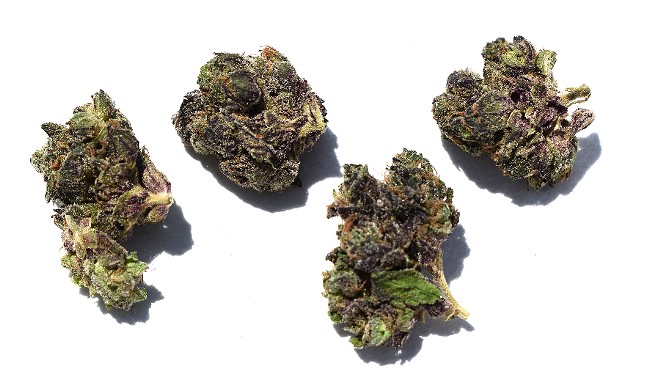 TOMMY CHIMS
Good Day Farm’s Rainbow Sprinkles strain is quite colorful, in keeping with its name.

Good Day Farm certainly knows how to attract some attention.

The Arkansas-based cannabis company made a hilariously big splash when it entered the Missouri medical marijuana market back in February, marking the occasion with the creation of a sewer-lid sized gummy weighing 135 pounds and containing 116,000 milligrams of THC. The enormous offering set a record as the largest THC-infused gummy in the world, and is in fact so massive and potent that it cannot legally be removed from the facility in which it was created.

Then, in March, the company released a new strain of flower with the eyebrow-raising moniker Titty Sprinkles, named in reference to its breeder's mother's battle with breast cancer. That strain was specifically cultivated to help alleviate the symptoms that can arise from cancer treatment, and 10 percent of its profits are donated to breast cancer research.

Most recently, Good Day Farm has rolled out a line of products dubbed Rainbow Sprinkles in honor of Pride Month. The limited-edition cultivar comes in the form of flower and vape carts wrapped in colorful packaging sporting a rainbow (naturally), and 100 percent of its profits up to $10,000 will be donated to LGBTQ organizations in Missouri and Arkansas, the two states in which the company operates.

Here in Missouri, that money will go to a Columbia-based group called the Center Project, which runs a volunteer-led community center specifically focused on catering to the needs of LGBTQ people in the area. According to Good Day Farm's Chief Marketing Officer Laurie Gregory, the arrangement comes as part of a deliberate effort to support the communities in which Good Day Farm's operations are based.

"We knew we wanted to support LGBTQ+ efforts in honor of Pride Month and researched local organizations that were making a positive impact," Gregory tells RFT. "Our cultivation is located in Columbia, and that's where the Center Project is also located, so donating to them made sense, because supporting local organizations is important to us."

Good Day Farm markets Rainbow Sprinkles as what might historically have been called a sativa dominant, saying it "is known to promote positive energy and spark creativity with euphoric effects." That sounds all well and good, but one question still looms: Will it make me more gay? 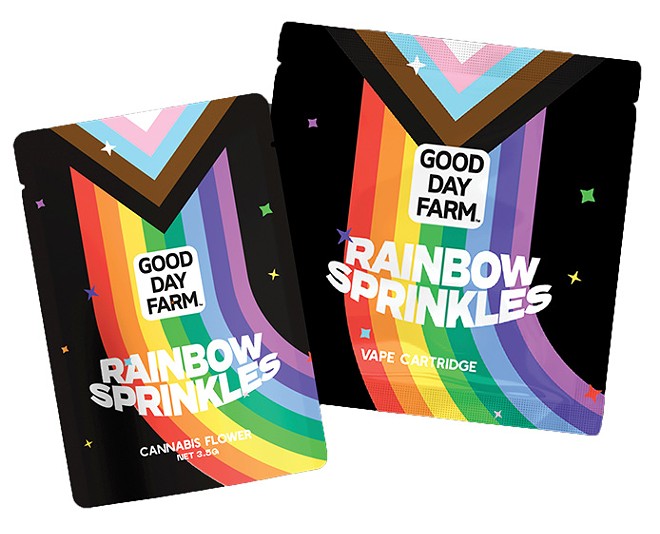 VIA GOOD DAY FARM
The cannabis company has pledged to donate up to $10,000 in profits from the new strain to LGBTQ organizations.

To get to the bottom of things, I picked up an eighth of Rainbow Sprinkles at the Greenlight Dispensary in Berkeley for $43.22 after tax. My batch was rated at 19.98 percent THC-wise, and the label helpfully displayed the strain's terpene profile as well, which includes limonene, nerolidol, linalool and caryophyllene. Upon opening the pouch, I was greeted with a spicy, fuel-like scent that hit sharply up in my sinuses, as well as some citrus notes. The buds sported clusters of long, orange hairs dispersed among dark greens and plenty of purple, and they appeared frosted, with tiny, white crystals that sparkled in the light. On breakup, that spicy smell brought some deep sweetness with it that was quite pleasant, like a magic green onion I've never used in a recipe I've never made. The buds crumbled into tiny pebbles of flower, not too dusty and not too sticky.

On inhale, I found this strain to be exceptionally smooth but not especially flavorful. Even when taking large rips I didn't cough, which is nice. After a few minutes passed, I got the distinct feeling that this was going to be more of a creeper in terms of effects, and soon enough I began feeling a bit of anxiety in my chest, common for me when it comes to more high-powered strains. "Oh boy, I'm gonna be high," I wrote in my notes.

It was about this time that I noticed my dog was staring at me with laser-like focus. The time of the day when she typically gets to go for a run around a field near my house was upon us, and she wasn't gonna let me forget it. Feeling energized, I loaded her into my car and drove the short distance up there.

Oftentimes when I walk around this field I like to kick the shit out of all the dandelions I see, thereby dispersing their seeds across the land much in the same way picking and gently blowing on them might, only more fun and violent. On this trip, I marveled at how well my efforts had been paying off, as the field was positively covered in flowery weeds that the bees were definitely into. "Sometimes nature works better if you kick it," I mused. On my way back to my home, I noted that the plots of land neighboring the field had far less flowers growing in them, only proving to me that the kicking works.

Except I was completely wrong. In my considerably stoned stupor, I had mixed up weeds in my head. The flowers that covered the field were in fact white clover, which no matter what you kick nor how hard you kick it, do not grow from dandelion seeds. I was, put plainly, incredibly high, and also fairly stupid. It was a focused and energized high though, and I found even the most mundane things to be absolutely fascinating, as evidenced by the fact I spent a considerable amount of time reading about weeds on Wikipedia when I got back home.

In all, Rainbow Sprinkles lives up to its reputation, handily scrambling my brains while still leaving me with the energy to kick some flowers. That initial anxiety I felt faded away quickly, and in its stead, I got a pleasant and uplifting high that I'll surely seek out again.

As to the burning question of whether the strain made me more gay, well, I didn't notice anything, but maybe if I smoke more I could get there. Fingers crossed.